“The extinction of the human species may not only be inevitable but a good thing.”
– Christopher Manes, Earth First!
“I suspect that eradicating small pox was wrong. It played an important part in balancing ecosystems.”
– John Davis, editor of Earth First! Journal 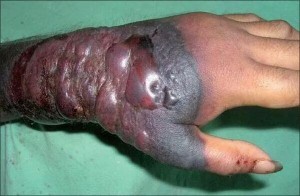 Should flights coming from West African nations be cancelled and our borders closed? According to Anthony Fauci of the National Institute of Allergy and Infectious Diseases, the answer is “No, absolutely not.” “When you start closing countries like that, there is a real danger of making things worse,… governments could fall if you isolate them.”
What kind of logic is that? How is it possible that blocking visas and the travel of people sick with Ebola and quarantining them in the Hot Zone is making things worse? Would that not be easier for the virus outbreak to be contained and allow the virus to burn itself out before it mutates?
Apparently the neighboring countries to Liberia, Guinea, Sierra Leone, and Nigeria have good judgment and have made the decision to close their borders to and cancel incoming flights from the affected countries.
Should Americans care if governments might fall in West Africa where Ebola is raging out of control, when the safety of our own citizens is at stake? We used to be insulated somewhat by our geographical location but thanks to our government’s insane politics we now have Ebola cases and the enterovirus D68 infections among American children in almost all states of our union.
American children were made sick by the illegal alien children who were bureaucratically dispersed and placed in classrooms around the country. These children did not speak English, were illiterate in their own native dialects, and lacked any knowledge of basic hygiene. In addition of lice, scabies, TB, and chicken pox, the list of infectious diseases they brought into our country is quite long.
The surge of illegal alien children has dropped, according to the Washington Times, from 10,000 per month in May and June to 3,100 in August, but the damage has already been done. (Stephen Dinan, Disease plagues illegal immigrants; lack of medications, basic hygiene blamed, The Washington Times, October 6, 2014)
At least five children have died in the U.S. with respiratory illnesses caused by the enterovirus D68 (EV-D68). The latest casualty is Eli Waller from New Jersey who died of the “polio-like illness.” Health officials “have no idea how he contracted the virus.” Michael Savage pointed out on his website that the County of Union New Jersey Department of Human Services in Elizabeth, New Jersey, accepted $1,100,766 in grants from HHS to receive shipments of unaccompanied illegal alien children.
Eli has died “to support Obama illegal-alien goals,” said Michael Savage on his website. He discussed on his show church charities and child services agencies that have received millions of dollars in grants to accept and care for unaccompanied illegal alien children infected with communicable diseases.
Dr. Savage blamed the spread of the “mysterious” virus which is no mystery to him at all, on this administration’s leftist policies of open borders. He reminded listeners that these progressives have blood on their hands. “They will infect a nation to buy another car, to buy another house, “and to push their progressive agenda.
Prof. Paul Ehrlich spelled the progressive depopulation agenda quite succinctly in The Population Bomb. “A cancer is an uncontrolled multiplication of cells; the population explosion is an uncontrolled multiplication of people…. We must shift our efforts from the treatment of the symptoms to the cutting out of the cancer. The operation will demand many apparently brutal and heartless decisions.”
Markus Bergstrom, chief information officer of Startup Cities Institute in Guatemala, wrote an opinion piece in The Washington Post, “Losing the Birth Lottery.” http://www.washingtonpost.com/opinions/losing-the-birth-lottery/2014/10/03/d1806338-4a69-11e4-a046-120a8a855cca_story.html
According to him, it is “borderism” and “racism” that are preventing the Mexicans south of the border to come and go as they please, borders are a nuisance . I wonder if Bergstrom heard of Sgt. Tahmooressi who is languishing in a Mexican jail for having accidentally crossed the border into Mexico.
A Mexican citizens and an American citizen from New Mexico are only separated by a birth certificate, having been born on the wrong side of the fence, he said. I don’t know what fence he is talking about because our southern border is wide open into the U.S., we even provide charter flights and buses to come here illegally, grants to care for them, medical care, welfare, Social Security cards, and many benefits paid for by the American taxpayers who had paid into the Social Security “trust fund” for decades. We also have the 14th Amendment with birthright citizenship that provides pregnant illegals with convenient “anchor babies.”
In Bergstrom’s opinion, we must address this geographical injustice and transform the United State into a European Union with open borders because the mass migration from poor countries to developed countries in Western Europe worked so well, Europe is not a basket case of financial bankruptcy and multicultural strife, violence, beheadings, and overall failure.
Bergstrom says, “… borderism and racism are ultimately questions of ethics. Inheriting the wrong genes is no longer punishable by law, but inheriting the wrong citizenship is. Borderism is thus a sibling of racism as it subjects our rights to the lottery of life. While many opportunities in life are unequally distributed, our legal rights must always be universal.”
There you have it, progressivism on parade. We are all global citizens now and borders and sovereignty are a thing of the past.
©Ileana Johnson 2014