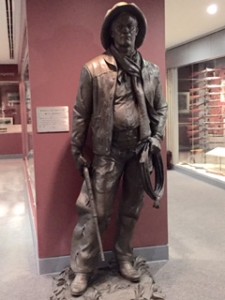 Charlton Heston bronze statue as “Will Penny” Photo: Ileana Johnson 2015
The National Firearms Museum is located in one of the richest and more liberal places in the country, Fairfax, Virginia. The Freedom’s Doorway of the museum is graced by a quote from Charlton Heston, “The doorway to freedom is framed by the muskets that stood between a vision of liberty and absolute anarchy at a place called Concord Bridge.”
Among the 14 galleries, the Robert E. Peterson Gallery is the largest in the museum. The weapons donated to the NRA’s museum represent just a fraction of his vast collection. The Southern Californian represents the quintessential American who served in the U.S. Army Air Corps in World War II and built a publishing empire of 32 monthly periodicals such as Motor Trend, Guns and Ammo, Petersen’s Hunting, Handguns and Rifle Shooter. 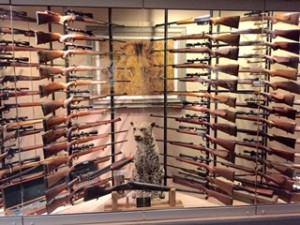 Big Game Hunting Rifles Photo: Ileana Johnson 2015
An avid hunter, Peterson tracked game on every continent. He “was credited with being the first person to ever take a polar bear with a .44 Magnum handgun.” He was Commissioner of Shooting Sports at the XXIII Olympiad in 1984, held in Los Angeles, California.
Peterson’s donated collection includes the Gatlin gun, British guns, personal firearms, Italian Masters, American classics, Colts, German arms, European arms, and a Jewel box. An experimental rifle, a Mauser action Falcon test rifle, formerly owned by Elmer Keith, a Montana cowboy who became famous as a big game hunter, is also part of the collection.
The gunsmiths of Europe created functional arms as well as elaborately decorated firearms for the rich, indicating their social status through special metal and wood inlays, damascening, gold and silver encrustations, engraving and etching, chiseling, goldschmeltz, guilding, silvering, bluing, and browning.
German and Swiss immigrants who settled in Lancaster, Pennsylvania, brought with them a short rifle called the Jaeger (hunter) to use for sport and hunting in the heavy woods that resembled their homelands. It was the same octagon-barreled rifle used by Hawkeye, the hero of James Fenimore Cooper’s The Last of the Mohicans. This rifle was later lengthened to 40 inches and called either the Pennsylvania or Kentucky rifle even though it was manufactured in every colony from around 1700s to right before the Civil War.
Eli Whitney of New Haven, Connecticut, already famous for his invention of the cotton gin, received in 1798 a government contract for 10,000 muskets to supplement those made at national armories. Whitney’s ingenuity turned a rather complex manufacturing process into a series of simple operations, thus revolutionizing manufacturing in America.
Showcased are gun maker and inventor Ethan Allen of Bellington, Massachusetts, Horace Smith and Daniel Wesson (Smith & Wesson) of Massachusetts, who left a large list of arms-design and revolver patents in their long careers, John H. Hall of Portland, Maine, who patented the breechloading rifle in 1811 utilized in rifles and carbines between 1823-1853, and Eliphalet Remington, Jr., who created a handmade flintlock rifle in Ilion, New York. Although Remington the father was not an inventor, he utilized ideas and inventions developed by others and acquired them. His large scale government contract in 1845 of 5,000 Mississippi rifles established the Remington name as the arms-maker in America.
Sharpshooters like Annie Oakley from Ohio, her husband Frank E. Butler, whom she defeated by one point, are famous for accuracy with rifles, pistols, and shotguns. 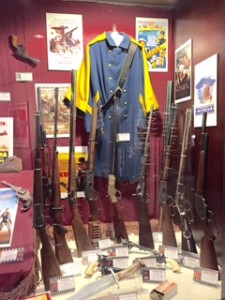 Movie Props Photo: Ileana Johnson 2015
Cinematography brought the American Western to the general public with the Rough Riders departing for Cuba in 1898, Buffalo Bill’s Wild West Show, the Great Train Robbery, Cisco Kid, The Man Who Shot Liberty Valance, Shane, and the Unforgiven.
A larger-than-life bronze statue of Charlton Heston in his beloved Western role of “Will Penny” (1968) pays homage to the National Rifle Association President Heston.
On display are small guns imported during the Civil War from England, Austria, Prussia, Saxony, Bavaria, France, and Belgium. Their quality varied from useless to excellent. A shortage of revolver and carbines was experienced by the Union Army despite Colt, Remington, and Smith & Wesson manufacturing them at record levels.
The displayed ten-barreled .45-70 Colt Gatling gun from the Robert E. Petersen estate was used in John Wayne’s 1967 movie The War Wagon and in the 1976 Clint Eastwood film, The Outlaw Josey Wales. 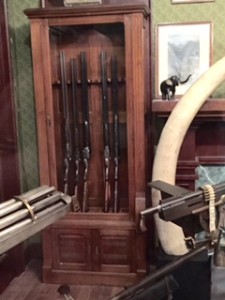 President Roosevelt’s collection Photo: Ileana Johnson 2015
Rifles and other memorabilia are displayed celebrating our 26th President, Theodore Roosevelt, author of 40 books, 150,000 personal letters, thousands of magazine articles, New York assemblyman, rancher, Civil Service Commissioner, President of the NYC Police Commission, Assistant Secretary of the Navy, Colonel of the 1st USV Cavalry, Vice President of the United States of America, recipient of the Medal of Honor and Nobel Peace Prize, father of six children, and an NRA Life Member. He sent the following note to the NRA:
“I am so heartily interested in the success of the National Rifle Association of America and its work done in cooperation with the National Board for the Promotion of Rifle Practice that I take pleasure in sending you herewith my check for $25 for life membership therein.”
According to the Museum Archives, “His firearm collection was perhaps the largest ever assembled by any president of the United States. He was known for insisting upon exacting standards for his guns, and favored Winchesters and Colts. He also treasured a pinfire shotgun that was a gift from his father.”
He inspired the famous Teddy Bear by refusing to shoot a motherless bear cub during a grizzly bear hunt. This gesture became a political symbol for his compassion and for his presidency. President Roosevelt advocated for a balance between conservation and sport even though he embarked on a year-long African safari in 1909. 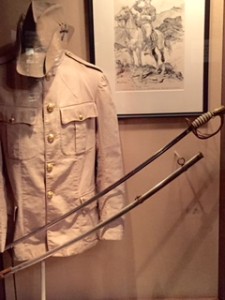 Roosevelt’s tunic, hat, and sabre Photo: Ileana Johnson 2015
His Brooks Brothers khaki canvas tunic, his Stetson hat, and his cavalry officer sword are displayed in a case adjacent to his three valuable rifles and his office/library and other weapons. The National Firearm Museum was selected by the National Park Service to temporarily house Roosevelt priceless artifacts.
The home where they raised six children, Sagamore Hill, built in 1885, has undergone $16 million in renovations since 2011. Roosevelt told his wife Edith, “I wonder if you will ever know how I love Sagamore Hill.” It was the place where Roosevelt died in his sleep at the age of 60.
Four of his six children had distinguished military careers: Brigadier General Theodore Roosevelt Jr. (1887-1944) who perished in Normandy, France on July 12, was an avid hunter who took expeditions in the Himalayas and Nepal with his brother Kermit; Major Kermit Roosevelt (1889-1943) who died at Ft. Richardson, Alaska; 1st Lt. Quentin Roosevelt (1897-1918), an accomplished pilot (his father was the first President to fly in an airplane) who was shot down over the Western front on July 14 and is buried at the American Cemetery at Colleville-sur-Mer, Normandy, next to this brother Ted; and Lt. Colonel Archibald B. Roosevelt (1894-1979) who served in the 1st Division of the U.S. Army during World War I and in the 41st Division in the Pacific during World War II and was severely wounded in both wars.
A memorial to the police officer, Walter Weaver, killed in the 9-11 Al Qaeda terrorist attack in New York includes his photo, pistol, and badges, Shield #2784, Emergency Service Squad 3. 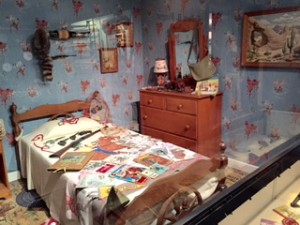 Photo: Ileana Johnson 2015
A typical child’s room display includes toy pistols, pea shooters, cork poppers, and rifles which became popular in the 1850s and remained so until the 1960s. The Daisy air gun was selling 1.5 million a year in 1960.
The confiscated guns and wanted posters of various bank robbers and FBI suspects such as Dillinger and Lester M. Gillis, and posters of ten most wanted fugitives such as Juan Garcia-Abrego and Usama Bin Laden are displayed.
Guns for hunting small game and big game are also exhibited in large cases.
There are numerous cases of Hollywood posters, costumes, and guns used in famous movies that promoted violence, war, and killing. The famous and hypocritical actors who made millions from these movies speak against guns and against the right to bear arms while hiring armed bodyguards for personal protection.
In case you wonder why a museum would dedicate 14 galleries, 85 exhibit cases, and 2,000 guns to glorify the act of war, of aggression, of killing animals for sport or food, consider the fact that firearms have a unique place in American history.
As Charlton Heston said in a speech in September 1997, “There can be no free speech, no freedom of the press, no freedom to protest, no freedom to worship your god, no freedom to speak your mind, no freedom from fear, no freedom for your children and for theirs, for anybody, anywhere, without the Second Amendment freedom to fight for it.”