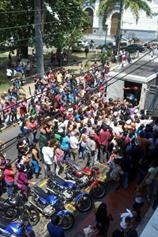 Venezuela Food Line Distribution Photo: Wikipedia
Americans willingly stand in line for hours waiting for a store to open during Black Friday or to purchase tickets to a sought-after football game or concert. They don’t mind freezing in the cold, sleeping in a tent on the side-walk hours and days before the store opens – they want to save $50 for a television set, find a toy that everybody else wants for Christmas, a popular electronic gadget, first issues of geek gear, or tickets to a favorite concert.
What if Americans had to get up early in the morning every day and run around numerous stores in town in order to find food, basic staples, and gas? Ask anybody this question and they will roll their eyes because, in their lifetime they’ve never had to suffer shortages of anything, they only remember abundance in the land of plenty.
Could that ever change? Of course not, most Americans would say. I and my fellow survivors of communism know better because we stood in such lines, I call them the lines of survival. We suffered the indignity of having to do without food, even after standing in lines with thousands of other people, only to find out that the supply ran out, or eating spoiled food that had to be boiled again in order to destroy the bacteria and make it edible.
This is what happens when a previously successful free market society is turned upside down by the socialist ideology utopia — the free market collapses and is replaced by an inadequate and inept government control of the economy which results in serious disruptions to planning, production, and delivery of goods and services. The economy is no longer driven by supply and demand but by the central planning of government socialist bureaucrats who fill their coffers first and ignore the needs of the population at large while making grandiose speeches about how much they are helping the poor.
Most recent case in point is Venezuela. Hugo Chavez destroyed a formerly prosperous nation with his social justice drivel. He brought the Castro-style clinics to Venezuela and destroyed the country’s healthcare. He disrupted the food production and supply. Now that the oil revenues are down due to collapsing oil prices, the country is really suffering. Foreign currency is in short supply, inflation was 64 percent in November, and imports caused shortages of toilet paper, detergent, and car batteries.
According to Andrew Rosati and Noris Soto, the food shortages are so serious that the food distribution was placed under military protection. Thousands of people lined up for blocks, trying to find chicken, toilet paper, and detergent. Price controls imposed by government will guarantee that the lines and shortages will continue. http://www.bloomberg.com/news/2015-01-09/venezuelans-throng-grocery-stores-on-military-protection-order.html
Americans have had their experience with price controls at Valley Forge, Pennsylvania, and it did not end so well. Washington’s army almost starved to death. Farmers sold their produce to the British for gold instead of feeding the continental army for a measly price that did not cover their costs and survival of their families.
Dealing with a serious economic crisis in a socialist manner, the Interior Minister, Carmen Melendez, sent “security forces to food stores and distribution centers to protect shoppers.” While stores after stores show empty shelves and security does not allow photographs, rationing forces citizens to fight over whatever is available for sale, jumping the line and starting fist fights, shoving, and hair pulling incidents. Bloomberg reports that one shopper looked for diapers for 15 days. “People are so desperate they’re sleeping in the lines,” a shopper was quoted.
Because President Nicolas Maduro promised to tweak by decree the government-controlled exchange rate system set at 6.3 bolivars per U.S. dollar, companies fear devaluation and are not sure if they’ll have enough resources to restock inventories or even find inputs needed. Meanwhile the black market is booming with an exchange rate of 187 bolivars per dollar.
The country was in bad economic shape previously due to years of Chavez’s mismanagement of the economy but at least they had good oil revenues which accounted for 95 percent of Venezuela’s exports. With oil prices dropping so low in recent months, revenues from oil exports were cut drastically.