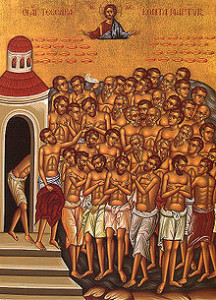 The 40 martyred Saints
Photo: Wikipedia
The celebration of spring in Romania starts on March 9 through April 23. It coincides with the Orthodox tradition honoring the forty martyred Saints (Mucenici) at Lake Sevastia. The forty Saints were Christian soldiers employed by the pagan Roman Emperor Licinius around 320 A.D. The governor of Armenia, Agricola, who found out about their faith, forced them to pray to his pagan gods. Because they refused and did not give up their Christian faith, the forty soldiers were jailed for eight days, stoned, and finally sentenced to death by freezing in Lake Sevastia. During the night, the lake warmed miraculously, the ice melted, and forty crowns of light descended from Heaven above the soldiers. Taken alive from the lake in the morning, the emperor crushed their feet and left them to die. Their remains were burned and their ashes were thrown into the lake. http://www.romaniajournal.ro/march-9-the-romanian-tradition-of-the-40-martyrs/
The folklorist Simion Florea Marian described the legend from Fratautul Vechi, Moldova, which actually mentions forty-four Saints, the exact number of days between March 9 and April 23.
In honor of their sacrifice, the Orthodox Church celebrates the forty Saints with special sermons across the country and the tradition of a special food called “mucenici.” March 9 coincides with the beginning of spring when all rural communities bring the plow out which is repaired by the village blacksmith, cleaned and purified by fire, while the farmers decide when and how they are going to start breaking ground for seeding the soil. Plows are then placed in front of each house, declaring the beginning of the agricultural season open.

“Macinici” as mom prepared them
Photo: Wikipedia
In southern Romania named Muntenia, where I was born and raised, women cook dough dumplings cut into shapes of eight and boiled in syrup with nuts, sugar, and cinnamon. Mom gave away “mucenici” or “macinici” for the souls of the dead while others did it as prayers for an abundant harvest. Women from the regions of Moldova, Dobrogea, and Banat bake “mucenici” pastries in the shape of eight in the oven and serve them with honey and ground nuts. According to Ramona Ciortescu, the regions of Maramures and Crisana do not celebrate “mucenici.” Why the shape of eight? Perhaps it is a reminder of the eight days of jail and a stylized shape of the human form of those forty martyrs who died for their Christian faith. 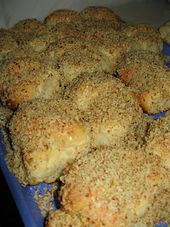 Baked “mucenici” Photo: Wikipedia
Rural secular superstitions intertwine with Christianity, celebrating the end of “old ladies” capricious and cold winter days and welcoming the warmer and fertile spring days of “old men.” Around the country rituals of chasing winter and frigid days away abound — striking the ground with sticks, repeating incantation verses, and a peculiar children’s game of jumping over fires, a symbol of purification. To this day, my Mom has a scar on her right leg with snow-white hair, when she burned herself as a child jumping over such a superstitious fire ritual.
Copyright: Ileana Johnson 2015