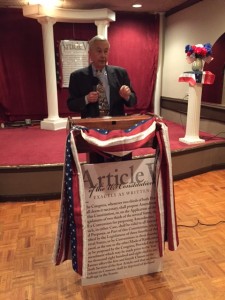 Larry Pratt, Executive Director, GOA
Photo: Ileana Johnson 2015
On May 1, 2015, a well-attended meeting of Virginians listened to arguments against the Article V Convention of States.

Some conservative factions are of the opinion that we have the world’s most perfect Constitution, 17 simple pages, and we don’t need to amend it or replace it in order to address a balanced-budget. Politicians must stop their out of control spending.

“There is nothing wrong with the Constitution,” said the organizer of the event, Sevil Kalayci. She asked pointedly, “If politicians cannot abide by the current Constitution, what makes Americans think that this amendment will make any difference?”

An often stated fear has been that a Constitutional Convention has the potential to become a runaway convention that could replace the current Constitution with a progressive version.

Article V of the Constitution states,

“The Congress, whenever two thirds of both Houses shall deem it necessary, shall propose Amendments to this Constitution, or, on the Application of the Legislatures of two thirds of the several States, shall call a Convention for proposing Amendments, which, in either Case, shall be valid to all Intents and Purposes, as Part of this Constitution, when ratified by the Legislatures of three fourths of the several States, or by Conventions in three fourths thereof, as the one or the other Mode of Ratification may be proposed by Congress;”

Even though the Constitution is very clear on its intent and has been settled for a long time, progressives consider it an outdated document in terrible need of revision. A new book, The Constitution in 2020 by Jack Balkin and Reva Siegel, and a companion website propose the progressive vision of the U.S. Constitution in regards to individual rights, citizenship, southern border, “personhood,” and the bizarre questions, “Who counts as an American?” and “What kind of law counts as American?” http://constitution2020.org

Progressives opine that the U.S. Constitution must be revised to agree with their political, cultural, and ideological thought, except in cases where the exact wording of the Constitution suits their agenda and intent. They would love to replace “freedom of religion” with “freedom of worship” because worshipping would then only be allowed in a church and nowhere else. “Individual rights” must include “social justice,” “economic justice,” “gender justice,” and “environmental justice,” the hallmarks of global communism.

The keynote speaker was Larry Pratt, Executive Director of Gun Owners of America, a non-profit lobbying organization formed in 1975 “to preserve and defend the Second Amendment rights of gun owners. GOA sees firearms ownership as a freedom issue.” GOA currently has over 300,000 activists who support the right to bear arms as described in the Second Amendment. “A well-regulated Militia, being necessary to the security of a free State, the right of the people to keep and bear Arms, shall not be infringed.” https://gunowners.org/

The first convention actually was a runaway convention but the participating men then were men of honor and the convention turned out well for the American people. Today, it is a different story, “people are playing with fire.” The delegates are already in power and are uncontrollable even in the face of re-election and have not kept their promises to represent the fiscal conservatives who have put them in power.

Time and time again, elected representatives have voted against the wishes of their constituents, continuing the out of control spending that has doubled our national debt in the last seven years. “We have no political control over the ruling class,” said Pratt. Look at the recent actions and votes of the Republican Party that support the Democrat Party’s agenda against the wishes of Americans who put them in power specifically to fight the destructive and anti-American Democrat agenda.

One of the monumental disappointments was the fact that the Republican majority in Congress was easily “cowed” and it failed miserably to stop Obamacare. “They are afraid of their shadow,” Pratt said. They had a chance to stop Obamacare. ”As long as the Republicans tolerate Speaker Boehner and leader McConnell, they are lying to us,” continued Pratt. “We are at a very critical point in our national affairs,” as if we are having a grand time on the Titanic, dancing and drunk, oblivious to the inevitable sinking.

Doctors were bought off; they are going right along with Castro Care, knowing how bad socialized medicine is, and agreeing to ask patients about their guns, a massive invasion of our privacy, a massive computer gathering data, using taking a mild pill against depression as a reason to confiscate guns from owners like they are doing in New York State.

Can politicians and bureaucrats be trusted that they are going to do the right thing in any instance, including a Constitutional Convention? Take for instance the case of ATF agents who were seen going into gun shops and illegally wheeling-in photo copiers and demanding records of anyone’s gun sales just in case some may have escaped the roving eye and ears of the NSA, said Pratt.

Why are prominent conservatives, with whom many agree on a variety of issues except the Constitutional Convention, support the Article V Con-Con? Pratt explained that perhaps they “have misjudged how the political system really works,” trust politicians to do the right thing, and want a balanced budget.

On the question of Jade Helm 15, Larry Pratt answered that it is an “Unconstitutional exercises of federal police power and it is menacing enough.” Gov. Abbott of Texas, who “stands tall,” told the feds, Pratt added, he was going to keep an eye on them and so is his National Guard.

A rhetorical question begs asking, is the progressive Leviathan at bay or on defense? That remains to be seen, concluded Pratt.

One thought on “An Evening in Support of Our Constitution”