I was digging furiously through my book shelves, looking for one special volume which I had brought with me from Romania when I immigrated to the United States. After half an hour I found my May 1977 first edition of Romulus Rusan’s book, “Greyhound’s America,” published in Romanian during the brutal communist regime of Nicolae Ceausescu.
I never understood how such a book that told the truth about life in the west escaped his publishing censoring goons. I was going to finally find out as I was going to meet Romulus Rusan and his equally famous and lovely wife, the poet Ana Blandiana.
Romulus Rusan told me that his editor revealed to him that, of the 100,000 plus copies of his first edition book that were sold in Ceausescu’s Romania, probably half of the readers immigrated to the U.S. He could not understand why Rusan was not arrested by the communist regime. His wife joked that they must have labored under a lucky star, under divine protection. 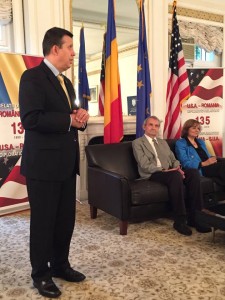 Romanian Ambassador in Washington, Ana Blandiana and Romulus Rusan
(Photo: Ileana Johnson, June 3, 2015)
I met Ana Blandiana and Romulus Rusan at a Romanian Embassy serata honoring their literary work and their untiring efforts to bring to light the horrors of communism in the First Memorial to the Victims of Communism at Sighet, Romania. A true labor of love, their work began in 1993 with the acquisition of the Sighet Prison, a condemned ruin.
The former prison built in 1897 to incarcerate common criminals, was used during First and Second World Wars for political inmates, priests, Polish revolutionaries, and Romanian deserters. During the period of 1948 to 1950, resistance fighters from Maramures, peasants and students, were imprisoned here.
Between May 1950 and July 1955, it served as a maximum-security facility, holding ministers, members of Parliament, journalists, officers, priests, and other religious leaders. During this time, 54 of those held died while in custody and were buried in unmarked graves. In 1955 the prison became again a jail for common criminals with more creature “comforts.” Because of a decree in 1975 which ruled that prison sentences had to be served in the workplace, the prison was closed and abandoned.
Ana Blandiana and Romulus Rusan petitioned the Council of Europe to open a museum in the former prison which had become, as they described it, an “insalubrious ruin.”

Sighet Museum Entrance (Photo: Wikipedia)
With funds from the Civic Academy Foundation, the International Centre for Studies of Communism, and the untiring efforts of Ana Blandiana and Romulus Rusan, the former prison became the first museum of its kind in the world, dedicated to the victims of communism in Romania and in all former communist countries of the Iron Curtain.
Each cell became a separately-themed room with its own chronology of death and destruction of the human body and spirit caused by the most oppressive form of dictatorship in history – communism.
After the Civic Academy Foundation was established to create the museum at Sighet, the 175 founding members chose Ana Blandiana to be President.
The exterior of the building was repaired with help from Hanns Seidel Foundation and from private donations. The actual repair work commenced on July 1, 1996 and the Memorial was inaugurated on June 20, 1997.
Former political prisoners, Orthodox priest Constantin Voiculescu and Graeco-Catholic priest Eugen Popa, held the religious service to consecrate the Space for Recollection and Prayer.
I was amazed that a husband and wife team was able to bring to life such a significant memorial with limited resources and a gargantuan effort, yet the west is still struggling to raise funds to build a similar museum.
In addition to the Civic Academy which is attended by students and professors from Europe, the International Center for Studies into Communism, the Memorial to the Victims of Communism and to the Resistance, the Sighet Museum has been visited to date by more than one million people. 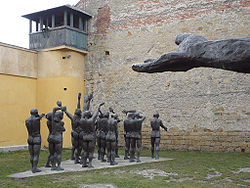 The Cortege of the Sacrificial Victims by Aurel I. Vlad (Photo: Wikipedia)
The symbolic statuary entitled “The Cortege of the Sacrificial Victims” by Aurel Vlad depicts humans walking in various stances of resignation, heads bowed down or raised to the sky, some with hands up, begging, imploring, appealing to a higher power, and wondering why. When it rains, the rivulets make the statues appear as if the victims are crying.
Dozens and dozens of rooms in the museum tell the horrible stories of the most oppressive period in Romania’s modern history:
– More than 10,000 trials were held according to the Communist Party template – accusations of ‘treason,’ ‘plotting against the social order,’ ‘espionage,’ ‘sabotage,’ ‘diversion,’ ‘inimical attitude,’ ‘public instigation,’ ‘fraudulent crossing of the border,’ ‘omitting to make a denunciation,’ and ‘dissemination of forbidden publications;’ they were always followed by hard prison time and sometimes death.
– More than 2 million people were persecuted politically using “coercive methods,” with hundreds of thousands arrested administratively, without trial, some up to ten years.
– 600,000 Romanians were arrested and sentenced to prison between 1945-1989
– 200,000 Romanians were deported to forced labor camps.
– Destruction of traditional parties, National Peasant Party, National Liberal and Social Democrat Party, and installation of one party, the Communist Party, replacing a multi-party democratic regime with a one-party state.
– Repression against the Romanian Orthodox Church, Graeco-Catholic Church, Protestant and Evangelical churches.
– Installation of the dreaded Securitate by decree in August 1948, following the infiltration by communists of the Ministry of Internal Affairs in 1944.
– Use of political detainees in hard labor camps for various building projects.
– How individual farmers were forced into collectivization, the peasants’ resistance, and their swift repressions.
– The sovietization of the population, forced submission into communism by purging, beatings, and confiscation of personal property.
– Orchestrated by communist organizers like Emil Bodnaras, Ana Pauker, and other Moscow agents, the army, the police, and the justice system were forcefully transformed into communist arms of the police-state.
– Firing and assignment to manual jobs or labor camps of any teachers opposed to the communist regime; those remaining and the new teachers had to become the “new man” through violent ideological and propaganda subjects, becoming tools of the Marxist-Leninist education based on Soviet-style textbooks.
– Ethnic repression, accusations of “Zionism” and the maltreatment of gypsies.
– Deportation of 44,000 people to the Baragan steppe; 1,700 of the deportees died; the oldest person was deported at the age of 95 and lasted until he turned 100.
– Anti-communist resistance in the Fagaras Mountains and Western Carpathians.
– Women who gave birth in prison and their children were removed and sent to orphanages; 4,200 women, mothers, wives, or daughters of political prisoners were also imprisoned as “dangers to the social order.”
– The famous historian Gheorghe I. Bratianu was imprisoned at Sighet for twenty-four months and died there in April 1953; on August 6, 1953, the Interior Ministry decided to increase the prison sentence of a dead man by 60 months.
– High school students were deported and served time in communist prisons for either running into the mountains to join the partisans or defacing/tearing up official posters and portraits, telling jokes, writing epigrams, and drawing cartoons.
– Doctors and medical students were imprisoned for refusing to adopt communist jargon and for not rejecting “all that was western.”
– Room 9 is the cell where the famous Iuliu Maniu died in 1953 (1873-1953); his cell was left untouched, with thick bars and the broken bed with wires sticking out from the dirty mattress; Maniu, the architect of the unification of Transylvania with Romania in 1918, the former Romanian Prime Minister, leader of the National Peasant Party and of the National Romanian Party, former Parliament member in Bucharest and Budapest, attorney for the Graeco-Catholic Church, landowner and leader of the Democratic opposition, a man who dedicated his entire life to public service, died alone in his frigid cell, without a candle or the presence of another human being.
– Those who died in prison at Sighet from 1952 on were buried secretly at night on the banks of the River Tisa at the border with the former USSR. (Romulus Rusan, Museum Archives and Guide, 1993-2014)
Horrible details about the prison life had emerged slowly from those who survived, from guards, and from those forced to clean and sweep the hallways and the prison courtyard. They would sometimes exchange a few words with political prisoners who were stronger and able to stand up and speak. Those who became very ill were usually isolated and deprived of medical treatment until it was too late to assimilate extra food such as potatoes, and they expired. 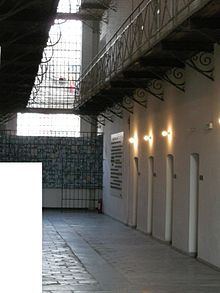 Sighet Cell (Photo: Wikipedia)
The food in prison was not enough to ensure survival. The communist guards hoped that the inmates would die quickly of malnutrition and starvation. Cardinal Iuliu Hossu of the Cluj Graeco-Catholic Church wrote in his memoirs that the “soup was water with a piece of vegetable floating in it.” It was considered a delicacy to find a “hard piece of a cow’s hairy lip” bobbing in this watery soup. http://www.romanialibera.ro/aldine/history/cum-a-murit-iuliu-maniu-la-sighet-215636
The inmates received no medical assistance. Knowing that dying men and women were unable to metabolize the extra calories, the guards would give them extra food. And if the lack of proper nutrition and medical care did not kill the political prisoners, the bitter cold of northern Romania exacerbated by the thick walls most certainly caused hypothermia and death.
The Sighet Museum is a living monument to the cruelty of communism and to the inhumane treatment that millions of innocent citizens were subjected to by tyrants and their failed ideology, an ideology concocted by a dangerous man named Karl Marx whose theories ultimately destroyed the human spirit, imprisoned free men, and killed over 100 million worldwide in the name of collectivism, equality, and social justice. http://www.memorialsighet.ro/index.php?lang=en