“Today it is the unborn child; tomorrow it is likely to be the elderly or those who are incurably ill. Who knows but that a little later it may be anyone who has political or moral views that do not fit into the distorted new order?” – Attributed to Dr. Mildred Jefferson 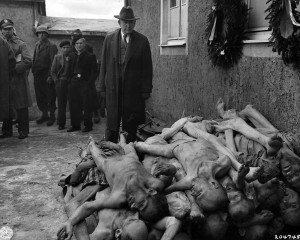 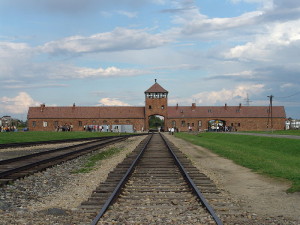 Auschwitz today
Photo: Wikipedia
The camp survivor of both Auschwitz and Bergen-Belsen, Anita, testified at the trial, the biggest murder trial in human history. Anita was shocked that lawyers would defend these criminals. “Are they crazy? You see the crime, you see the crime,” she repeated.
In the fall of 1945, the first on trial was Commandant Kramer and his staff at Bergen-Belsen, shown on British Liberation footage; he was sentenced to death. When the prosecutors realized they had a powerful source of evidence, many Nazi criminals were found guilty of war crimes and sentenced based on Bernstein’s documentary reels and testimony from the people they abused and tortured. By November 1945 the International Military Tribunal began the trial in Nuremberg which also used film footage as evidence against the defendants.
Even though Bernstein’s 1945 film had been quietly dropped from production, an Imperial War Museum team completed the film seventy years later, using the original evidence, cameramen’s notes, cross cuts, and script, “to complete Bernstein and Hitchcock’s intended final section.”
Scrolling through the horrible pictures frozen in time of some of the enslaved, tortured, starved, killed, and burned by German fascists, the movie ends with a powerful message. “Unless the world learns the lesson these pictures teach, night will fall. But by God’s grace, we who live will learn.” https://www.youtube.com/watch?v=TPukz3rttrk