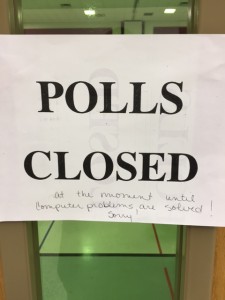 Photo: Ileana Johnson 11-3-15
Leasylvania Elementary School Precinct, Prince William county
Voters who showed up at 6 a.m. on November 3, 2015 to vote in Prince William County, northern Virginia, were greeted at the Leesylvania Elementary School Precinct by a closed door with the sign, “Polls Closed, (sic) at the moment until computer problems are solved! Sorry!”
When they asked for paper ballots, voters were told that they would not be available as it was impossible to verify online if the people were actually registered to vote.
A certain number of the would-be voters left for work, but a few decided to wait. Most were not sure if they would be able to return before the 7 p.m. poll closing time since they worked in the district and the commute is absolutely atrocious on any day but especially on Tuesdays. I decided to go back around 1 p.m. to try and vote again. This time, the polls were open. I asked the precinct captain what happened.
“We had connection issues, we could not get our computers up and running. That affected one third of the precincts in the county. It wasn’t just us. We couldn’t open or allow people to vote until we had the issue solved.”
What kind of connection problem you experienced, I asked.
“The computers would not talk to each other within the whole county. Because when someone signs in, the county is aware of it. Without that, we could not ask people to vote.” He continued, “at the time, we did not know it was a county-wide issue, but we found out later on.”
He went outside and told the crowd, “Folks we are having connection issues, we are working on the problem as fast as we can and as soon as we can solve it, we would let you know. About 15 people left. I could not turn anybody away, they just left; they had to go to work. Some people stayed, most of them left. We could not tell how long it would last because we did not know. We got up and running at 6:30 a.m. and we’ve been up and running ever since.”
When asked if the voting polls would close 30 minutes later to make up for the shortage of time, the precinct captain answered that he did not know.
I showed my I.D., stated my full name and address, and voted by filling in blocks with a pen by candidates’ name on a paper ballot. I was then directed to feed the double-sided sheet myself into a scanner and an attendant let me know from the other side of the machine when my vote was electronically cast. I was a bit puzzled that the scanner could read both sides of the sheet at the same time. And this is how we voted or not in northern Virginia in a predominantly Democrat county.