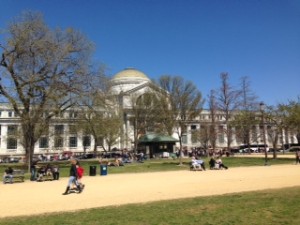 The National Fossil Hall at the Smithsonian National Museum of Natural History will receive its “first nearly-complete” T. Rex specimen on April 15, 2014 during a live webcast ceremony. The Fossil Hall will close its doors on April 28, 2014 to undergo “the largest and most complex renovation” which will last five years. When the National Fossil Hall reopens in 2019, the dinosaur will become the centerpiece of the newly renovated museum. http://naturalhistory.si.edu/fossil-hall/

The museum will display an “unrivaled” fossil collection but will also explore how “The distant past affects all of us today and will continue to do so in the future. How will climate change impact the natural world and our daily lives? How can we make informed choices about our ecosystems as individuals and as a species? How can we all become informed citizens of a changing planet?”

Everybody loves the Smithsonian! On any given day, the most popular exhibit, the Fossil Hall, is teeming with adults and impressionable children of all ages from around the country who are eager to learn, see, touch, and experience what the world was like when the dinosaurs roamed the Earth. There is a fascination with large mammals that every child has experienced growing up. What better place to add a heavy dose of environmental activism?

New signs have appeared in the museum, signs I had not seen during previous visits. For example, a board with very large letters, CLIMATE CHANGE, informed visitors about what scientists forecasted:

“During the 20th century, Earth had a relatively stable climate. Today, we know this is unusual and that climatic variation is normal. (Museum emphasis) Deep sea and lake sediments, along with ice cores reveal cycles of climate change that shifted grassland and forest boundaries, created and melted glaciers, and stimulated human migrations and retreats over millions of years.”

“The hall opened over 30 years ago. To keep the information fresh, we’ve added a series of signs throughout to show how geological processes and climate change are directly linked to changes in our ecosystem.” Does keeping the ‘information fresh’ mean adjusting scientific facts to fit the consensus political ideology of those who believe in anthropogenic global warming?

The Hall of Paleontology explains that “For over 4.6 billion years, the Earth has cycled through periods of ecosystem birth and death, species formation and extinction.”

If I was a curious student, I would be confused when another panel explains, “Following the historical pattern, after ten thousand years of interglacial warmth, we should be due for the onset of a new glacial epoch. However, unlike previous Ice Age cycles of warm and cold periods, human population growth and industry have disrupted the fluctuation of cycles. (Museum emphasis) Rising levels of CO2 are pushing Earth toward alarming levels of warming, resource depletion, and biological extinction.”

What is a student to think after reading this? Humans are guilty of global warming. “As glaciers retreat, sea levels rise, and Arctic ice disappear at a dangerous rate, we need to ask ourselves how we can be better stewards. It’s OUR planet.” (Museum emphasis)

Does the average student know that the level of Antarctic ice has increased last year? Would they know that the exploratory ship from Australia was ice bound for 13 miles and a rescue had to be mounted from different countries, at great expense of fossil fuels and time to save the global warming professors and scientists on board who were there to document and measure the melting of the Antarctic Ice? Has science definitively measured significant sea level rise?

If I were a student, I would be confused because I would not know what a planet steward is, how I could take care of the planet by myself, I would feel overwhelmed, and then I would wonder who decides what normal is and why are there conflicting messages – one panel in the museum says that climatic variation is normal and another that we are causing global warming.

The Earth can go through a cycle when the orbit is more oval than circular – this can last 100,000 years. The Earth can wobble when it spins – this cycle can be 21,000 years long. The Earth’s axis can tilt – this cycle can last 41,000 years. “When some parts of these cycles are combined and occur at the same time, they are responsible for major changes to the Earth’s climate… including ice ages.”

If I was an impressionable child and most of them are, I wouldn’t know that science uses modeling to make predictions about the future and these models can be flawed or represent just one point of view, the view of the “consensus” scientists of the Intergovernmental Panel on Climate Change (IPCC) ideologues.

I would leave the museum with the following words seared in my brain. “We may be facing decades and perhaps even centuries of higher temperatures than humanity has ever seen… due to an enhanced greenhouse effect.”

The museum also tells visitors that carbon dioxide affects climate change, that during the “past 1,000 years, increases in atmospheric carbon dioxide from human burning of fossil fuels have caused the Earth’s temperatures to rise faster than would happen naturally during an interglacial period.” As a curious student, I would ask, who decides the “naturally” parameters of temperature change?

“Are we still in an Ice Age,” asks another display. The answer is very confusing. “Yes, but… right now we are in a warming period within an ice age.” The current ice age is called Pleistocene and its temperatures fluctuate between cooler periods called “glacials” and warmer periods called “interglacials.” I wonder how many factories and humans were burning fossil fuels in this Pleistocene ice age that began 2.59 million years ago?

Another display tells students that “The glaciers in Montana’s Glacier National Park may be gone by 2030,” that’s a mere 15 years from now. They must run home and tell their parents and siblings that the Arctic ice is melting so fast that by “2040 or earlier, the Arctic Ocean may become entirely ice-free in summer. The polar bears are already affected by sea-ice loss, they are going to drown and starve. The students don’t know that polar bears are good swimmers, they play on ice floes, and have increased in numbers five-fold.

“Have you noticed an increase in storms and other extreme conditions near your hometown?” Students are not savvy enough to tell the difference between a severe weather event and climate, they see them as one and the same.

Scared out of their minds, the students leave the museum with the following advice to bring home, hopefully influencing their families to take action and read the Ocean Portal website:
– Support renewable energy such as wind or solar (students don’t know how many billions have been wasted on 34 bankrupt solar enterprises, how expensive solar energy is , that it needs fossil fuel energy backup, and the damaging health effects on humans and birds)
– Use energy-efficient light bulbs and appliances (students don’t know how toxic the CFL mercury laden bulbs are when they break)
– Walk, bike, or take public transportation (not feasible or cost effective in many places)

It seems that the main stream media and pro-environmental organizations embellish the damage caused by climate change via “information manipulation and climate agreements.” http://ajae.oxfordjournals.org/content/early/2014/02/24/ajae.aau001.abstract

“You won’t find it shocking to learn that suppressing inconvenient facts, lying about climate science and exaggerating tales about natural weather are deliberate strategies for global warming campaigners.” http://www.cfact.org/2014/04/04/peer-reviewed-paper-its-ok-to-lie-about-climate/

Yet every week, the Washington Post is running stories and entire sections dedicated to the perils of climate change. Faced with unusual and sustained cold temperatures, increased ice surface, the global warming alarmists repackaged their Gaia-worship as climate change.

A day at the museum for young and impressionable minds can be a frightening/brainwashing experience/lesson in global warming/climate change advocacy. It is easy to see how most young visitors would become life-long stewards/slaves to the religion of Mother Earth. And if the points were not driven home clearly enough that humans are destroying the planet with their mere existence and technology, visitors were urged to make a choice right now because “doing nothing is a choice.” After all the gloom and doom presented, “It’s not too late to avoid disaster, but we are running out of time.”