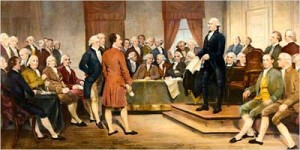 One of my readers sadly remarked that this is no longer America that she grew up in. And the change that occurred at a dizzying pace happened relatively overnight. It was not a gradual transformation born by normal change over time; it was a fundamental forced transformation from a constitutional republic to a rule by a corporatist and international banking oligarchy that pulls the strings of the former branches of government, executive, legislative, and judicial.


A soft coup has occurred that had been planned for years, unbeknownst to most Americans who are still busy thinking that, if they just elect the right candidate this time and energize the vote in one more election, things will turn around and the rule of law will be restored. They are not taking into account the millions of illegal aliens who are registered to vote, the deceased vote, and those who are bussed from Guatemala, Honduras, and El Salvador and dropped off in Arizona, including young children to be housed on military bases at considerable cost per child to the U.S. taxpayers. These children will be reunited eventually with their families here, doubling, tripling, and quadrupling any estimates of the illegal vote. The newly amnestied Dreamers have already cast their votes in the last presidential election and helped re-elect our President.

The MSM across the board has morphed into the cheering promoters and excusers of the regime, the de facto propaganda arm of this fast change to a soft tyranny. Few Americans have noticed the not-so-subtle rhetorical changes. One recent example is the capitalist phrase “middle class” has become the communist “working class.”

The rule of law has been replaced in “this year of action” by executive orders and regulations issued directly by various bureaucratic “public servants” and agencies directly answering to no one who have become, in essence rulers by fiat. Most recently, student debt was called upon to be relieved by “millionaires” who must now expiate their sins of being entrepreneurial, hard-working investors and job creators by paying for those who got worthless degrees with which they cannot find employment in the job-destroying Obama economy.

The government has bailed out everything from car companies, banks, student loans, and mortgage companies. The feds have replaced our education system with Bill Gates’ vision of academia funded by his own millions and the government’s Race to the Top billions – a never before tested and bizarre curriculum called Common Core. The complicit teachers and administrators followed the money and the directives like drones guided by a remote.

Marching more and more into the nanny state, parents are losing the right to their children (either to local schools, child protective services, foster care, or hospitals), sugary drinks and other non-government approved foods are banned, minimum wage is pushed to $15 an hour, even though it will hurt employment, China is taking over our food production, manufacturing, and farming. Pharmaceuticals are already controlled by a few manufacturers and some drugs are harder to find, in short supply, or no longer produced. Vitamins and over-the-counter drugs are more strictly controlled, particularly in Europe.

Medical care is becoming a more expensive service for most Americans thanks to Obamacare that was supposed to insure 15 percent of uninsured Americans yet in the end, it has uninsured millions by pushing them out of the market. American families who were previously insured can no longer afford the high premiums and deductibles associated with the Obamacare exchanges. Many doctors have retired or have stopped accepting Medicare and Medicaid altogether due to the hassle, mandatory electronic record compliance, and low government reimbursement rates. The IRS has become the insurance enforcer and punisher of insurance non-compliance.

Where we live, where we build, and how densely populated we are allowed to live, has been taken over by the Regionalism and Sustainability plans of UN Agenda 21 via draconian, property rights infringing zoning regulations. Everything we do in life must be “green and sustainable” thanks to the environmentalist Gaia-centered agenda.

Global warming/climate change now drive every political decision made at every level of government, fleecing citizens worldwide of unnecessary billions and trillions in carbon taxes, much higher utility rates, expensive gasoline prices, and any other type of fossil fuel-generated energy.

Fossil fuels have become dirty words in the progressives’ war against coal, a war bankrupting as many companies as possible that do not or cannot afford to comply with strict EPA emissions or with expensive and inadequate power generation by renewables.

Smart meters and smart appliances are now forced on the entire globe, sold under the guise of a smarter, more efficient grid. It is so smart that it is a sitting duck to any cyber-attack, solar flare, or a simple physical attack on substations. All smart appliances and electronic gadgets have become spying devices without a warrant, providing every detail of our intimate lives to the NSA.

We can now be killed and imprisoned indefinitely without due process. NASA has turned into a feel-good agency for the Muslims. Drones are flying around the country spying on innocent citizens who have done nothing wrong. NSA is recording everything.

Illegals are bussed in to overwhelm the southern states, our economy, the health care system, and the educational system, with the intent of changing our national demographics because the oligarchs have decided that we are not diverse enough, they need cheap labor, and more low information or no information Democrat voters.

Under the guise of an impending “humanitarian disaster,” which, according to the press in Honduras, was created by our own government who promised under-age illegal aliens no deportation and immediate amnesty, children between the ages of 5-18 are bussed and flown across Mexico from Central America to be housed temporarily in Arizona, Oklahoma, and Texas. Reports streaming out of these holding facilities claim that serious infectious diseases and sexual activity are rampant. These countries are poor and economically strapped but these children are not Castro’s Peter Pan children.

One astute caller asked why these minors are not sent back to be reunited with their families in their home countries instead of allowing them to create such chaos in our country that is already reeling from crisis after crisis. He mentioned the “Elian Gonzalez Doctrine.” Elian survived the defection attempt from Castro’s Cuba but his mother drowned at sea. After weeks of round the clock media circus, Attorney General Janet Reno used the force of law and armed men to snatch this frightened boy from the safety of his aunt’s house and returned him to his father in Cuba. Elian became an instant propaganda tool for Fidel Castro.

For a long time the goal of immigration was assimilation into the American culture, learning English, becoming a contributor to our way of life and enriching the diverse fabric of our society while retaining the American exceptionalism.

Now liberals have devised the “path to citizenship,” immigration forgiveness for breaking our laws, a clever system of bringing the supposedly scared and frightened people, who broke our laws and live around us in plain sight, “out of the shadows.” They called them “undocumented workers,” “undocumented Americans,” “paperless immigrants,” and many other deceptive euphemisms.

Liberals are forcing us to accept these illegals as equal citizens with the same rights and benefits but not the same responsibilities we have as American citizens. In the meantime, more than 4 million legal immigrants are awaiting the resolution of their cases to come to the U.S. I often wondered why illegal aliens are risking life and limb to come here if the freedom and the opportunity to succeed are long gone. The answer is simple – they are so poor, they come for the generous welfare because such programs do not exist in their countries and we, the taxpayers, are overly generous to a fault. Can we and should we work to support all the poor of the world? Do we not become slaves to foreign nationals when we spend so much of our time on earth earning a living and then giving it away in taxes and welfare? To make matters worse, these people do not want to assimilate.

Our returning vets are treated as social trash and stripped of the right to get decent medical care. Illegal aliens receive first class free health treatment in our best hospitals around the country but vets must use the VA substandard facilities where waiting lists and waiting list for the waiting lists are condemning many to unnecessary death when they should receive the best treatment in any hospital in the country. I met a vet who served in Afghanistan in 2006. During his tour, he injured his shoulder. He lived in pain and with limited mobility for 7 years before he was referred to an orthopedic specialist and received shots and physical therapy.

Illegal aliens are flooding the country at an alarming rate and the regime is encouraging it by not enforcing the law. We no longer have a border per se, we have lost our sovereignty to the one-world globalists who have no allegiance to the country they were born in, they are men and women without a country and with a dark heart ruled by money, power, control, and corruption.

The people of my generation believed in “the best of times are yet to come” because the values of the depression era generation were still vibrating in the background of our country. The values of today are worrisome, perplexing, and frustrating. Our grandchildren don’t know history, government, and economics. They bury their heads in the proverbial sand called reality television and social media as the politicians and their constituents are burying their own children and grandchildren in insurmountable debt.

Faith and churches have been taken over by communists and sympathizers of the “religion of peace” which makes no secret of its plan to install a world caliphate, a theocracy that would destroy any dissenting non-believer who still does not understand that Islam is not a religion; it is a political system incompatible with our Constitution. Liberals are very busy appeasing them, inviting them into our midst, and making room for any demand in the name of tolerance and the utopian right to Coexist.

The destructive work of liberals cannot be complete without the final push for an Article V Convention to rewrite the outdated and foggy Constitution written by “evil” men of “white privilege.”

Tyranny is tyranny, whether it is soft, socialist, communist, fascistic, or theocratic. Just when it seems that all is lost, the Majority Leader of the House of Representatives, Eric Cantor, is sent packing by real Virginians who are tired of Cantor’s doubling down on amnesty, and the Tea Party candidate, David Brat, wins the primary.

One thought on “How Long Before the Founding Fathers’ America Disappears?”