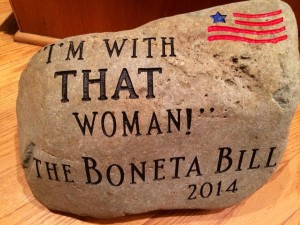 While we are fighting in Virginia and around the country for small farmer’s rights to maintain their freedom to farm, unencumbered by local government permits and environmental NGOs that are determined to force all farmers under conservation easements and regulatory control, war refugees are given land and grants to farm in our country.

A recent report by the Associated Press from Des Moines, Iowa, stated, “The rapidly rising demand for locally grown fruits and vegetables has created a robust new market for refugees who fled violence in their home countries and found peace in farming small plots of land in several U.S. cities.”

The Global Greens program offered through the Lutheran Services of Iowa enabled 26 refugee families from Bhutan, Burundi, Burma, and Rwanda to grow tomatoes, potatoes, carrots, kale, lettuce and eggplants for their own consumption on small plots of 50 feet by 50 feet. Eight families are growing food on quarter-acre plots for local commercial consumption.

Simon, a refugee from Burundi said, “We were in a refugee camp and life was not good there but the United States gave us the opportunity to come here. This means a lot to me because we get to sell stuff and make a little bit of money so we can help our family and we can grow food so our family can feed other people and feed ourselves too.” He expressed his hope to return to Africa one day and “to teach them new techniques to grow food and fight hunger.”

The goal of the Global Greens program is “to help families make money, but it’s also about being able to grow some of their own cultural crops. It’s being able to involve their families, being able to just have their own land.” http://bigstory.ap.org/article/dc77e20b44534de5b9b029f968cb21c4/refugees-settle-thanks-small-farm-plots

Should these government grants and charity not be given to our own unemployed and destitute American population who would welcome the opportunity to have their own piece of land on which to farm commercially and grow their own food? Charity begins at home but lately it seems that our own population does not count; illegal aliens and refugees from war and poverty-torn areas are given priority over the wellbeing, financial security, and health security of our own citizens.

Additionally, has any American citizen tried recently to get a “Farmers Home Loan?” What about two years of free living like the State Department gives to refugees?

Environmentalists in the historic York County, Virginia having collected 130 signatures, have asked the Board of Supervisors to ban commercial farming. Anthony Bavuso, a local oysterman, did not believe that York County should require him to purchase a special use permit for his oyster-farming operation at York Point because the Commonwealth of Virginia passed a low in 2014, the Boneta Bill, to protect small farming.

This law is strongly opposed by conservationist activists and environmental NGOs and they are determined to obstruct it by “asserting that the county of 66,000 could cite lot sizes and other considerations to quash farming activities.” www.watchdog.org/170548/county-farming-ban/

Martha Boneta, the small farmer who owns Liberty Farm in Paris, Virginia, has been battling for eight years the Piedmont Environmental Council (PEC), a 501(c) non-profit land trust that co-holds an easement on her family farm with the Virginia Outdoors Foundation (VOF). Her easement contract permits agricultural, industrial, commercial, and residential uses of her property. Yet PEC regularly inspects, to the point of harassment, her barn, tools, kitchen, bathroom, and closets to make sure that nobody resides in her barn. According to Boneta, based on the secretive “confidential agreement” between the NGO and realtors, there is no doubt about the intent of the constant harassment and unending court battles.

While American farmers who have farmed for generation on small plots are being squeezed out by the NGO environmentalist assault on property rights, refugees and illegal aliens are given land and money to achieve the American dream. It is nice to be charitable and altruistic but our American citizens and their children’s dreams should have priority.

One thought on “Charity Begins at Home with American Citizens”