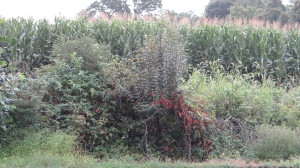 Photo: Ileana Johnson 2014
The United Nations Framework Convention on Climate Change met in Lima, Peru, December 1-12, 2014, determined to chisel a new treaty that would mandate a cap and trade on greenhouse gas emissions effective by 2020 and would “eliminate the use of fossil fuels entirely by 2050.”
The hypothesis that rich nations caused climate change by burning fossil fuels to produce energy has never been proven by IPCC’s computer modeling. The fact that now the hypothesis changed its name from global warming to climate change in the face of obvious 18 years of global cooling is enough evidence that the purveyors of the industry of climate change are desperate but are not giving up. Fleecing rich countries with carbon taxes is a very lucrative scam.
“We must leave fossil fuels in the ground and not repeat the steps of the developed countries that brought us to this point,” said Enrique Maurtua Konstantinidis, international policy advisor for Climate Action Network Latin America.
The Climate Action Network, “a conglomerate of 900 radical green groups from about 100 nations, mocked Australia, Belgium, Ireland, and Austria because they have yet to donate to a new Green Climate Fund.” The real agenda of spreading the wealth from developed countries to poor countries and arresting economic development could not be more transparent. http://pjmedia.com/tatler/2014/12/02/exclusive-new-legally-binding-treaty-emerges-on-first-day-of-lima-climate-conference/
Martin Kaiser of Greenpeace stated that, “In Lima, the countries must agree on the long-term goal of phasing out fossil fuel emissions to zero by mid-century while moving towards 100 percent renewable energy for all in a fair transition period. Subsidies for fossil fuel industries must be shifted towards renewable energy deployment and climate adaptation for vulnerable countries. In countries like the U.S., China, and the EU, the phase-out of coal must be accelerated.”
So how are renewable energy industries working out so far across the globe as replacements for fossil fuels? Judging by the number of bankruptcies filed and by the billions in taxpayer dollars wasted so far, with scant energy produced, not very well.
Take Ivanpah Solar Power Facility (ISPF), which cost $2.2 billion to build ($1.6 billion from government loan guarantees and $600 million from private investors, including one third from Google), “was supposed to deliver an energy output of approximately 1.7 million MWh (megawatt-hours) of electricity annually.”
According to Dr. Klaus Kaiser, the Ivanpah facility, which covers 4,000 acres and is located in the Mojave Desert, delivered a very low output of 250,000 MWh during January-August, 2014. The visionaries of solar power did not take into account the blasting of mirrors by sand and dust. To solve the problem, ISPF investors decided to seek extensions on the borrowed money and to use more natural gas, “doubling the amount of natural gas usage permitted for ‘preheating’ of the solar towers,” thus spinning the truth and “fudging the numbers.” http://canadafreepress.com/index.php/article/67861
Eric Wessof wrote in his article, “Rest in Peace: The List of Deceased Solar Companies, 2009 to 2013,” in which he tallied the solar companies that went bankrupt, were acquired, closed, restructured, sold for a song, or in the endangered category, a lengthy list of 102 companies, hardly a success story. http://www.greentechmedia.com/articles/read/Rest-in-Peace-The-List-of-Deceased-Solar-Companies-2009-to-2013
The Washington Post reported on the billionaire Vinod Khosla who invested in a biofuel plant called KiOR in Columbus, Mississippi, that “was supposed to turn wood chips into hydrocarbons that could be poured straight into a refinery, pipeline, or car.”
Instead of producing the magic catalyst, on November 10 2014, KiOR filed for bankruptcy, “leaving behind 2067 creditors, including the State of Mississippi which can ill-afford the bag of $75 million, 20-year, no interest loan.” The promised 1,000 jobs to be created by December 2015 never materialized. (“The Misadventures of a tech billionaire confronting the stubborn economics of the biofuel business,” Washington Post, November 30, 2014)
According to Washington Post, KiOR spent $5-$10 per gallon notwithstanding the cost of building the plant. KiOR’s losses were $629.3 million and had revenues of $2.25 million. The bankruptcy was inevitable even though “Khosla spent $85 million and Bill Gates $15 million in October 2013.”
The project of transforming biomass into fuels by using “catalytic pyrolysis, or cracking,” an invention by a company in the Netherlands, BIOeCON, turned out to be a renewable money pit for KiOR which produced very little energy. http://www.bioecon.com/
Among other energy programs and initiatives for renewable energy, President George W. Bush promised in 2006 “to make ethanol not just from corn, but from wood chips and stalks and switch grass.” http://georgewbush-whitehouse.archives.gov/infocus/energy/
Using corn as fuel was not such a great idea either; corn that fed billions of people around the world skyrocketed in price in recent years and became scarcer, causing people in many countries to riot.
Wind turbines caused health hazards in humans and millions of bird kills around the world, some on the endangered species list. The energy produced was certainly dirty green and inadequate for most developed countries. Conventional fossil fuels were used to run gears to prevent rusting and to supplant electricity when the wind turbines were idle. Turbines had to be cut off in some areas at speeds of maximum production of electricity because the noise and constant thumping was unbearable to the nearby residents. Just because a turbine rotates, it does not necessarily mean that it produces electricity.
Are most large economies of the world ready to ditch fossil fuels entirely as proposed in Lima Peru by the environmental architects of gloom and doom alarmism and replace them with renewables? The answer is a resounding no, unless we are ready to live in the dark ages again.
Copyright: Ileana Johnson 2014