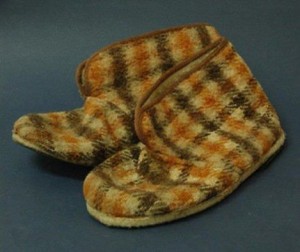 Freedom’s just another word for nothin’ left to lose,
And nothin’ ain’t worth nothin’ but it’s free. – Kris Kristofferson’s song

The photograph of a pair of kids’ booties posted on a social website, “Copilaria anilor 80-90,” triggered a flood of memories – it was the exact pair that I used to wear as a child. They were the only ones available for purchase, and required uniform for all children who attended pre-school and kindergarten.
I re-posted the photo thinking that a few of my Romanian friends would comment, but I was wrong. Instead, my much younger cousin from Romania remarked that she had a pair in pre-school in the 1980s. Who knew that commies would stick to the same sorry, cheap, and ugly pair of booties for decades?
One American lady, Gemey, who had traveled to Romania as a missionary in the 1990s, long after communism was temporarily dismantled, wrote, “Having grown up here in the U.S., it’s difficult to imagine no electric, no water, no heat, little food, few clothes. I saw all that, well not the heat, no AC in July was bad enough! But it’s a beautiful country, reminds me of Virginia or Missouri where I live. Green and fertile and full of promise each day. And the people that I met were strong and resourceful and coped with all these situations with grace most of the time. But the moment things got a little better, people were clamoring for more, communist politicians promised more [just like the Bolsheviks] and they voted the commies back into office… sounds like the U.S. doesn’t it?”
She continued, “Superstitions die hard. Even medical doctors believed that evil spirits blew into open windows and people would get sick if they walked barefoot.” They also believed humans got sick if exposed to a slight breeze or draft. Consequently, kids had to wear these felt booties called “sosoni” or “botosei,” crudely made and itchy, in pre-school and kindergarten.
Mom always yelled at me to put on house shoes and she always kept an assortment of slippers in her closet in the U.S. Her granddaughters were amused and loved to irritate her by going barefoot on any kind of surface.
It’s hard to overcome any government dependency, even the communist variety. I have many older relatives who can barely make ends meet today because their pensions from the communist era are so small, yet they are nostalgic for communism. They want to live on the “take-care-of-me plantation,” and “I will do as you say farm.” Why try hard at all when everyone makes the same miserable salary?
The elderly today make an eager voting block that turns out every time to elect the communists back in power – the grey hair commie-voting brigade. They are like jail inmates who spend their entire lives in prison and, when freed, have no idea how to live on the outside, in the free world. They want back in prison where their needs were met poorly but were not expected to do much in return except be on their best behavior, be obedient to strict rules, and be willing to stay behind bars, the very bars that robbed inmates of their freedom in the first place.
I asked my cousin Maria why she voted for communists and she answered, they gave us a small pension, we did not have to work, the rent was low and subsidized, food was hard to find but was also subsidized, cheap alcohol was plentiful, we had rationing coupons, everyone was equally poor and miserable, we did not have to compete, we did not have to try very hard. We just understood that the commies in power were wealthy beyond belief but we accepted that as long as they threw us our daily crumbs and bones. We knew our place and they “protected” us.
What did they protect you from, I asked her. We had a miserable roof over our heads and medical care was free. But Maria, it was free but you could not see doctors nor buy medicines because they were not available, shortages were constant, and you had to fight in lines for the last loaf of bread, toilet paper roll, or bottle of cooking oil, and you had to pay bribes in cash and goods to be seen on time by a better doctor. True, she said, but we had free aspirin and generic Tylenol. She looked down at her feet and remained silent. My arguments did not seem to penetrate her skewed view of reality. No matter what I said, if she had a choice, she would choose communism again and again, graciously resigned and happy with government dependency in exchange for empty promises and scratchy felt booties for her grandchildren.
Having seen the insidious welfare dependency under crony capitalism and under socialism/communism, I seriously doubt that I could change an elderly person’s mentality of addiction to government handouts, even handouts not worth having.

2 thoughts on “The Kindergarten Booties”