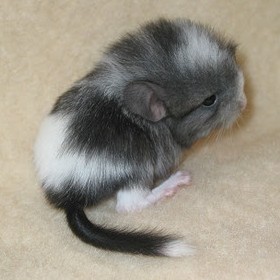 Photo: chinchillaguide.com
Genesis 4:21
The Lord God made garments of skin for Adam and his wife and clothed them. *

I touched the buttery soft banded white and grey chinchilla coat on the mannequin, draping a fiery red dress. I wonder how many tiny animals were sacrificed to make this beautiful coat that would adorn the shoulders of an elegant socialite who might get cold in the climate change winter air on her way to a fashionable restaurant or a D.C. party. The $50,000 price tag can certainly buy a small house in the south.
The label says that the full-length chinchilla came from Slovakia, the former territory of the Socialist Republic of Czechoslovakia which split into the Czech Republic and Slovakia after the “fall” of communism in 1989.
The red dress under the chinchilla coat cost $300. It’s like drinking a glass of cheap red bubbly Moscato in my 85-year old crystal glass from Grandma Grace.
This department store is certainly not alone in its offering of high-end furs. There is another store that actually specializes in fur coats. I had expected this furrier to go out of business long time ago but it’s been around for quite some time. There are no PETA protests and no sprayings of red paint like they used to do in the 1990s.
According to furriers, it takes about 130-200 chinchillas to make a coat, depending on size and length. Sixty-five minks, 10-24 foxes, and 60-80 sables must die in order to make a full-length coat.
Chinchilla fur is thirty times softer than human hair. Because the fur is so thick, 20,000 hairs per square cm, parasites such as fleas suffocate in its thickness. A chinchilla has more than fifty hairs growing from each follicle. The animal must bathe in volcanic ash or dust frequently in order to remove excess oil and moisture from its fur.
Who needs furs in our climate change? If you ask environmentalists, since the planet is warming globally, this dastardly man-made climate change, it is ridiculous to even own a fur. It is an unnecessary fashion statement of social status, like driving a gas-guzzling or an expensive car. Even if you live in permafrost regions, with all this polar high tech clothing, who needs furs in order to prevent frost bite or freezing.
There are 6,000 fur farms in the European Union, capturing 63% of the mink production alone, 64% of farms are in northern Europe, 11% in North America, and the rest are in places like Argentina and Russia. https://www.change.org/p/eu-ban-fur-farming-in-the-european-union
Major producers are China, the Netherlands, the Baltic States, Finland (fox pelts), Russia, Canada, U.S., and the European Union (70% of fox pelts production), with China being the largest re-exporter of finished fur products.
Notwithstanding PETA’s dreadful description of the caged conditions of animal farms destined for fur coats, environmentalists tell us about the environmental pollution by chemicals such as ammonia, formaldehyde, hydrogen peroxide, and other chromates and bleaching agents used to preserved and dye furs. These chemicals prevent the decomposition of furs over time in owners’ closets and, in their opinion, are a waste of resources that should be used somewhere else.
According to the environmental lobby, the production of one fur coat from farm-raised animals uses “more than 15 times more energy than producing a faux-fur coat.” They do not say how they arrived at this number and I am not holding my breath for its accuracy.
The much maligned and often cruel modern fur industry occupies an important part in the history of the United States. “Beaver furs were one of the first commodities settlers traded with Europe,” more specifically France.
Beaver pelt traders stretched their routes from Green Bay, Wisconsin, to the Mississippi River with outposts in St. Louis and New Orleans, leaving their French mark in names such Des Moines, Iowa and Detroit (French détroit, “straits”), Michigan.
The fur trade followed the beaver in the north and to the Pacific north-west. You may object to wearing furs today but states like Washington, Montana, Idaho, Oregon (Benny the Beaver), California, and Wisconsin owe their existence to the beaver fur trade.
* Chriss R. says, “Notice he didn’t make them wool clothes, or linen clothes. He used SKIN—leather!”

One thought on “Furs and Environmental Political Correctness”