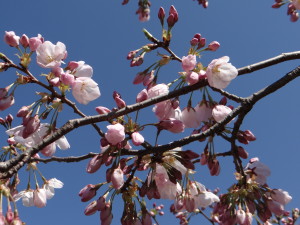 Cherry Blossoms
Photo: Ileana Johnson 2015
It’s late April 2015 and it is still quite cold and the growing season is behind – an unusual late and frigid spring. The trees are just now sprouting green leaves and a few brave ones have even bloomed. If you ask the environmentalists, it is global warming. If it snows, it is global warming. If it’s hot, it is global warming. Everything is global warming and must be redressed immediately or the earth will perish. Hundreds of billions have already been spent around the globe on a deliberately manufactured panic. I am not sure who coined the term “climate change industry” but it is an apt description of the snake oil salesmen who have become billionaires on the unfounded and irrational fear of debunked global warming and of climate change based on manufactured consensus science. The climate has been changing for millennia in cyclical periods dominated by either unusually cold or unusually hot temperatures.
It is convenient to the promoters of the climate change industry to purposefully confound weather events with climate. Having declared that the “science is settled,” the global warming scaremongering environmentalists are moving on to the next target of limiting our property rights and freedoms via carbon footprint and draconian, coal-industry destructive EPA regulations.
After all, the number one threat to our national security has been declared to be climate change. It is not the crushing out-of-control debt, it is not the planned and unchecked flood of immigrants into countries around the world, changing the demographics and eliminating sovereignty to the benefit of global elitist control, it is not ISIS beheading Christians and occupying the formerly liberated towns and provinces in Iraq, and it is not Iran with its nuclear bomb program, threatening to wipe Israel off the map, our ally and the only sane patch of reality in the Middle East.
The climate change industry has admitted through a Freudian slip that their agenda of climate change is “disrupting national economies, costing us dearly today and even more tomorrow.” Of course climate has been changing and we are in a cooling period now but truth cannot impede the liberal political advocates’ agenda of taxing rich countries more, spreading the wealth, and destroying our economy in the name of protecting the Earth.
The climate change industry has managed to transform a natural phenomenon of climate change into a global disaster that needs to be addressed by bureaucrats through fundamentally changing how we live, what we own, how our economies are run, by carbon footprint taxation, Smart Growth, Green Growth state and local programs around the world, and through weather modification spraying of chemicals into the atmosphere. This spraying of chemicals (chemtrails) is really affecting the weather and the growing season for agriculture, reducing yield. The climate change industry has become such a religion of environmentalism gone berserk that they are now trying to ban farming.
Electricity costs are going up, smart meters that catch on fire have been installed everywhere in order to control people’s energy consumption and in-home ambient temperature, and many electricity generation plants are scheduled to be closed due to draconian EPA regulations. The government’s all-out assault to redress climate change through regulatory planning and financial control is having a serious impact on our economy, the coal industry, the oil industry, and on everybody’s lives.
The hypothesis that rich nations caused climate change by burning fossil fuels to produce energy has never been proven by IPCC’s computer modeling. The fact that now the hypothesis changed its name from global warming to climate change in the face of obvious 18 years of global cooling is enough evidence that the purveyors of the industry of climate change are desperate but are not giving up. There is never a shortage of young, idealistic rioters-for-hire who, for a nominal fee will demonstrate anywhere against global warming, even in Quebec in the snow. Fleecing rich countries with carbon taxes is too lucrative a scam to give up the agenda.
The real reason behind the global warming scare and why the United Nations’ alarmists have been driving us into forced submission of environmentalist stewardship is that they want capitalism destroyed and replaced with their vision of a utopian communist economy that has never worked across the centuries. These progressives have a problem with the Industrial Revolution, with “fossil fuels,” (They are not so fossil since the earth keeps producing them), with the only successful economic model that has provided generous income to all these hot-air spewing, idle bureaucrats, who have nothing better to do than meet in exotic locales planning the destruction of the goose that lays the golden eggs that feed their exorbitant lifestyles, salaries, bonuses, and pensions.
Christina Figueres, Executive Secretary of U.N.’s Convention on Climate Change, disclosed the real reason for the climate change industry when she told us that they are not interested in saving the world from global warming Armageddon but they want to destroy capitalism. “This is the first time in the history of mankind that we are setting ourselves the task of intentionally, within a period of time, to change the economic development model that has been reigning for at least 150 years, since the Industrial Revolution.”
Copyright: Ileana Johnson 2015