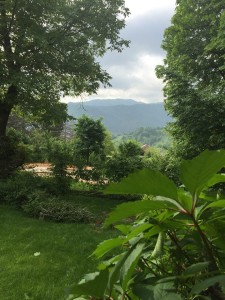 Photo: Ileana Johnson 2015
Transylvania is a land of enchantment of middle and northern Romania with its breathtaking and spectacular landscapes, its rich and tumultuous history, bloody battles, occupations, and a proud population that maintains its distinct culture and art.
It is bordered on three sides by the Carpathian Mountains that appear on maps like a natural boundary between Transylvania and Wallachia, the province made famous by Vlad the Impaler, “Dracula,” Prince of Wallachia, who made Bucharest its capital in 1459. The pristine and wild countryside of Transylvania (Latin for “across the forest”) is sometimes impassable to humans.

Cantacuzino Castle Photo: Ileana Johnson 2015
Transylvania has a distinct Hungarian and German influence which can be seen in its fairy tale Hansel and Gretel architecture, its cuisine, the spotless streets, order and civility, in how successfully cities are run, and the seriousness on the faces of its population. However, many ethnic Germans have left in the 1970s when the communist Romanian state signed an agreement with West Germany.
Romanian settlements dating back to the Iron Age were found in the southwestern part of Transylvania. Because the area has been part of the Hungarian and later the Austro-Hungarian Empire for hundreds of years, there is a strong Hungarian and German influence everywhere. Schools, colleges, and theaters are still operating in Hungarian and German languages.
Hungarian kings had invited Saxons (from the province of Sachsen) in the 12th and 13th centuries to settle in Transylvania. Some of them were gifted goldsmiths, others were wood carvers and builders. Their presence is reflected in the beautiful medieval citadel churches built in southern Transylvania.

Bran Castle Photo: Ileana Johnson 2015
Hungarians and Germans left behind castles, imposing manors, palaces, and churches in towns such as Cluj-Napoca, Alba Iulia, Sighisoara, and in the old Saxon city of Sibiu (Hermannstadt) with its famous medieval houses with rooftop “eyes,” roof vents that look like watchful eyes.
The miners and farmers in western Transylvania called “Moti” trace their roots for thousands of years. The Apuseni Mountains are rich in mineral reserves, rare metals, and gold, particularly in the contentious region of Rosia Montana.
The archeological evidence found at Sarmizegetusa speaks volumes of the rich civilization of the Dacians who were conquered by the Romans in 106 A.D. and colonized into a Roman Empire province. The story of the battles between the Romans and the Dacians is vividly told in the freezes of Trajan’s Column in Rome.
According to National Geographic , the eastern part of Transylvania has “the highest concentration of ethnic Hungarians.” Buildings have a different style, ethnic costumes vary, and many inhabitants speak both Romanian and Hungarian.
Cluj-Napoca is “the cultural and economic hub of Transylvania.” Alba Iulia, the former Hungarian capital, has an interesting Habsburg baroque citadel. It was the city where Romania and Transylvania became one on the great Union Day, December 1, 1918.
Bistrita, in the northern part, is the location where Bram Stoker set his novel “Dracula” in 1897. His fictional character, Jonathan Harker, spends the night in Bistritz (Bistrita) on his way to Tihuta Pass (Borgo Pass in Hungarian) where Voivode Vlad Tepes’ real castle ruins are located. Bram Stoker never traveled to Romania; he used geographical information from his local library.

Sibiu Church
Sibiu is the largest medieval town in Romania, built in the 12th century with three concentric fortified walls (a few have survived), squares (a large and a small one), stairways, and strongholds built and fortified between the 13th to the 18th centuries.
The two famous battles of Sibiu on March 18 and March 25 1442 were fought nearby between the army of the Hungarian Empire and the army of the Ottoman Empire. Approximately 4,000 Hungarians and 15-20,000 Turks were killed in the two battles which resulted in a defeat and push back of the Ottomans.

Sibiu restaurant (Photo: Ileana 2015)
The Large Square (Piata Mare) served as a grain market in 1411, medieval executions, and later used for carnivals, meetings, and now rock concerts. The little restaurant called Butoiul de Aur (The Golden Barrel) has been serving patrons since the 15th century. Houses dating back to the 13th and 14th centuries are the oldest surviving homes with colorful tiles, sometimes mosaic-ed in beautiful patterns and with “eyes” on the roof for air venting. 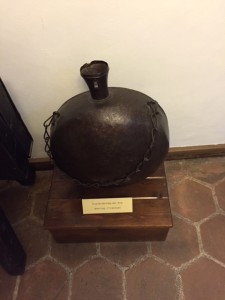 Iron Vial (Photo: Ileana Johnson 2015)
The tiny four-room pharmacy museum, that used to be a 17th century apothecary, displays curious instruments and recipes for potions perhaps made by Samuel Hahnemann (1755-1843), the father of homeopathy.

Sibiu Bridge (Photo: Wikipedia)
The largest Catholic Church in Sibiu stands majestically between Piata Mica (Little Square) and Piata Mare (Large Square). Interestingly, on the day I visited, it was displaying a large banner at the back entrance urging people to stop fracking for natural gas and to stop mining in Rosia Montana. Since the Pope is now a climate change expert and population control expert, why not turn the church into an environmentalist NGO? 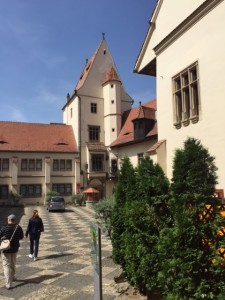 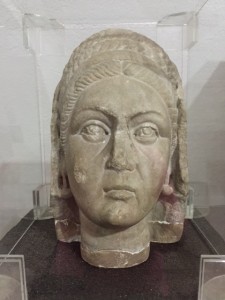 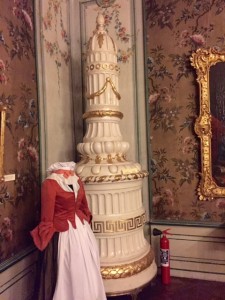 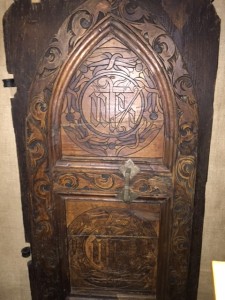 Medieval door (Photo: Ileana 2015)
The National Brukenthal Museum is a treasure trove of art collections which Baron Samuel Von Brukenthal, the former Governor of Transylvania (1777-1787), housed in his Palace built in the Grand Square in Sibiu. Showcased in the baroque and rococo interiors are famous masters like Jan van Eyck from 1420, German and Austrian painters, Romanian painters, personal favorites like Teodor Aman and Nicolae Grigorescu, gold and silver coins, jewels, engravings, intricately carved furniture, books, weapons, silver and gold drinking cups and goblets, medals displayed in his former library, sculptures, costumes of the era, whimsical porcelain steam stoves interconnected throughout the palace, a novelty for that period, a lapidarium with statues of Roman gods, Roman roads mile markers, and votive altars from Apulum and Ulpia Traiana Sarmizegetusa, dating to the 2nd and 3rd centuries A.D. 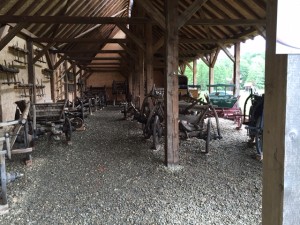 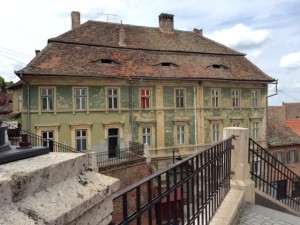 Sibiu house with “eyes” (Photo: Ileana Johnson 2015)
Four miles south of Sibiu, in the forest of Dumbrava, we found the largest Museum of Popular Traditional Civilization ASTRA in the country. Spread on 237 acres of rolling hills and lakes, it is the largest museum in Europe that showcases homes from different parts of the country, windmills, boats, barns with complete carriages, and many implements and tools necessary for everyday living. Each home is surrounded by a typical yard with ploughs, carts, barns, and interiors are decorated just like people were still living there and have left for the day to tend to the gardens or crops. The smell of old wood, mildew, wildflowers, and crushed fruits was overwhelming. A slow-moving red fox, accustomed to human presence, crossed the nearby yard.
The outdoor ASTRA museum is so hugely popular that locals use it for recreation, boating, and celebration of major life events. On the day we visited, there were three weddings at the wooden chapel and brides and their entourage were taking photos on the premises. I was fascinated by the various windmills displayed, and particularly a floating mill that used hydropower to grind grain.
All the workshops manufacturing silk and hemp, distilleries, forges, wine presses, paddle-wheel ferry, the blacksmith’s shop, and other machinery used by Romania’s country folk were actually in working order.
It is only fitting that this huge outdoor museum with its well-preserved history is called ASTRA. ASTRA was a patriotic literary society of the 18th century, located in Sibiu, which was instrumental in Transylvania’s unification with Romania in 1918.
To the east of Transylvania is the famous Seckler Land. The Secklers are Hungarian-speaking people which are called “secui” in Romanian. They use their own language, have fascinating traditions, customs, delicious cuisine, and schools. No industrial development has touched this plateau where old farming methods are still used today to cultivate the land. It is a land where Hungarians have migrated to in the 9th century from the Don River. The Hungarians were given land in exchange for the promise that they would protect the western Hungarian border against the invading hordes of Turkish tribes. There is a Crusader’s cross decorating a church in Tusnad as evidence of Christian support against the invading Muslims. Signs abound both in Magyar (the Hungarian language) and Romanian language.
The Hungarian king Endre II brought in the Teutonic Knights in 1211 to protect the southeast border of Transylvania from the Cumans, a migratory Turkic tribe. It was these knights who built stone castles all over the area surrounding Brasov. According to National Geographic, because the Teutonic Knights liked this magnificent area called Barsa Land and were going to claim it for the Pope, King Endre II forced them out in 1225 with Saxon help. 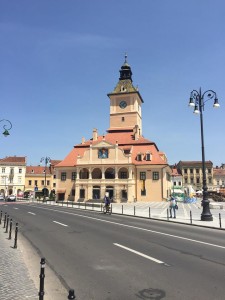 Ethnography Museum in Brasov (Photo: Ileana Johnson 2015)
The jewel of Transylvania is Brasov (Kronstadt). There are so many significant places in Brasov and its vicinity that it merits a story onto itself.