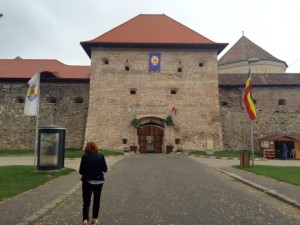 Cetatea Fagarasului (photo: Ileana 2015)
We found Cetatea Fagarasului half-way between Brasov and Sibiu, an hour drive off the beaten path for foreign tourists. I would venture to say that we were the only overseas visitors on that drizzly morning. The fortress was surrounded by a fosse populated by black and white swans, perfect sentries for a castle that was often under Ottoman siege. Weeping willows lined the street leading to the entrance. 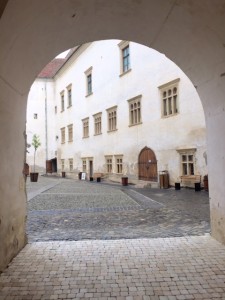 Main Courtyard (photo: Ileana 2015)
I thought we were going to see a 14th century fortress but I discovered one of the many prisons Ceausescu had used around the country to punish those who disagreed with his regime and dared to protest his reign of terror.
Fagaras Fortress was built between the 14th and 17th centuries. The fortress was preceded by a wooden fortification and earthen wall dating from the 12th century. In the 16th century the fortress was transformed into a castle. Gabriel Rakosi I and Gabriel Bethlen, Transylvanian princes, decorated it according to Renaissance models in the 17th century. 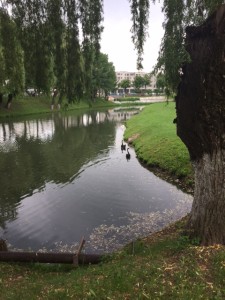 Moat with swans (photo: Ileana 2015)
The Fagaras Fortress, surrounded by a two-meter deep water moat (“fosse” in Old English) fed through a channel from the Olt River (since 1676 from “Superior lake”), was so impenetrable that, although attacked countless times, it was never conquered.

Bellows (photo: Ileana 2015)
The now green exterior courtyard had a medieval scaffold, which had been used for the last time in the 1970s. There was a carriage and a blacksmith’s shop with iron tools and bellows. 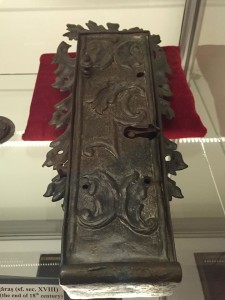 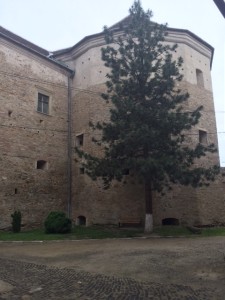 Prison Tower (photo: Ileana 2015)
Access to the castle was made through two bridges (one pedestrian) and three consecutive lifting gates. On the northern side, built on wooden pillars, there were two powder houses (1667-1676). A boat and six swans were mentioned in 1656. Surviving on daily ration of rye bread, the swans multiplied to nine and four chicks by 1676. During our visit I saw two pairs of swans, a black and a white one.
The museum archives described how one Turkish historian, geographer, and traveler, Elvia Celebi, who crisscrossed the Ottoman Empire for 40 years, actually participated in the siege of Fagaras Fortress in 1661. He wrote that the Turks led by Ali Pasha, after setting fire to the citadel, were met with resistance from many soldiers and inhabitants gathered from the surrounding area. The Ottomans had to withdraw after 14 days of siege.
Gabriel Bethlen had a Hussars’ fortress built in 1623 in the northern part of the fortress, by the moat. The Ottoman sieges must have destroyed the Hussars’ fortress because it was never mentioned in any records or inventories after 1676.
According to museum archives, “After 1696, the fortress became a garrison for the Austrian army, then for the Magyar army, and after that for the Romanian army. Between 1948 and 1960 the fortress was a communist prison.” 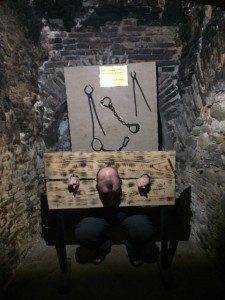 Torture cell with tools (photo: Ileana 2015)
At the base of the Prison Tower was the jailer’s house. Records in 1632 mentioned 12 leg cuffs, 14 handcuffs, a tree trunk, an axe, leg iron weights, and a hangman’s broadsword. Under the jailer Ambrus Janos the inventory of his torture chamber swelled to 54 pairs of leg chains. By 1676, there were three dungeons in existence. One of the castle towers housed an Iron Maiden, a particularly cruel form of punishment. The unfortunate human was trapped inside an iron suit fitted with spikes which pierced his body, avoiding vital organs, but allowing for a slow and agonizingly painful death through blood loss. 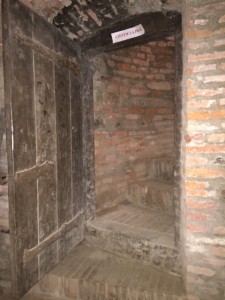 Stair to jail cells (photo: Ileana 2015)
The cells, where anti-communist fighters from Fagaras Mountains and other parts of the country were held between 1948-1960 when the fortress was a prison, were cold and dark. The treatment of political prisoners was beyond brutal. National Geographic mentioned that “During the brief moments when their cell doors were opened, they scratched messages on the walls” which are still visible today. 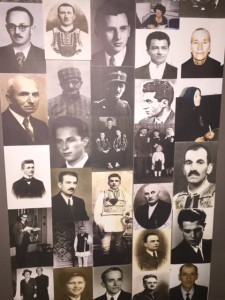 Faces of victims (photo: Ileana 2015)
The museum exhibited photographs of those imprisoned and killed, original 1960 documents of peasants’ obligations to turn in a quota of everything they produced or grew, documents of rationed consumption, rationing of clothing and shoes, rationing of consumption of meat permitted only on Saturday and Sunday for a total of 250 grams weekly, with a supplement for those who actually worked in a factory, and the empty promise that bath soap and powdered detergent would be distributed soon. This rang similar to the current rationed consumption and dire economic situation in Venezuela where Hugo Chavez’s socialism has destroyed the once self-sufficient economy.
Before the socialists took complete control of the country, the Directive NKVD 2-6 of 1947 made sure that any farm would be unprofitable to farm or rent to farm in order to facilitate collectivization. If the peasants offered more resistance to collectivization, they were to be forced to turn over to the communist party a higher quota of what they produced.
A poster from that era stated, “Long live the Soviet Union, the liberator of the Romanian people.” The Soviets actually destroyed every freedom and the wealth and comfort that the Romanian people formerly enjoyed under the monarchy and imprisoned them into a terrifying concentration camp unlike any other for 41 years.
“Let us promise anything asked of us, but, when the moment will come, let us remember that the communist honor is to not fulfill these promises,” said V.I. Lenin in his “Empty words about freedom.”
The massive propaganda was directed from Moscow because the Romanian commies did not have experience yet. Under their guidance, the Romanian Communist Party started a campaign of constant agitation and mobilization of the population, and non-stop manufactured crises.
The “enemies of the people” were identified during public meetings, press releases, and public trials. Dailies, magazines, newspapers, posters, journals, brochures, and pamphlets continued the indoctrination. An entire army of community organizers were released to agitate the masses.
A massive campaign to destroy the national memory, to falsify the past, and to rewrite history and the present began. The press pushed communist utopia non-stop. “The political police, under Soviet control, began a societal surveillance by agents and informers,” according to museum archives.
Once the urban population and the elites were subjugated, next came the peasants’ turn; they had been pretty much left alone until 1949. The commies made the peasants’ livelihood very difficult by forcing them into obligatory back breaking quotas and by controlling their commerce with agricultural products. The communists eventually destroyed the peasants’ individual property rights. Small farmers were constantly demonized, beaten, threatened, tortured, and imprisoned until they relented to become part of the communist collectivization agricultural machine.
In Tara Fagarasului which is the larger area surrounding this fortress prison in Cetatea Fagarasului, the social order was totally and systematically destroyed. Eighty percent of the population was considered well-off farmers, wealthy farmers, and middle peasants. More than 1,000 locals suffered in forced labor camps, were deported to communist prisons around the country, and thousands of family members were discriminated and maligned socially and economically.
The wealthy farmer was labeled “chiabur,” from the Turkish word “kibar,” meaning “a good steward.” The farmers were demonized and the word “chiabur” was successfully used by communists as a label to justify repression against private land owners. The manufactured word “chiabur” was not unlike the bogus term of “white privilege” being floated by the main stream media and academia in our own country.
The first communist president, Gheorge Gheorghiu-Dej, was advising the apparatchiks involved in the land confiscation, that they should confiscate land in such a way that it did not look like nationalization, but at the same time, they should not leave the land owners much, “just enough to buy a cigarette,” and to pay them for their tractors scrap metal prices. “For better combines that do not need much repair, we should pay them 5 percent more.” (Gheorghe Gheorghiu-Dej speech on March 26, 1959)
Gheorghiu-Dej continued, “If a rich landowner protested, he can be shot on the spot, to let all know who would dare not to turn in their quotas what will befall them.” (Instructions to all member of Securitate, 1948)
I still remember, as a child, being forced to wait in long lines with my parents to view this man’s body in state when he passed away. The entire country was supposed to mourn his passing even though they hated his guts for what he had done to the country.
To justify the existence and establishment of the terror state, enemies had to be found. If none were found, enemies had to be invented, said one of the Soviet community organizers and agitators, Tzvetan Todorov. In 1951 forced deportations spread ethnic Swabians and Romanians around the country, especially those who opposed the regime and collectivization. Many were sent south in Baragan and Basarabians were deported to Fagaras. But an armed resistance developed in the Fagaras Mountains in Transylvania.
As part of the same Directive, NKVD 2-6 of 1947, all parties had to be unified under one party, making sure that all key positions would be occupied by the secret (Soviet) services.

Anti-communism Memorial in Tara Fagarasului (photo: Ileana 2015)
Cetates Fagarasului, the medieval fortress, saw the incarceration between September 1950-April 1960 of over 4,000 former employees from the Information Services, State Security, military judges, policemen, diplomats, and those who helped the anti-communism fighters. Prisoners were jailed without due process and without sentencing. Because of the harsh and inhuman imprisonment conditions, 166 generals, officers, clerks, workers, and peasants died there.
I dug up a tiny rock from the inner courtyard for my friend who collects stones from different parts of the world. I washed it carefully before packing it, wondering how much blood of innocents tortured or killed in battle or in prison had washed over these rocks over the centuries.