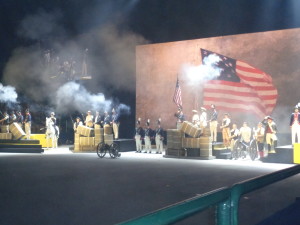 A crowd of 7,500 patriotic Americans attended the U.S. Army’s 2015 Spirit of America show, a performance highlighting our proud history through the eyes of the American Soldier. Aptly named, the Patriot Center on the campus of George Mason University in Fairfax, Virginia, was brimming with excited men, women, and children who came to pay their respects to our elite soldiers who have sworn to uphold our Constitution and to defend our country so that we may enjoy the freedoms that most take for granted.
The music, the historical narration, re-enacted battle scenes, the live-action dramatization brimming with heart-stirring songs, the bands, and simulated gun and cannon fire told the story of men and women who were either conscripted long-time ago or have volunteered in recent times, having left their friends and families behind and everything they held dear, never knowing whether they would come back or not from the front or theater of operations, to protect and defend our beloved country, the United States of America. 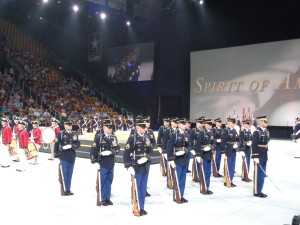 The Army’s elite ceremonial units featured the U.S. Army Band “Pershing’s Own” and the 3rd U.S. Infantry Regiment known as The Old Guard, the oldest active-duty infantry unit in the Army.
The Old Guard included the U.S. Army Old Guard Fife and Drum Corps, the Caisson Platoon, the Commander-in-Chief’s Guard, the Continental Color Guard and the U.S. Army Drill Team. Guarding our nation’s capital, these soldiers have deployed and are ready to deploy again and again to defend our nation and the National Capital Region. Showing stripes on their right sleeves, indicating how many times they had deployed into battle, some young men had amassed as many as six stripes.
The Spirit of America 2015 extravaganza which cost the U.S. taxpayers $7 million per year will be shown free of charge in Boston, MA, Albany, NY, Fairfax, VA, and Hershey, PA. Past performances included Washington, Columbus, Pittsburgh, Cleveland, Manchester, Worcester, Rochester, Providence, Grand Rapids, Charleston, Jacksonville, Greensboro and Columbia. 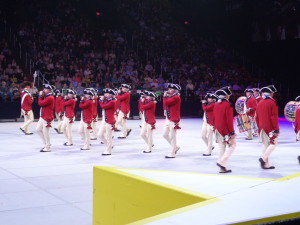 The Army’s largest community outreach goes back to times before World War II with 3rd Cavalry Regiment holding military shows during winter months at Fort Myer in Arlington, VA. The Old Guard and “Pershing’s Own” showcased the talents of our soldiers from 1961 until1970. Renamed Spirit of America in 1970, it was retired in 1996, but brought back in 2000 with the U.S. Army celebrating its 225th anniversary.
The Old Guard Caisson Platoon takes its name from “the horse-drawn wagons once used by the American Expeditionary Force to supply guns, ammunition and spare parts to the battle lines.” These caissons are used today to carry Old Glory-draped caskets of soldiers who have made the ultimate sacrifice, to their resting place at Arlington National Cemetery.
I witnessed one such burial on a bitter cold January day. The pomp and circumstance was overwhelming. The silent and crisp morning punctuated by the military cadence, the clip-clop of horses and the gun salute, brought me back to the reality of a selfless human being who was put to rest, a soldier who gave his life for the United States of America. For him the oath was not just a piece of paper, it was real. He will forever rest in a sea of tombs covered in white and pristine snow, a tomb adorned with a red carnation wreath like stains of blood, real blood shed in eternity.
The horses train with soldiers for these moments. They accept and carry dutifully the riders on a modified 1928 McClellan saddle. Infantrymen maintain the stables and care for these magnificent horses.
The Commander-in-Chief’s Guard, was established in 1776 as General George Washington’s personal guard of the Continental Army, with the best soldiers from each colony. Today the soldiers wear historical colonial uniforms with white wigs and are armed with 12-pound replica British Brown Bess muskets and Charleville muskets with 13-inch bayonets. 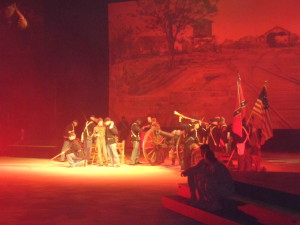 The U.S. Army Old Guard Fife and Drum Corps promotes and maintains America’s oldest military musical traditions. Their uniforms are patterned after the field musicians of the 1st American Regiment of 1784. The blue-trimmed red coats enabled commanders then to recognize musicians through the smoke of battle. This unit performs at the White House for visiting dignitaries and heads of state with impeccable drill accuracy.
Precise marching and crisp rifle drill established the rigid standards for the U.S. Army Drill Team in 1948. The best soldiers were chosen for their “dexterity, strength, and trim military bearing,” using bayonet-tipped 1903 Springfield rifles which are quite heavy. A spectacular breath-taking moment involved the rifle flip over the right shoulder from the front rank, 15 feet back to the last rank with the bayonet attached. The soldier caught the rifle mid-air.
After 75 days of hard training and “rigorous and competitive drill practice,” the drill team is selected. I was surprised by the political correctness of introducing a first-ever female as their leader. I knew that women could not serve as infantry due to the difficult physical challenges.
The U.S. Army Ceremonial Band performs at 2,000 military funerals each year at Arlington National Cemetery and at other national and international missions. The U.S. Army Concert Band, the U.S. Army Orchestra, and U.S. Army Voices are elite ensembles composed of members who “have trained at the most prestigious music conservatories and universities in the country.”
For our U.S. Army and its unrivaled soldiers, this year marks “240 years of selfless service to the nation.”