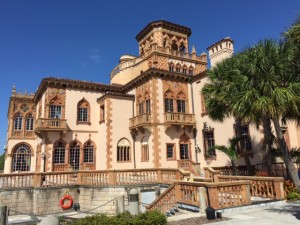 Ca’D’Zan Mansion
Photo: Ileana Johnson Oct. 2015
On a beautiful October day, we finally experienced Ca’D’Zan, the House of John, the 1920s Venetian Gothic palace on Sarasota Bay, home of John and Mable Ringling, their Museum of Art, and the beautiful gardens decorated with replicas of Italian statues. Located in Sarasota, Florida, the property was bequeathed to the state of Florida in 1936.
In 1927, John Ringling moved the winter quarters of the Ringling show from Bridgeport, Connecticut, to Sarasota County where it remained for over 60 years. The Ringling Bros. and Barnum & Bailey Circus now rehearses their new show in Tampa.
P.T. Barnum (1810-1891) chose Bridgeport, Connecticut, as his home where he built three mansions, Iranistan, Waldemere, and Marina. Iranistan was modeled after George IV’s Royal Pavilion in Brighton, England, with furniture made expressly for every room. It burned to the ground in 1857 during renovations. Waldemere (1868) was a Victorian-style structure overlooking the Long Island Sound in which he lived for 20 years, surrounded by treasures collected from around the world. He built Marina next to Waldemere three years before his death. 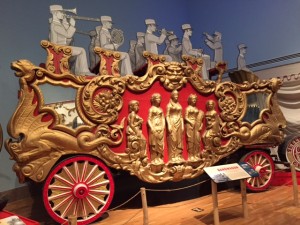 Calliope Photo: Ileana Johnson Oct. 2015
P.T. Barnum built a highly successful circus that grossed $400,000 in its first year and was proclaimed in 1872 “The Greatest Show on Earth.” He partnered in 1888 with James A. Bailey to form the Barnum and Bailey Circus.
This visit was a fascinating incursion into the secrets of the circus of long time ago. There is a starry-eyed child in each of us who loved the circus growing up and remembered with fondness the big top acrobats, elephants, tigers, the daredevils, the tight rope performers, and perhaps clowns. People have fantasized about running away with the circus, to see the world through their lifestyle, and some did.
The circus dates back to the period of 2000-1750 B.C. in many cultures, showcasing unusual skills and abilities of the human body. Jugglers appear on the wall of a 4000-year old Egyptian tomb.
Traveling groups and later troubadours brought with them music, poetry, jugglers, news, acrobats, dancing bears, trained dogs, the strange wonders of the world, and exciting shows from outside of their small world.
Country fairs in the 16th century England and the 18th century Commedia dell’Arte in Italy with its Harlequin dressed in multi-colored patched costumes would set the stage for the modern circus (1750-1840).
“In 1768, a retired British cavalry officer, Phillip Astley (1742-1814) joined together feats of horsemanship with acrobatics, balancing, juggling, and comic acts and the modern circus was born.” Astley performed in London at the Royal Amphitheater of the Arts where shows were lit by three great chandeliers with five hundred candles. (Museum Archives)
The father of modern clowning is Joseph Grimaldi (1778-1837). Born in London, Grimaldi gave clowns the nickname of “Joey.” His character, “Clown,” was a mischievous and malevolent trickster.
Isaac Van Amburgh (1808-1865), a New Yorker, was the greatest animal trainer of his day. He entered a cage of lions and tigers dressed as a Roman gladiator and was said to have been the first man who put his head in a lion’s mouth.
The period of 1870-1938 is considered the Golden Age of the American Circus. It reached the greatest size under a tent and it capitalized on the Union Pacific Railroad and Central Pacific Railroad to move faster across the country.
Traveling up to 15,000 miles and performing in 150 towns, the show needed 1,300 workers and artists, 800 animals, equipment, human food for 3,900 meals a day and grain, meat, and vegetables for all the animals in the menagerie. 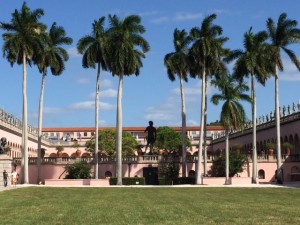