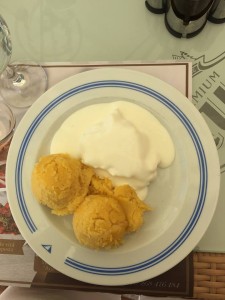 Mamaliga with sourcream
People have asked me why I never really enjoyed gourmet cooking nor was I interested in developing such talents beyond feeding my family an inexpensive meal. As a woman, mother, and wife, that is anathema to a failed human being. How can you not be interested in providing the most delicious, appealing, and nutritious meals for your family?
To understand where I come from, you must walk in the shoes of women and children under the communist regime where I grew up, women with children in tow who had to stand in line every day at an early age if they wanted to buy bread and basics. Moms sent their children to stand in the bread and milk lines, and they stood in the meat and fresh vegetable lines and canned veggies in winter. Fresh was a stretch even in summer time, we had to contend with wilted seasonal spinach, green beans, and peas and shriveled potatoes and apples. Meat meant choice cuts of fat attached to bones with which mom used to make soup. Refrigerators were rare and expensive and freezers did not exist for us, window sills doubled as such in winter time. Crows loved our storage system.
We ate well when grandpa dropped by and brought us a chicken, a pat of butter, and a quarter of a gallon of milk from his country “farm” where he raised rabbits, chicken, a sheep, a pig, and a cow. His farm consisted of a small barn and enough land to have a garden and space to grow some rows of corn.
The communist cooperative grew wheat and the crop was split among the villagers who toiled in the fields each day after the communist party received its demanded quota. It was almost like paying the mafia. After the communist party (the mafia) confiscated their lands for “the good of the people,” these former landowners had to work the land, put in the crop, harvest it, really backbreaking manual labor, and then pay the lion’s share to the land confiscator, the communist party. What a deal!
How can anyone be interested in fancy cooking when ingredients were impossible to find, when we lived from day to day on most basic foodstuff after we stood in endless lines daily?
Can spoiled Americans understand how it feels to enter a grocery store and see rows after rows of empty shelves? Can they imagine real lines for food extending sometimes for a mile, winding around the block and the entire neighborhood?
Can they imagine the fist and tug-of-war battles for a merchandise deal they see on Black Friday magnified to the point of exhaustion? If fat Americans give each other black eyes and bruises over a television set, an electronic game, or other silly gadget in order to save a few bucks while claiming that they are exploited, marginalized, poor, and downtrodden by non-existent “white privilege,” how would they react when faced with severe shortages of food and water? Unbelievably, the next day after they give thanks for what they already have, they pull each other’s hair out fighting for a TV that was probably cheaper a few days earlier.
Normally people fought for the five salamis hanging in the deli window, or a hundred bottles of cooking oil, or a few pallets of sugar and flour, that day’s delivery to the store. Even with rationing coupons, there was never enough food or necessities because planning was centralized, not based on free market supply and demand, it was based on five-year plans crafted and decided by uneducated communist bureaucrats who had no idea what they were doing nor did they care as long as they had their own grocery stores, department stores, doctors, clinics, pharmacies, and hospitals.
It was a privilege to find some food with shorter lines around Christmas time when the communist government supplied more pallets to grocery stores in order to pacify the stupid masses and to continue the real exploitation of the proletariat by the elites who pretended to be taking care of them, to be shielding them from the “evil” capitalists.
We were thin from lack of food, but we were not healthy. Pharmacy shelves were empty too, even vitamins and cotton balls were hard to find. There was a thriving black market at ten times the price that most people could not afford on the government-dictated meager salaries. Equality was painful, miserable, and stomach growling and churning.
I am hearing this tune again from bratty liberal kids who demand social justice and equality. P.J. O’Rourke called them “spoiled, miserable, unsatisfied, demanding, ill-disciplined, despotic, and useless.” Somehow, in an alternate universe, these “sniveling brats” blame capitalism for the generational welfare that fat and comparatively well-off Americans accept and demand from the Democrat Party that keeps them “poor.” Personal responsibility is an alien concept to most who are accustomed to being taken care off by taxpayers’ generosity.
Poverty is a relative term and most people ill-define or misunderstand poverty. According to the World Bank, almost 600 million citizens of the globe make less than $2 a day. Are you poor compared to them?
When people tell me how rewarding it is to cook fancy meals for their families, I just see spoiled individuals who have so much to be thankful for but have no idea how lucky they are to be given so many choices by a free market system promoted by capitalism, not by the socialist egalitarian non-sense.
Americans don’t understand the concept of the starving goose of socialism who was kept pacified and faithful by feeding her one kernel a day, just enough to prevent starvation. This way, she always knew who her masters were and was kept under control, no leash necessary, just a barbed wired fence to keep geese from escaping.

One thought on “Cooking Was Not Fun Because It Was Survival”