Despite the snowy conditions in Washington, D.C., the U.S. Holocaust Memorial Museum held a program on International Holocaust Remembrance Day, January 27, 2016 on the topic of “Combating Hate in Europe.” http://www.ushmm.org/online/watch/index.html
In advertising the forum, the museum explained the importance of such a program.
“Around the world, antisemitism, religious persecution, and violent extremism are on the rise, and each threatens the stability and freedoms that democratic leaders are working to preserve.”

The Museum’s intent was to examine how the lessons of the Holocaust could help “combat extremism and also stand up to antisemitism and violence against religious minorities.”

Ambassadors were to address what can be done to confront these challenges today, “what their governments are doing and still need to do to educate young people, counter hate speech, and create economic opportunity while also maintaining secure borders and offering safe harbor to refugees.” 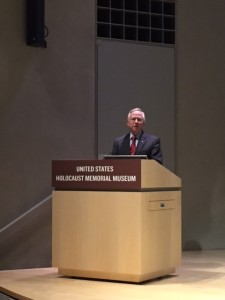 In her opening remarks, the museum representative described the day as a “day for education and reflection,” keeping in mind the social unrest in Europe, the fear on the ground, the resentment, xenophobia, hate speech, vicious, sexual attacks, and the treacherous slide into the worst extremism, the rise of terror groups and of government leaders who engage in hate speech. She described the rise of radical groups in Poland, “which are bolder and stronger than ever,” and the “anti-immigrant, anti-Muslim, anti-Jewish, anti-NATO, anti-Europe feelings, “the unbridled threats and actions against minorities; the anti-s have taken over the global discourse.”

Fred Hiatt remarked that America spoke with “moral arrogance” about Europe but “nobody is in a position to lecture anybody else when we are talking about these topics.” He mentioned how dismayed many were at the level of intolerance in parts of our presidential debates, “the ease with which other human beings were dehumanized.”

Peter Wettig explained that his country, Germany, has a moral responsibility to never forget the Holocaust, and that shapes its foreign policy, especially towards Israel. Anti-Semitism is not tolerated – “my country has strict laws on incitement, on hate speech, and on Holocaust denial which are punishable under the law, under the full force of the law.”
Those who decide what constitutes hate speech are lawyers and judges, an obviously subjective decision. One of the panelists explained that, in order to be hate speech, it must “incite” violence. I thought violence in general is caused by hate, an “intense and passionate dislike” of something or someone, by revenge, or insanity.

What is then “hate speech” as determined by progressive scholars. There is a legal and a dictionary definition.

“In law, hate speech is any speech, gesture or conduct, writing, or display which is forbidden because it may incite violence or prejudicial action against or by a protected individual or group, or because it disparages or intimidates a protected individual or group.”
In the dictionary, it is “speech that attacks, threatens, or insults a person or group on the basis of national origin, ethnicity, color, religion, gender, gender identity, sexual orientation, or disability.”

By this definition, most Democrats should be fined for “hate speech” and inciting riots and violence. But we do have freedom of speech, particularly unpleasant and offensive speech.

The audience expected the forum to address “the growing concern of most of Europe and many here in this country of the virulent spread of hatred meted out by the growing Muslim population in their host countries.” Instead, “the general position taken was that the rest of us aren’t tolerant enough of their customs and religious ideas.”

According to Chriss Rainey, “the discussion was presented in a panel of like-minded socialists who represented their socialist governments. I don’t think anyone has the answers yet for the Muslim infiltration of Europe and the western world, but to think we can do nothing but increase tolerance is irrational.”

Rainey continued, “Did it ever occur to anyone that the repeated mention of Republican candidates running for office, Trump in particular, was offensive and bordering on hate speech? Or is it only acceptable to speak your mind and express your sincere beliefs if you are Democrat or a socialist?”

The German ambassador Wittig expressed his country’s position of respect for Jewish groups, for Israel’s right to exist, and his country’s stance of intolerance towards any form of anti-Semitism. He almost foolishly insisted that anti-Semitism, “if it existed, was a German problem and not a threat from the million Muslims they have invited and allowed into the country.”

An interesting word used by several people on the panel raised my radar, “stakeholders,” a word that points to the one world governance socialist-speak coming from the United Nations.

Ambassador Gerard Araud focused his remarks on the French secularist society which “has just opened its doors to a very religious body of immigrants who do not share a common morality with host countries.” Reeducating and training the immigrants to the French way of life was presented in such a positive light as if it was remotely possible. Never mind the two massacres in Paris in 2015; that must have been just an exception to the peacefulness and good intent of the new comers to build a progressive life in France.

Chriss Rainey believes that “Araud’s remarks reflect an attitude that they don’t like religion because it puts barriers on human progress. They have ideas of right and wrong and anyone will be trained in the proper conduct of a citizen. The French expect to do this not through any religious body, which has been the source of morality for centuries, but from within state run schools that are set up to mold the next generation, outside the loving eye of home and family. But then, how could it be otherwise since they have basically destroyed the family already and the only thing left to train children—what few of them there are, is the state.”

Ambassador David O’Sullivan, representing EU, a house of cards threatened by the possible exit of Greece and U.K., explained his organization’s interest in controlling the 28 member-states to make sure they stay in line and preserve the EU. To succeed, EU bureaucrats must make sure any nationalist idea is rejected as dangerous, racist, hateful, xenophobic, backwards, and simple-minded. Anyone who opposes global government control is uneducated.

O’Sullivan expressed his disdain for Donald Trump, a presidential candidate who loves his country and speaks openly about protecting Americans’ rights to preserve their way of life. Ambassador O’Sullivan added that he had faith in the American voters to do the right thing, meaning, to vote for some other candidate who shares his progressive, globalist control views.

During the panel discussion and Q&A, the bashing of Donald Trump was almost a lait-motif. Trump voters were derided as “nativists,” “lower class” and “uneducated” for considering a vote for such a persona-non-grata whom the Labor Party in the U.K. contemplated banning. The two remaining ambassadors expressed their faith in the American voters that they would do the right thing and vote as the elites and the media desire.

As Chriss Rainey so aptly put it, “Could it be that the remarks about our conservative candidates that we heard mentioned again and again, are merely a reflection of their own fear of a growing conservative movement in Europe?”

After the conclusion of the panel discussion and Q & A, a Dutch survivor of the Holocaust, Dr. Alfred Münzer, made brief remarks about how he survived “the fury of anti-Semitism that had engulfed Europe,” having been hidden and protected “by a Dutch family and their Muslim housekeeper.” But his older sisters, 6 and 8 years old, did not survive. They were turned in to the authorities and taken to Auschwitz. “The father of a Catholic family whose wife had taken them in did not like Jewish children.” Sadly, he explained, the murder of six million Jews did not end the anti-Semitism that is very much alive today.

I was surprised that not once the real culprits of anti-Semitism and perpetrators of heinous crimes today were not mentioned. Yet every panelist and the moderator repeated ad nauseam the idea that somehow, conservatives and nationalists in Europe and around the globe who disagree with progressive goals and ideals are “far right loons” who deserve derision, contempt, and legal punishment of hate crimes.

Freedom of speech must fall under progressive censorship law; eager judges should eliminate the right to speak and think which is divergent from the ruling elites. Working hand in glove with social media, especially Facebook, these European bureaucrats and Democrats want to nip in the bud any resistance against their speech dictates.

Unlike Europe, which is a basket case of linguistic Tower of Babel, of broke socialist states thanks to their open borders, multi-culturalism and diversity at all costs, most Americans like their borders, their sovereignty, and their culture, and would like to keep it this way.

Americans do not want to lose their national identity to hostile, invading cultures that do not wish to assimilate but desire to change the demographics of the host country, its history, and replace the local customs and religions with Islam. It seems that the ruling progressives and invading Islamists, who rape and pillage across Europe, make strange bed fellows. The media and the socialist authorities are on high alert to hide the chaos.

The panelists spent more time protecting minorities that actually engage in hate speech, incitement, and murder, while condemning the “hate speech” coming from the “far right” fringe and those so intolerant and disagreeable with the progressive open border, destroy western civilization agenda.

No mention was made of all the violence, chaos, and rapes committed by the military age Muslim refugees harbored in ever-increasing numbers and welcomed with open arms by EU leaders determined to change the arrogant and intolerant face and demographics of our western civilization.

Unfortunately, thanks to progressive tyrants, career politicians in Washington who only represent the interests of their capitalist cronies, billionaires, and non-governmental organizations (NGOs) lobbying around the world with coffers full of grant money, the fix is in for European style global socialism.

*Antisemitism in Germany. Ahead of International Holocaust Remembrance Day, German Chancellor Angela Merkel said that antisemitism is “more widespread than we imagine.” http://www.jta.org/2016/01/24/news-opinion/world/merkel-anti-semitism-in-germany-more-widespread-than-we-can-imagine?utm_source=Newsletter+subscribers&utm_campaign=e4d5d21674-Daily_Briefing_1_25_2016&utm_medium=email&utm_term=0_2dce5bc6f8-e4d5d21674-25299385

*Holocaust Remembrance events in Paris. To mark the global Day of Remembrance, the Museum and UNESCO Paris will co-host a series of events and open an important exhibition on propaganda, called State of Deception.
https://www.project-syndicate.org/commentary/oppose-new-propaganda-of-hatred-by-irina-bokova-and-sara-bloomfield-2016-01