“Truth is sleepwalking with a hole in its head.” – Mircea Brenciu 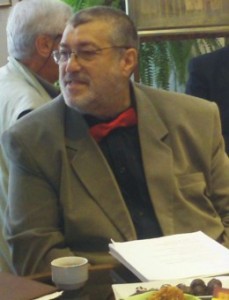 Mircea Brenciu Photo: Wikipedia
I met Mircea Brenciu on a sunny day in May 2015 in the downtown park as he was delivering a speech in Brasov on Heroes Day. The background of the rally was a huge cross erected in the memory of those who lost their lives during the Revolution of December 1989, when dozens of people were shot in the anti-communist revolution. Some of those young people were buried not far behind the cross.
I don’t believe in coincidence – there is a higher purpose for this seemingly chance encounter on such an important day in Romania’s history.
I interviewed Brenciu that day and again, more recently, across cyber space. Mircea Brenciu, born and raised in Brasov, educated in Economics and mass communication, is a writer, poet, founder, co-founder, and editor of many publications and organizations, including the prestigious Journalism Society of Romania, author of many books and recipient of numerous local and national awards. He comes from a family of scholars with a long history of anti-communist activity. He and Mircea Sevaciuc proclaimed November 15 the Anti-Communism Fight Day.
My theory is that a “fundamental transformation” is currently sweeping the globe and this massive change is not necessarily in the best interest of the citizens of various countries nor desired or initiated by them.
I asked Brenciu about the political power in Romania. Those currently in power and the opposition form a “common front” against the executive, the president and the prime minister, he wrote. Even though there are numerous political parties, they have no real power, he said, they make up a “decorative Parliament” reminiscent of the Stalinist era, easily recognized by those who were unfortunate enough to have lived in that dark period of history and who do not belong to the “Facebook generation.” Brenciu calls this type of political power, “artisan politics.”
The majority of the members of Parliament are just voting machines, Brenciu said, with salaries and inflated official bonuses much higher than what the average citizen earns. There are a few among them who have amassed huge fortunes, taking advantage of the traffic of influence among those who have the power to make decisions, who received bribes in exchange for rubber stamp approvals, for faux public auctions, and even for political and judiciary decisions.
Using a hyperbole to describe the corruption, Brenciu believes that the majority in this category of influence trafficking belonged to the former President Basescu regime. He was “a retired sailor who reached Romania’s deck with the goal of transforming it into a pirate ship.” The Romanian people were and are still taking all the risks while floating on this boat called country that is taking on water really fast.
“Our government is named by Brussels through the strange intervention of President Johannis, resulting in a total loss of state sovereignty. The government answers to Brussels. I spoke about the dissolution of Romania in my book, Cardinal Dialogues, Brenciu said. One of my interlocutors, Ilie Serbanescu, a political and economic analyst, had introduced for the first time the idea that Romania had become a colony.
The technocrats have enabled this colonization which took place under the pretext of eliminating corruption and moving the country towards a European way. Hired by various non-profits, non-governmental organizations (NGOs) and financed by the ‘generous and dispassionate’ George Soros, the technocrats were principal enablers.” Brenciu wondered why Soros was connected to the interests of the Old Continent. Soros seems to be interested in many continents but particularly North America and Europe.
I asked Brenciu who elects such corrupt members of Parliament and if there is a connection to the former communists who went underground, disappeared, or died during or shortly after the tyrannical couple, the Ceausescus, were executed on Christmas Day 1989.
The crypto-communist period of the children of former Securitate members and communist apparatchiks has somewhat passed in great measure by biology; those were mostly present during the regimes of Ion Iliescu and Emil Constantinescu who ruled following the 1989 Revolution.
Crypto-communists secretly sympathize with communism or are secretly members of the Communist party if the communist party is allowed to exist. In the U.S., crypto-communists have come out of the shadows and engage in overt anti-American activities, demonstrations, civil disobedience, and destruction of property without any fear of prosecution or retribution. There are ample examples where communist minority groups funded by Soros have burned, looted, and pillaged businesses in several towns and neighborhoods while the police watched.
But there is a more nefarious group at play in Romania called “intellectuals,” added Brenciu, with Masters and Doctorates purchased with cash in dubious subjects such as political and military strategy, former and current officers, faux journalists who shape the political opinion with their inaccurate reporting by deriding and annihilating patriotism, faith, and hope in a nationalistic future. These manipulators, whether they are found in politics, justice, business, mass-media, or in pseudo-cultural circles, are the actual millionaires and billionaires who are sinking Romania into the abyss of the Mariana Trench, to use another maritime hyperbole, said Brenciu.
Brenciu concluded that talented, honest, and sincere opinion makers who are not financially motivated or bribed are usually marginalized, eliminated, and compromised. “Truth is sleepwalking with a hole in its head.”
The one world government elites with the help of non-governmental organizations (NGOs) and European Union (EU) are busy incorporating and bringing in line as many countries as possible under their global communism umbrella.
TO BE CONTINUED