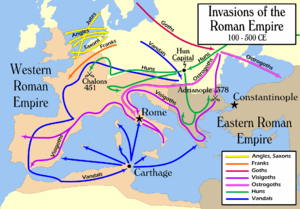 Photo: Wikipedia
After the fall of the Western Roman Empire in 476 A.D., Europe has been besieged by waves of invasion from tribes of peoples such as Goths, Ostrogoths, Visigoths, Vandals, Angles, Saxons, Lombards, Suebi, Frisii, Jutes, Franks, Huns, Cumans, Avars, Bulgars, Alans, Moors, Mongolians, Khazars, Tatars, Vikings, Normans, to name a few, who brought war and pillage across Europe from 376 to 800 A.D.
These attacks were followed by the bloody incursions and invasions of the Ottoman Empire in various European countries for several centuries in their quest to establish the sought-after Caliphate. The Crusades were the logical Christian reaction to defend their faith, territories, and way of life.
Romanians fought against and pushed back the Turks and their rule for centuries and eventually paid tribute in gold and lost lives to the Ottoman Empire. The most prominent defender of Romanian territory against the Ottoman invasion was the famous Vlad Tepes.
French and Italian scholars viewed this part of history as catastrophic; it followed the destruction of the great Roman civilization which was replaced in the West with a period they termed the “Dark Ages” because it “set Europe back a millennium.” German and English scholars saw this invasion as replacing the “tired, effete, and decadent Mediterranean civilization with a more virile, martial, Nordic one.” German and Slavic historians used the term ‘migration.’ (Halsall, Guy (2006), “The Barbarian invasions”, in Fouracre, Paul, The New Cambridge Medieval History, Vol. 1: c. 500 – c. 700, Cambridge University Press, ISBN 0-521-36291-1)
This brings us to the current orchestrated mass invasion of Muslim “refugees” across the senescent continent of Europe which needs an infusion of new and virile blood from the Middle East and north Africa. These single young men of military age are quite willing to install the promised Caliphate across Europe and are not shy in their overt (but media-covered) effort to rape, pillage, and destroy across civilized society.
Secular Europe has a problem with continuing to exist by not having enough babies and is committing willful demographic suicide sped up by the politics of the European Union technocrats who are eager to have global governance under the U.N. umbrella.
It seems that one Romanian young man, Ionuț Sabău, has what it takes to defend his country, his family, and his way of life from the Muslim “refugee” social engineering plan. Non-governmental organizations have been preparing this flood of male humanity (if we can be so kind to men who behave like savages) with money from billionaire donors and socialist governments interested in changing the demographic face of old Europe.
Bill Still reported that “In early January, 28 year-old Ionuț Sabău found out that the Association Freres Romania (an NGO), in partnership with the Ministry for Internal Affairs was planning to make a ‘refugee’ center in the neighborhood of the small town of Ardud, in Satu Mare county.” https://www.youtube.com/watch?v=LcMcFmNdFvA
Ionuț Sabău, who had worked and lived in Paris in a prominently Muslim neighborhood, gathered 200 signatures and petitioned the local government to stop the planned settlement; the mayor set up a meeting with the prefect, the representative of the local government.
Ionuț Sabău told the prefect bluntly that he does not agree with this migration in any shape or form based on the simple fact that he wants his family safe from harm; he wants his children to be able to go to school and his wife and children to walk the streets alone safely. This is a small village (5,000 inhabitants) where children are not bussed to school, they walk.
“We don’t care what the law says or what the state says, we do not agree. We are disposed to use violence and we want everyone to know that.” The prefect responded, “Please don’t talk about doing justice yourself. There are institutions for that.” Sabău rejoined, “I understand, but our children must also grow up in safe and optimal conditions and we don’t want a situation like in Western Europe where people are afraid to let children go to school alone or leave our wives alone in the streets. We don’t want any of that here! Under no circumstance! This is not an issue of defending the Romanian state as a whole, we are simply defending our own families.” https://www.youtube.com/watch?feature=player_embedded&v=5cw-8OT-EWc#t=116
Following the hearing, the Freres Romania Association, an NGO, canceled the project of resettling the Muslim refugees in a Christian country and culture that is totally alien to the Islamic faith and theocratic culture. http://breizatao.com/2016/02/03/roumanie-des-villageois-salues-en-heros-pour-setre-revoltes-contre-un-plan-secret-de-lue-visant-a-installer-des-migrants/
If only the men in the EU countries that have already been invaded and their lives violently disrupted would get half of this man’s courage!
Leaving aside the facts of who caused the Arab Spring and who financed this massive invasion, true war refugees can best be helped in countries that share their own culture and faith and provide safe-haven for their families. If these people are bona fide war refugees, young men of military age should stay in their home-countries and fight the enemy instead of fleeing like cowards and leaving women, children, and old people behind to suffer.