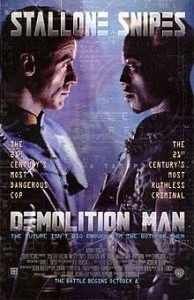 Known by his moniker, “Demolition Man,” Spartan destroys buildings in an effort to catch criminals. One such criminal is Simon Phoenix (Wesley Snipes) and his gang whose capture eventually puts the innocent Sgt. Spartan in jail for having gone into a building without his superiors’ orders in order to free 30 hostages. When the building explodes and collapses, the handiwork of Phoenix, who wired it with explosives, all innocents are killed.

Arrested for involuntary manslaughter, Sgt. Spartan is incarcerated in a cryo-prison that keeps inmates frozen in suspended animation. It is not the bizarre punishment that is so shocking but how society changes after a devastating earthquake merges the cities of San Diego, Los Angeles, and Santa Barbara into a strange utopia, not unlike that dreamed by progressive liberals, a dystopia in which police officers have no idea how to deal with criminals, living in a cult-like, namby-pamby existence in which cursing or using certain “verboten” bad words is punished by robots located everywhere who issue tickets each time, punishing the offenders with fines of no salt, spices, food, and other life-enhancing pleasures that humans take for granted.

The fascist government controls everyone’s life to such a degree that they must be issued permits to reproduce and their sexual life is reduced to a virtual reality experience, without touching, without the “icky exchange of bodily fluids,” and with in-vitro fertilization.

While in cryo-stasis, Phoenix, now released by the corrupt Dr. Raymond Cocteau to kill Edgar Friendly, the underground leader of free people who are giving him fits with their existence, Phoenix is given computer-hacking skills and paramilitary training.

The problem is that now cars drive themselves and actual weapons are stored in a dusty museum, no longer used for defense where such weapons are forbidden and thus unnecessary as the fascist state controls everything except the small underground resistance called “the Scraps,” homeless people and citizens marginalized by the fascist society, periodically raiding the surface for food.

Life is tightly controlled by security cameras everywhere and nobody can escape the long-arm and all-Seeing Eye of the government. The plot has many one-liners and funny moments such as the existence of only restaurants approved by the government, Taco Bells, the only survivor of the “monopoly wars of the 20th century,” and the police woman named Lenina (Sandra Bullock).

Lenin would be so proud.

Eventually Cocteau, the fascist dictator, is killed; the utopian and tightly-controlled bizarre city is thrown into disarray and into an uncertain chaotic future.