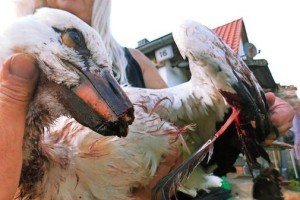 Photo courtesy of Mark Duchamp,
President, Save the Eagles International
I saw the once verdant wheat fields of Eastern Europe covered with ugly wind turbines, slowly spinning their huge blades into the wind. A few funnel dust swirls were blowing the topsoil into the air. They did not appear to be connected to any storage station that would distribute the electrical power generated. I searched and found out that they were really not connected to any network, were not generating usable electricity, they were all for show to placate the “green growth” European bureaucrats.
Turbines kill birds on a large scale around the world and disturb humans and wildlife. According to Save the Eagles International, “contrary to what we are told, wind farms will cause the extinction of many bird and bat species.”
Large birds are naturally attracted to tall structures. I’ve seen stork nests on top of power line poles. A pair of ospreys built a nest on the nacelle of an abandoned wind turbine in Cape Vincent, New York, as reported on June 2, 2016 by Mark Duchamp, President of Save the Eagles International. An osprey was hit by a turbine blade in Scotland and had to be euthanized. http://canadafreepress.com/article/another-osprey-killed-by-a-wind-turbine-in-scotland
The World Council for Nature reported that “a few wind farms in Germany have been loosely monitored for bird and bat mortality and the government has disclosed a number of carcasses: 69 eagles, 186 kites, 192 buzzards, 13 harriers, 59 falcons, 12 hawks, 7 ospreys, plus hundreds more birds of all sizes and even more bats.”
“These figures are just a small sample of the ongoing massacre, driving many rare species into extinction,” said Duchamp. He cited Ubbo Mammen, “an ornithologist commissioned by the German government, who estimated that 200-300 Red Kites are being killed yearly by wind turbines in Germany.”
Duchamp believed that the 29 sperm whales that were stranded and died between January 9 and February 4, 2016 on German, English, and Dutch beaches may have been killed by the operation of offshore wind turbines. The environmentalists’ explanations seemed to ignore, Duchamp said, the “most obvious and likely one – offshore wind farms.”
Angie and Uwe Löblich of the wildlife center in Struck encountered a white stork with a chopped off beak so gruesome that it had to be put to sleep. The injury was likely caused by a spinning wind blade. http://www.maz-online.de/Lokales/Prignitz/Storchenschnabel-von-Windrad-abgeschlagen#
Other cranes and large birds are chopped up when they fly into wind turbines and even power lines. http://www.gegenwind-vogelsberg.de/kranich-stirbt-durch-rotorblatt-einer-wka-in-helpershain/
Mark Duchamp wrote that “in Spain alone, wind turbines kill 6 to 18 million birds and bats a year.” http://canadafreepress.com/article/birds-and-wind-farms
Wind projects in southern Ontario dot the lake shores, the very shores which millions of birds flock to during migration. Duchamp added that Michigan had wisely imposed a 3 mile buffer zone between wind turbines and Lake Huron. http://ontario-wind-turbines.org/
Save the Eagles International explained in 2014 that avian radar and cameras are only 7 percent effective in daytime and work up to 150 meters away, dropping effectiveness in half at a distance of 300 meters. This means that bats, migrating songbirds, and owls which travel at night have no warning and are thus killed by millions. Bats are attracted by insects that swarm around the wind turbines. http://savetheeaglesinternational.org/releases/mitigation-by-video-cameras.html
Arne Follestad et al studied how the 68 wind turbines in Smola, Norway affected the population of white-tailed sea eagles in the archipelago. https://www.wind-watch.org/documents/wind-power-and-birds-at-smola-norway-2003-2006/
Wind turbines and solar power panels chop in the spinning blades and fry in the mid-air heat flux millions of birds around the world, not to mention the physical and mental distress (Wind Turbine Syndrome) caused to mammals on land and in water in the proximity of wind and solar farms. http://savetheeaglesinternational.org/new/another-eagle-killed-gory-pictures.html
Environmentalists believe that the practice of issuing incidental take permits for wind farms is detrimental to all species of bats and birds and should be stopped. The assurance that turbines will be located on sites away from migratory flight paths is not sufficient to prevent bird deaths. Turbines still attract swallows, bats, and raptors from miles away. Endangered bird species are not spared either. As bird watchers spotted the fastest flying bird, the White-throated Needle tail , turn up in Britain, they witnessed in horror its flight into the path of a nearby wind turbine. https://www.wind-watch.org/news/2013/06/27/birdwatchers-see-rare-bird-killed-by-wind-turbine/
Mark Duchamp enumerated the many casualties of wind farms – 3,000 golden eagles in 25 years of operation at the Altamont Pass wind farm built on “the hills where golden eagles come from all over California to hunt and interact.” http://savetheeaglesinternational.org/
“White-tailed Sea Eagles are being killed by windfarms in Norway, Sweden, Germany, Japan, Scotland and the Netherlands; Bald Eagles in Canada; Golden eagles in the U.S., Sweden, Scotland, and Spain; Wedge-tailed Eagles and White-bellied Sea Eagles in Australia; eagles from five different species in Spain, all condemned to disappear because of the government’s green policy,” explained Duchamp.
“In Australia, the Tasmanian Wedge-tailed Eagle will become extinct because of a biased, faulty and misleading environmental study which permitted the construction of seven windfarms in its habitat.” www.iberica2000.org/Es/Articulo.asp?Id=4382
While millions of birds and bats are dying needlessly, wind and solar power inconsistent energy production cannot replace coal. The world’s economy needs fossil fuels, nuclear energy, and hydro-power that provide a constant source of electricity, not partial or intermittent Aeolian energy.

2 thoughts on “Wind Turbines Are Killing Birds and Bats”