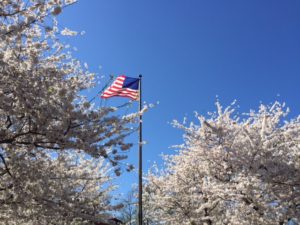 The American flag has been a symbol of pride, of hope, of freedom, of liberation, of exceptionalism, of courage, of inspiration, of strength, and of power. It pains me to see anti-American elements, the enemies of freedom, Islamists, communists, and other traitors burn it, trample it, tear it, trash it, and do unspeakable things to it.
Our Stars and Stripes must be properly folded, stored, and disposed of. Yet the Rhode Island Veterans cemetery where Stan Sniezyk’s father and other heroes are buried disposed of piles of torn and dirty American flags into the dumpster and kept them in storage shed. Photographs and even a video outraged patriotic Americans around the country. Stan Sniezyk posted photos of mounds of flags in “Call 12 for Action.” When interviewed, he told WPRI 12, “It just broke my heart because everyone in this cemetery fought under that banner and every fiber of that flag is their blood, sweat, and tears.”
U.S. flags must be stowed properly and prepared for proper disposal by burning. Rhode Island director of Veteran Affairs, Kasim Yarn, seemed shocked that procedures were not followed. http://americanmilitarynews.com/2016/06/video-piles-of-flags-dumped-at-veteran-cemetery-is-a-disgrace-is-causing-an-uproar/?utm_medium=facebook&utm_campaign=alt&utm_source=colddeadhands
Fortunately, grateful Europeans who were saved by American soldiers fighting on their behalf against fascism, honor, respect, and understand what the American flag means to them. As our country’s most powerful symbols of freedom, the flag was revered by those suffering under the Nazi boot and occupation during WWII. Just seeing the American flag flying proudly in the wind, those in dire straits gave a sigh of relief – the Americans were coming, hope and freedom were around the corner, and everything would be returned to God’s grace and mercy.
Sergeant Donald Hall helped free the Langenstein-Zwieberge German concentration camp in April 1945 as a member of the 83rd Infantry Division, known as the Thunderbolt Division. The camp was a working camp with a prisoner life-expectancy of six weeks. One of the prisoners he helped liberate found enough materials to make an American flag which he then gave to his rescuers. After the division left, Donald Hall kept the flag and brought it back with him to the U.S. where it was moved several times and eventually stored in an attic.
Understanding the significance of the flag, his daughter, Mary Kay Flege, contacted the U.S. Holocaust Museum. “We siblings – and there are 10 of us – came to understand that the flag must have been a painful reminder for dad of things he had seen at Langenstein and elsewhere in Europe – things that must have been unbelievably tragic and cruel and heartbreaking, certainly not the kind of thing that he could or ever share with his young children, much less other adults in civilian life.” https://jewishlouisville.org/american-flag-made-by-camp-inmates-for-liberators-goes-to-ushmm/
Donald Hall’s extended family, their spouses, ten children and grandchildren, gathered from around the country to participate in a moving signing ceremony, following the donation of this aged-flag, a significant piece of history, to the U.S. Holocaust Memorial Museum. https://engage.ushmm.org/2016-power-of-one-artifact.html?mkt_tok=eyJpIjoiWlRVM05XTXdOelZsWVdVMCIsInQiOiJjZytHdzJJWUZaWlBTelJHdlVUM0VWWnNlMnlXems0eUZcLzN5SEpSNCtLbzlZUzZZUHZ3bFBRZUN5RnJkZitJU3hKbnBVcTc1Z1U0dXBWSXpIOFlmaGx3WExWN2tEeXpxTmFFb0J6MTM4REE9In0%3D
July 4 is not about watching fireworks, eating hamburgers, hot dogs, and enjoying off time with your family. It is our Independence Day. You are where you are because courageous men before you made it possible, men that have been long forgotten or you’ve never met, read, or learned about.
On our Independence Day, remember and pray for all American patriots, American soldiers, and American heroes who sacrificed their freedoms and gave their lives as an ultimate gift of altruism so that people they never knew could live a better life, free from oppression, and could have the right to express their divergent opinions and liberties every day, however offensive those may be.