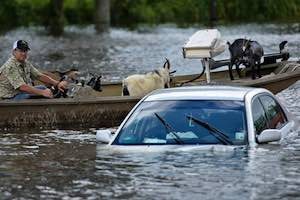 Photo: Wikipedia
The severe flooding in Louisiana, the result of torrential rain and the location of Baton Rouge 56 ft. above sea level, contributed to the destruction of 40,000 homes. More than 30,000 people and 1,000 pets had to be rescued.
The New York Times published a story immediately, “Flooding in the South Looks a Lot Like Climate Change,” blaming the flood on the global warming hoax created by the very profitable climate change industry.
Al Gore said, “These kinds of record downpours – that’s one of the manifestations of the climate crisis.” The community of Watson had a record 31.39 inches of rain during the downpour. http://fuelfix.com/blog/2016/08/16/al-gore-houston-louisiana-floods-exacerbated-by-climate-change/
Nicolas Loris points to two studies by climatologists Patrick Michaels and Paul Knappenberger that seem to contradict Al Gore and the New York Times. In the Daily Signal, Loris quoted Chip Knappenberger, “Lower Louisiana is a climatologically prime location for massive precipitation amounts.” http://dailysignal.com/2016/08/17/the-facts-show-louisianas-floods-not-caused-by-man-made-climate-change/?utm_source=TDS_Email&utm_medium=email&utm_campaign=MorningBell&mkt_tok=eyJpIjoiTWpkbU1tVmtZekZqT1RkaiIsInQiOiJPUysySWxTWEgxN082M1lORWV1UjZVcGRCRW9PTFZuUWlHUVlSazhqTEhwZE1pTUliNnRxMzFhaWpPSTNLMWNIWnNwc29BaDd1cnpyQm1HNjNrM2VtK0xFSXNFYmRIWGhaT1J4b1ZcL09sN0k9In0%3D
Patrick Michael’s and Chip Knappenberger’s paper reported, ”Our findings indicate that the climate variability of both the Atlantic and Pacific Oceans can exert a large control on the precipitation frequency and magnitude over the contiguous USA.” http://www.cato.org/blog/you-ought-have-look-natural-climate-variability
In a second paper, by a research team at NOAA/GFDL, Karin van der Wiel et al, who analyzed “climate model projections and observed trends in heavy precipitation events across the United States,” wrote, “Finally, the observed record and historical model experiments were used to investigate changes in the recent past. In part because of large intrinsic variability, no evidence was found for changes in extreme precipitation attributable to climate change in the available observed record.” http://journals.ametsoc.org/doi/abs/10.1175/JCLI-D-16-0307.1
Iman Malakpour and Gabrielle Villarini, researchers at the University of Iowa, wrote about their study, Analysis of changes in the magnitude, frequency, and seasonality of heavy precipitation over the contiguous USA, that “over the last 65 years, the stronger storms are not getting stronger, but a larger number of heavy precipitation events have been observed. The annual maximum precipitation and annual frequency of heavy precipitation reveal a marked seasonality over the contiguous USA.” http://link.springer.com/article/10.1007/s00704-016-1881-z
Knappenberger mentioned the NOAA study of June 1978 when the main stream media focused then on the next ice age and global cooling, not global warming. The 100-page document described the various levels of tropical storm precipitation, moisture, and rainfall around the country. http://www.nws.noaa.gov/oh/hdsc/PMP_documents/HMR51.pdf
Even the United Nation’s Intergovernmental Panel on Climate Change (IPCC) reported, “In summary, there continues to be a lack of evidence and thus low confidence regarding the sign of trend in the magnitude and/or frequency of floods on a global scale.” http://www.climatechange2013.org/images/report/WG1AR5_Chapter02_FINAL.pdf
But before Al Gore’s global warming movie and the profitable global climate change industry, there was the flood of August 18, 1931, when the Yangtze River peaked and killed 3.7 million people “directly and indirectly over the next several months,” as reported by the History Channel in 2009.
In April 1931 China the rainfall was above average. Torrential rains in July exacerbated the previous conditions and the Yangtze River flooded a 500-square mile area. Waters continued to rise in August as more rain fell and flooded the rice fields, destroying the crop. The population of the adjoining cities who depended on the rice crop starved to death or died from typhoid and dysentery from the polluted river, “perhaps the worst natural disaster of the 20th century.”
This Chinese region is densely populated and thus people depend on the Yangtze River for water for personal and farming needs. Millions died from starvation and disease simply because flood-control measures were not enforced. The Yangtze River “carries large amount of sediment, which accumulates in certain areas of the river and must be cleared regularly, However, with much of the area’s resources devoted to civil war at the time, the river was neglected.” http://www.history.com/this-day-in-history/yangtze-river-peaks-in-china
The facts that natural disasters occur for reasons other than global warming, such as oceanic currents and underwater volcanic eruptions, are inconvenient details for the environmental/green growth agenda.