“Socialism is a philosophy of failure, the creed of ignorance, the gospel of envy, its inherent virtue is the equal sharing of misery.” – Winston Churchill 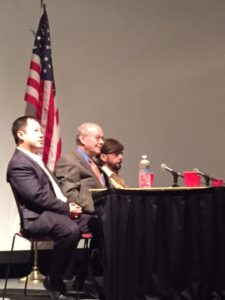 The political dissidents sent there who worked underground in the gold mines had a survival rate of 2-4 weeks. He described the horrific and constant cold, the back-breaking labor on two rations of bread per day, the size of a person’s fist, and watery soup. The bitter cold, the unsafe working conditions, and the hard labor killed so many that the estimate of those buried in the permafrost is at least 3 million. Nobody could keep accurate count, he said, because records were constantly scrubbed. The gulags were the “the ultimate legacy of the communist experiment.” The worst of the re-education camps in the Arctic region was Kolyma, the place with two seasons, “12 months of winter and summer,” the Arctic death camps which served as a model for Hitler’s concentration camps.

Martyniuk expressed his disappointment that Americans know so very little about gulags and the mass killings that occurred during the Bolshevik and Soviet purges. How could 25,000 Bolsheviks control 25 million people? They confiscated their guns first.

Martyniuk explained that socialist ideas continue to live on in America because:
– “institutions of higher learning promote socialist thinking”
– “communism has never been fully discredited,”
– “revisionist historians avoid black deeds of communism,”
– Marxist professors continue to say that “the idea was noble”

Martyniuk identified disturbing trends in our society that are similar to those that led to communism and tyranny in the former Soviet Union:
– Gradual loss of free speech
– Restrictions on the right to bear arms
– Expansion of the police state
– Promotion of collectivist thinking
– Disparaging individualism
– Denigration of liberty and religion
– Authoritarian method of governance through expansion of centralized bureaucracy, “governing wars,” inciting class warfare, denigrating free markets, i.e., “Free markets have never worked”
– Centralization of government
– Loss of faith in free-market capitalism due to crony capitalism
– Redistribution of wealth and promotion of “class warfare” based on race and ethnicity

Martyniuk spoke of authoritarian regimes that first remove weapons from the hands of the people and how important it is to guard our Second Amendment. He gave examples of the 1932-1933 Ukrainian famine-genocide called Holomodor, and Germany and Austria’s gun confiscations in the 1930s.

He pointed out that the most egregious was the restriction of First Amendment free speech through the doctrine of political correctness, a type of Orwellian “1984 thought control.” PC guidelines are now everywhere in universities and colleges around the country. “European speech codes led to arrests and persecutions of high-profile individuals.” Noted were Leonid Plyushch (The Case of Leonid Plyushch) and Juan Williams in the U.S., both of whom were deemed as two men in “need of psychiatric help for speaking the truth.” https://www.amazon.com/Leonid-Plyushch-Tatiana-Sergeevna-Khodorovich/dp/0891586008

Nhan Lam’s parents fled Vietnam before he was born, surviving navigational errors and being robbed by pirates six times. When they made safe shore, they were sponsored by a Lutheran church in the U.S., and his family arrived in Buffalo in 1979 where his educated father worked part-time as a janitor. Even though his family was very poor at first, they eventually prospered through hard work.

Nhan Lam became an aerospace engineer and reached his American Dream through untiring effort and entrepreneurship. He now runs several real estate companies. He admits being a liberal in his teens but later becoming a conservative once reality hit him. He never forgot the lessons about Vietnam from his father. “Never settle with being good, when your potential is to be great. Never settle for another’s opinion, when you have the ability to think for yourself.”

One hundred million victims of communism, including my Dad, disagreed with the Communist Party Marxist ideology and protested the confiscation of their homes, land, guns, personal possessions, and the loss of their God-given freedom. They bitterly complained about the lack of food, heat, water, proper medical care, medications, and a decent treatment as human beings.
Will young Americans today who are turning a blind eye and a deaf ear to reality eventually repeat the fate of millions who fell for the “pie in the sky” promise of communist utopia?

3 thoughts on “Survivors of Communism Speak at George Mason University”