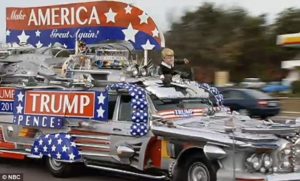 Photo credit: NBC
The Trump Mobile made by Finnish couple in Florida from many car parts
The sun rose today, January 20, 2017, on a cloudy and rainy day but I was dancing of joy inside. I cried and felt as if a heavy burden was lifted off my chest, the crumbling stone of anti-Americanism and communism.
There is a new Sheriff in town and he loves our country. He is glowing, almost giddy with pride and bliss, knowing that he is going to lead our nation and, indirectly the world, on the right path of economic success.
President Trump will begin to put back together the scattered pieces of the fine-tuned watch called America that the previous occupant of the White House had dismantled piece by piece, never knowing how or having any desire to put it back together again. The more mayhem he created, the happier he seemed to be. His legacy will live in infamy. History will not be kind to President Barack Hussein Obama.
I have devoted the last eight years of my life to explain publicly and to write pro bono about the specter and evils of communism that was encroaching our country and the American spirit every day. The fact that this man from Hawaii was able to get away with so much without a whimper from the American people who had been duped into voting twice for the man with the golden and mesmerizing voice, the man who criticized our country non-stop to our friends and enemies alike, to anybody who was willing to listen, spoke volumes about the targeted transformation of the American psyche.
We must now reverse that brainwashing. Whether the hearts and minds of the American people can be put back in their proper place through accurate American education, history and civics, remains to be seen. The globalists, schools, hateful and communist Hollywood, and the socialist main stream media have successfully shaped and created millions of global citizens in the United States, and billions around the world, who behave like selfish Snowflakes and welfare-dependent drones, people without a conscience.
I cried yesterday of joy and relief; a feeling of elation and completion filled my heart and soul. The communist and anti-American fog that had darkened our nation every day for the last eight years has lifted. The hateful and fearmongering fog that brought out the worst elements in our society has lifted. We must now scrub the thick mud and filth from the ranks of our corrupt and putridly-engorged government.
People seemed happier and kinder all around me; there was an air of excitement everywhere. Bikers arrived by the thousands in a thunderous cortege; people were displaying bumper stickers and American flags without fear of retribution, fear of being beaten up or their property destroyed. Bikers were wearing helmets and leather with symbols of patriotism, our flag, our bald eagle, second amendment signs, among a sea of red, white, and blue.
President Trump and Vice President Pence placed a wreath at the Tomb of the Unknown Soldier. They saluted our servicemen correctly, with respect and pride for those who guard the tomb and for those unknown soldiers who gave their lives for this country and for others around the globe. President Trump will be a respected Commander-in-Chief and a leader of our armed forces that our enemies will fear and revere.
With his beautiful American family in tow, President Trump paid homage to God, country, police, and our military. God is smiling from above that his kingdom of faithful who outnumber the domestic enemies of America will worship again without fear of retribution, ridicule, and shame for their beliefs.
It is a great day in America today! There is an American Sheriff in Town who loves our country. President Trump will lead us with grace and competence into higher levels of success and will unite again our wounded and divided spirit into one people, the American people, who are not ashamed of who we are, of our history, and who respect our forefathers who gave us our Constitution.
President Donald J. Trump, the 45th president of the United States, will reinstate and preserve our American Exceptionalism and our leading role in the world.
President Donald J. Trump is a man of God who honors who we are, our exceptionalism, our Christianity, and our vital role in leading and making the world a better place for everybody.
President Trump has Congress, a pen, and his Twitter account. Let’s hope and pray that he will use them wisely, for the benefit of all Americans, and that Congress and their lobbyists will not oppose him at every turn.