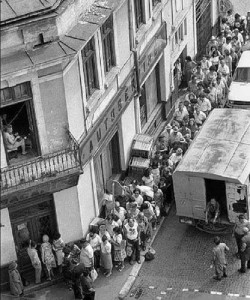 Photo: Octavian Paul Draja
If you are trying to escape from your country and they shoot you in the back, that’s not a nation, it’s a prison. Nobody would risk it all if life was good and happy. No Cuban would get into a rickety boat or try to swim in shark-infested waters to the U.S. shores if life was so great in Cuba. People attempt to escape oppressive, tyrannical governments that keep their bodies and minds imprisoned in conditions that most Americans cannot fathom.
People escaped the communist Iron Curtain in many ingenious ways since the Bolsheviks closed borders to the West. They were not allowed to see how much better people lived under free market governments. Some would be defectors made it and some did not. They escaped by boat, U-Boat, hot air balloons, chair lifts, cars, small planes, crop dusters, swimming, crawling, hiding in the car engine compartment, hiding inside passenger seats, evading their guards at sports competitions abroad, digging tunnels under the border, and traveling with fake passports. The human ingenuity to escape oppression and to seek freedom is boundless.
Checkpoint Charlie Museum documents many escapes and fails, including the death of Peter Fechter who bled to death in front of the white border line and before the eyes of the entire world on August 17, 1962. He became the symbol of what is wrong with socialism and communism – the communist party government keeps people fenced in like a prison and, if they try to escape, they will meet a swift death. The Checkpoint Charlie Museum claims that 1,303 people were killed until 1989, trying to escape from the German Democratic Republic, a communist stronghold, to the Federal Republic of Germany.
Few stories of successful escapes are as complicated as Albani’s. I wrote the two-part account of his 1969 escape from communism and the return a year later to help his wife defect as well. Albani became a successful engineer who worked for years in New York. http://canadafreepress.com/article/albanis-escape-from-communism-and-his-free-life-in-america1
http://canadafreepress.com/article/albanis-escape-from-communism-and-his-free-life-in-america
I never understood why young liberals yearn for socialism with such passion when none of their activist “role models,” Hollywood types and political figures, is in a hurry to move to the paradise they advocate for the rest of the millennials who are gullible enough to believe them.
I did not see Bernie Sanders move to the socialist paradise he promoted during his campaign and still does. On the contrary, he is happy in Vermont, with his expensive cars and homes.
I never saw a Hollywood star or a public person, activist, community organizer, or politician seek medical treatment and surgery in Cuba, Venezuela, or North Korea. Michael Moore told us they had the best medical care in the world and it is free. What a deal!
Never mind that their hospital wards are decaying in a pathetic state of disrepair, neglected, dirty, with urine, feces, and caked on blood stains. Never mind that Venezuela, once a prosperous nation, after 18 years of Chavez’s and Maduro’s socialism, cannot even produce enough food, toilet paper, medicines, and gasoline for its people, even though it has one of the largest oil reserves in the world.
Venezuelan millennials demonstrate against the regime weekly, to no avail. Their parents believed the socialist lies and voted in the rapacious socialists who stole the country’s wealth and became billionaires at the expense of the hapless poor to whom they threw a few freebies now and then as pacifying bones. As the regime keeps printing money without the backing of goods and services, the inflation rate in Venezuela has already skyrocketed to 720 percent after so many years of socialist “paradise.”
Community organizers, agitators, and socialist apparatchiks are not very good at planning centralized economies successfully. They have failed everywhere they tried on their way to communism. They have the gift of gab, policing, theft, and oppression.
Who knew that standing in endless lines in hot or cold weather for food, medicine, toilet paper, and other essentials spoiled American leftists take for granted, makes us better humans and enrich our lives?
I am still waiting to see western citizens crossing the border illegally into North Korea or Cuba because socialism is so great and desirable. The few Americans who were dumb enough to visit North Korea and ask for political asylum are imprisoned there.
According to Petrisor Peiu, shortly after the communist regime took power in Romania, 1945-1960, the country lost, by historians’ account, most of the intellectual elites. Those who remained and/or survived were reintegrated (indoctrinated) into society with many restrictions to their freedoms. Communism destroyed the fabric of society to such an extent that recovery has been very slow. It is hard to erase decades of fear, indoctrination, and welfare dependency mentality.
After 2000, according to United Nations’ estimates, 3.5 million Romanians, 17 percent of the population, left for greener economic pastures. Since the integration into the EU in 2007, 14,000 doctors and 30,000 registered nurses left, leaving behind only 57,000 doctors. In the massive brain drain, 300,000 engineers and other technical personnel sought residence and employment in other countries as well.
If socialism and communism are so great, why are so many people leaving? And once they get wherever their destination is, why are they trying to install through voting the very socialist or communist society they’ve fled? My educated guess is that the deep socialist and communist indoctrination from schools and colleges, coupled with youthful idealism, are hard to overcome.
If Fabian socialism of Western Europe is so enviable and desirable, why are they such a basket case of failed multiculturalism, drug culture, Muslim rapes, and bankrupt governments who tax their citizens to death?
Smart and cautious Venezuelans, who have seen the writing on the wall for a long time, are fleeing to neighboring countries in expectation of worse to come. Nobody wants to leave their loved ones and friends behind but have no choice. I should know, I left everything behind in 1978 and seldom do I regret that decision. But the freedom from communism exacted a heavy toll nevertheless.