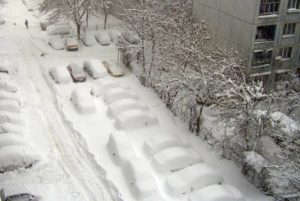 Photo: Florentina Apostolescu
Al Gore is now telling us that the cold winter and abundant snow in the north east is due to global warming, that he was right all along about his dire predictions of years ago that earned him a Nobel Prize, a Golden Globe for his documentary film-making efforts, and other accolades from the adoring environmental left.
Polar bears have not drowned, we found out they are quite good swimmers, and their numbers around the world have quintupled. Nat Geo showed us a video of an emaciated and sick bear, as an example of what global warming is doing to these poor little creatures, tugging at our environmental heart strings.
The polar ice caps have not melted, on the contrary they grew significantly, islands were not swallowed by the sea, ocean front cities are still there and not buried under feet of water as he predicted.
Millionaires with money to burn keep buying and building very expensive yachts, outrageous homes by the sea, and carbon spewing jets. They are not worried about their carbon foot print, only you, devoted minions, who listened to him with reverence and fear, have to drive around in unsafe tin cans, ride bikes, and live in tiny homes in order to save the planet from environmental Armageddon. Environmentalists are laughing all the way to the bank.
Delta is still passing cute little Coca Cola white napkins imprinted with the picture of a mama polar bear and her two little cubs, a symbol of cuteness around the holidays and a reminder that we must preserve such beauty and tranquility in nature while we are flying at 37,000 ft. and sipping our favorite beverages.
As the media escalates its non-stop apocalyptic fixation with climate change and clever scaremongering such as “cyclone bomb,” and “polar vortex,” I can still vividly see the picture of my childhood winters when I walked to school via snow tunnels cut through mountains of piled high white fluffy snow way above our heads, fierce winds cutting our faces with stinging wet snow turned into tiny projectiles, stepping into slush to cross the street, so dirty and deep that sometimes it over-flowed inside my boots, reaching school with wet and frozen feet, necessitating removing the socks and placing them on the heater coils to hopefully dry by the time school was out and the trek back home began. My hands were frozen despite the thick wool mittens my grandma knitted every fall in preparation for the winter onslaught. It was not global warming in the summer, it was not the climate change industry profiteers telling us that Armageddon was near, it was just seasons as we’ve had them for millennia.
When the sun came up it turned everything into a shiny skating rink on which we, the pedestrians often slipped and fell, suffering injuries then or later on in life when arthritis from injuries began to creep up.
If it warmed up more and the snow started to melt, the slush would overwhelm the street drains and we would get splashed by passing buses who were going a bit too fast and too close to the edge of the road for the treacherous driving conditions. Then everything would refreeze when the sun went down, to the delight of children everywhere who could sled with renewed speed or ice skate. God’s nature skating rink was cheap and everywhere.
As children we would stay out all day, building snow men, sledding down the hill into the street below that had little traffic, getting our outside clothes wet. We never felt the elements, we kept on moving and sweating, our coats and pants would freeze, and did not go inside until moms or dads would come fetch us, usually when it started to get dark and the street lights would come on.
I visited the hill of my childhood sledding – it was occupied by high rises and steps had been dug into the hill. In the street below, a menacing pack of stray dogs was coming in my direction. I did not take a chance and returned to my parked car in the street on top of the hill.
Grandma’s village is semi-unchanged except for the asphalted roads. It would be dangerous and hard to pull a sled now on such heavy-trafficked roads. The road drains are no longer the muddy ditches we played in during hot summers. And no, Al Gore, it was not global warming, summers were hot and we sought shade and bathing in the clear river, with the fishes swimming around us.
The college “snowflakes” of today would have to be provided with warm shelters in winter and cool shade during hot summers. They would have no idea how to survive in harsher conditions because they’ve been so chickified and softened. The pioneer spirit that helped their ancestors survive the harsh conditions of the Wild West had sadly demised long time ago.
Today the college “snowflakes” are expert whiners about the “hurtful” words they cannot bear to hear. Take their smart devices away, free birth control, and “recreational” pot, and they are totally lost.