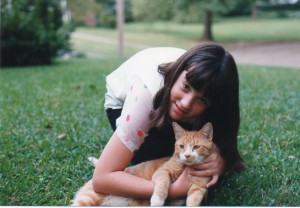 Princess, the cat we babysat for a military family assigned overseas, was pregnant. What a joy! We had no idea because she was a plump kitty. She gave birth on January 18 to three smoke-grey kittens and a yellow one. She dropped him on the garage floor far from warmth and his mother’s care. We found him meowing weakly on the cold cement and we decided to adopt him. Who can resist the determined and lucky runt of the litter with such a will to live? We gave the other three to good homes and returned mom, Princess, to its rightful owners when they returned.

Little Tiger picked up weight rather quickly and became stronger. Playful and brave, he was the first one to crawl out of the laundry basket where we kept the four adventuresome bundles of fluff. He became an indispensable part of our family, ready to cuddle with anyone who napped on the couch, but particularly with my youngest daughter.

He played in boxes, preferred sleeping on freshly laundered and folded clothes, and slid like a pro athlete on ice, diving into empty grocery bags left on the floor. There was no sink in the house or closet shelf he had no slept in.

Tiger fancied himself a dog – he answered to commands like a dog, followed us outside, up and down the street for regular walks and for mom’s daily gardening routine. He watched her and kept her company, occasionally chasing playfully a butterfly or a humming bird.

Tiger brought us a daily live catch and dropped it on the back steps: a tail-less salamander, a gecko, a snake, a mouse, a mole, a squirrel, a bird, or whatever critter crossed his path that was not fast enough to get away from his hunting prowess.

Tiger was fearless! He never backed away from territorial encounters with the neighborhood possum, stray dogs, or the resident raccoons. He would return home often with bleeding wounds from his encounters and with sharp teeth embedded in his skin or nose.

He always lost his cat collar with vaccination info the same day we would return from the vet. He would snag it on bushes as far away as the Lutheran Church two streets over. The priest would often call us to say that he had found Tiger’s collar again. We never bothered reattaching it until he got a new one at the next vet visit. He was not dumb enough to get caught by animal control and everyone knew him already – a more slender and active replica of Morris.

One summer he got stuck in a very tall pine tree in front of the house. To the next door neighbor’s amusement, we had to call the fire truck to extricate Tiger from the tree – he was wedged in very tightly, meowing pathetically.

The same next door neighbor, Mark, who hated cats with a passion, ran over Tiger one morning while backing out of his driveway. We did not know whether it was an accident or not, we just heard tires screeching and never gave it a thought since Mark was very eccentric, he did this often with his motorcycle or truck tires just to annoy people.

Thirty minutes later we found Tiger huddled behind the house, close to the back door, barely breathing and bleeding out of every orifice. He had crawled home to die. We followed the trail of blood to Mark’s driveway.

We rushed Tiger to the vet and he was hospitalized for a week. Doc did not think Tiger was going to make it. We waited and prayed for a miracle. Because Tiger had gained so much weight and had extra padding, he survived the ordeal that would have killed most cats, and lost 25 percent of his weight in the process. We had put him on a diet for a while but he never lost any weight – he was smart enough to steal dog food next door and ate to his heart’s content. One thing for sure, Tiger had used up several of his nine lives during his accident and convalescence.

We brought him home a week later and prayed for the best. He recovered and lived four more years because it was not his time to die and he had some lives left over.

On a beautiful spring day, while we were playing outside, taking pictures, and enjoying the sunshine and mom’s beautiful flowers, Tiger urinated on my daughter’s leg. She was annoyed and surprised; unknowingly, we even captured the moment on camera.

A month later, we left him home alone while we drove to a recital two hours away at Ole Miss. When we returned late that night, we could not open the door, something heavy was blocking it. It was Tiger, lying on the floor in front of the door as if trying to escape. We rushed him to the vet again and this time it was really bad – kidney failure, typical for yellow male cats.

He lingered for one week, we visited him daily at the vet and each time it broke my heart. He would get up and try to come home with us. He was purring even though he was in pain. Cats purr both when happy and when in distress. I prayed for a miracle, I hoped the vet could fix him, but it was not possible.

We decided to do the humane thing and end his pain and misery mercifully. We said good bye one last time, we picked him up, kissed him, and loved him. I could barely watch when they gave him the first injection. His beautiful green eyes were begging me, “Mommy, take me home!” before they closed for the last time.

I took Tiger home one last time – to bury him in the back yard. I was sobbing uncontrollably and could barely see to drive – a flood of tears was washing down my cheeks. Tiger was still warm when I touched his fur. I kept saying, I am sorry, I am so sorry, Tiger, that we could not save you. He was eleven and a half years old. He grew up with my children, was a constant part of our lives, he was our child.

In death, his body seemed much heavier to me. I dug his grave with difficulty in the sloping back yard and buried him after a short prayer. He had given us so much joy and love for so many years! I eventually fashioned a cross with his name on it and planted an azalea bush to mark the spot.

I still own that house – I visited the untended back yard last spring. All my beautiful plants and rose bushes were overgrown with weeds. The cross on Tiger’s grave disappeared but the azalea bush is as tall and as beautiful as ever. He lives in its beautiful blossoms each spring and in our cherished memories and photographs.