On a sunny and breezy May day with baby blue skies and cotton ball clouds, we embarked on a drive to Shenandoah National Park’s scenic roadway. Skyline Drive follows the crest of the Blue Ridge Mountains for 105 miles to elevations ranging from 591 feet in the northern part of the park to 4,049 feet at Hawksbill Mountain, and an altitude of 3,650 feet at Big Meadows with its Lodge constructed in 1939. The park is located only 75 miles from the crowded northern Virginia and Washington, D.C.

For ardent hikers, there are over 500 miles of trails. For drivers, there are 75 breath-taking overlooks. The park’s 101-mile hiking stretch of the Appalachian Trail rests on movable tectonic plates. Rocks born from the compression of these tectonic plates shaped the Grenville range with “ancient rocks that form the base of the Blue Ridge Mountains in and around Shenandoah.” 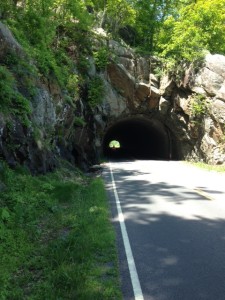 What geologists call “basement rocks” can be seen in Mary’s Rock Tunnel, Old Rag Mountain, and Hazel Mountain Overlook. A thin stream of water is flowing on the rock at the edge of Mary’s Rock Tunnel. It was cut in 1932 through 600 feet of mountain granite (granodiorite) with a clearance of 12 feet, 8 inches. For three months, workers repeated the process of “drill, blast, and clear.” When they broke through to daylight in January 1932, visitors drove through almost immediately. As historian Darwin Lambert explained, the tunnel was designed “partly for show and partly to eliminate extensive scars and expensive rock retaining walls.” 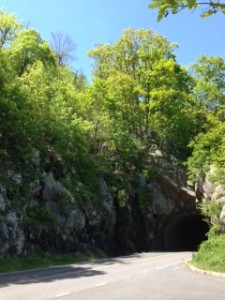 “Greenstone” formations from lava flows 1.2 billion years ago can be seen in Stony Man, Crescent Rock, Indian Run Overlook, and on Skyline Drive. “White quartzite” formations at Calvary Rocks testify to sediments from the Iapetus Ocean billions of years ago.
“Trace fossils” were left behind from an ancient ocean worm.

The Blue Ridge “shunts water east or west into one of the park’s three major river systems – the James, the Shenandoah-Potomac, and the Rappahannock.” According to the National Park Service, “Millions of residents from Newport News to Washington, D.C., drink water that originates within Shenandoah’s boundaries.”

The beautiful vistas, the breathtaking landscape, the forests, the hollows, the meadows, the native and non-native fauna and flora are not exactly “wilderness’ – they are, as FDR said, “the joint husbandry of our human resources and our natural resources.”

A hawk gliding effortlessly over the 3250 feet drop, pushed up by air currents, drew my eye to the dark shadow projected by a white cloud over the forested valley below. It was a reminder that all this beauty before my eyes came at a heavy price that a lot of Americans before us were forced to pay. Millions visit and enjoy this park every year without knowing the sacrifice so many families were required to make.

Around the Big Meadow Lodge, a small deer was grazing on the edge of the road unafraid of the human presence. Shenandoah is home to several hundred American black bears which, luckily, we did not encounter. The most common animals are the white-tailed deer and eastern grey squirrels. Downy woodpeckers and indigo buntings are most commonly observed birds. Baltimore orioles depend on Shenandoah’s forests during seasonal migrations. The streams’ trout population was augmented artificially by 50,000 in the 1930s when game officials stocked the brooks. The rare Shenandoah salamander is the only federally designated endangered species. “Wildlife experts released white-tailed deer, wild turkeys, and a pair of beavers in the park during the 1930s.” A local man who shot the male beaver was arrested and imprisoned for three years.

Rich urbanites came to Skyland Resort in the late 1800s, long before the park was established in 1935. Skyland was a private mountain resort built in the late 1800s by George Freeman Pollock, a naturalist and conservationist. Skyland flourished for 50 years. George Pollock and his wife Addie built Massanutten Lodge in 1911. “Pollock was instrumental in choosing Blue Ridge as the site for the first national park in the Southern Appalachian Mountains. Shenandoah was authorized by Congress in 1926 and dedicated by President Franklin D. Roosevelt on July 3, 1936.” Pollock described the Blue Ridge as “beauty beyond description.”

Conservationist John Muir called for the creation of national parks as a way to preserve the most beautiful western landscapes. He wrote in 1914, “Thousands of tired, nerve-shaken, over-civilized people are beginning to find that going to the mountains is going home; that wilderness is necessity; and that mountain parks and reservations are useful not only as fountains of timber and irrigating rivers, but as fountains of life.”

In 1923, Stephen Mather, the first director of the National Park Service, lobbied for a national park in the East.

To escape the heat and stress of Washington, D.C., President Herbert Hoover and First Lady Lou Henry Hoover had their summer fishing camp built on the Rapidan River in 1928.

In 1924, the Southern Appalachian National Park Committee (ANPC) proposed a “possible skyline drive along the mountain top.” The Skyline Drive Historic District (1931-1951) has been placed on the National Register of Historic Places in April 28, 1997 by the Department of the Interior.

Facilities were built by Depression-era Civilian Conservation Corps (CCC) “boys” in the 1930s. The program FDR launched in his 100 days in office, the CCC, dubbed FDR’s civilian army and Tree Army, worked well. In addition to 3,702 Virginians, CCC hired a vast number of needy unemployed workers who received $30 a month sent directly to their families. These workers were supervised by the military and worked long hours to earn their pay. They were given uniforms, nutritious meals (most gained weight) and lived in camps. After work, mandatory classes taught them reading and writing and some vocational training such as electrician. Competitive events were held between camps during down time. 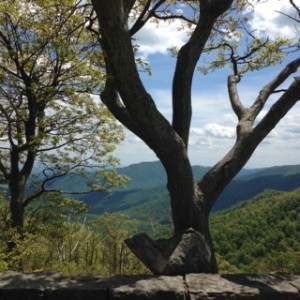 A 1930s forest study “suggests that most of its woodlands were in relatively good shape. Only about 14.5 percent of land proposed for the park remained completely clear of timber and most of the open tracts had been used for crops and pastureland.” (Shenandoah National Park Official handbook, p. 46)

“Park promoters George Pollock, Harold Allen, and George Judd had stretched the truth to the breaking point when they described the proposed park on the Southern Appalachian National Park Committee (SANPC) questionnaire. The land, they said, was ‘mostly held in large holdings’ and ‘absolutely free’ of commercial improvement such as farms, mines, factories, and development. However, the 327,000 acres surveyed in 1927 comprised over 3,000 separate tracts (only about 20 over 1,000 acres) with thousands of people living and working there.”

The road to removal and relocation of the population residing within the proposed parkland included:

Miriam Sizer, a typical elitist, said, “The taking over of this area … means the scattering of a people who have a primitive comprehension of what law means and who have little sense of the responsibilities of citizenship.” She continued, “Thus the submerged mountain individual [is] irresponsible, untrained…unfitted to meet the competition of modern life…” (Shenandoah National Park Museum) 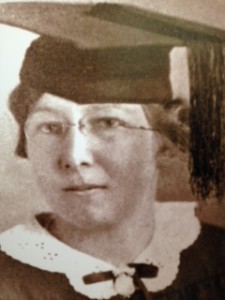 Sizer, a teacher hired in 1929 by George Freeman Pollock and some of his guests to run a summer “vacation school” in the Blue Ridge Mountains, invited two sociologists, Mandel Sherman and Cora Keys, to study her students. The sociologists hired Sizer to collect additional data and published a controversial report. Using questionable methods, the three “researchers” stereotyped the mountain residents who vehemently disputed their portrayal. This bogus study was used to determine the mountain residents’ fate. “At her suggestion, the National Park Service hired her to produce additional data on some of the families who would be affected by the proposed park. She then touted her ‘studies’ as proof the residents could not take care of themselves and began to advocate relocating the residents, promoting herself for a government position managing their relocation and finances.” (Shenandoah National Park Museum)

“Nothing further is recorded about Miriam Sizer in the Shenandoah National Park archives, but her sociological analyses continue to float to the surface, tainted with parochial and nativistic claptrap.” http://www.nps.gov/shen/historyculture/miriamsizer.htm

Removing people as permanent residents on the landscape was a stumbling block to the dream of building a large park in the East. There were promoted “fears” that excessive logging would forever alter the landscape. Residents used fire to clear or semi-clear areas for agriculture and hunting. Promoters of the park over-dramatized the “fear of fire.” They failed to consider the “impact the establishment of the park would have on those who lived within the proposed boundary.”

The federal land acquired meandered around private land and disputes arose between agents and owners when trespassing occurred. Additional land was needed in order to fix this problem.

Citizens protested the proposed removal of land owners off their property by writing to editors. A letter to the editor of “Page News and Courier” in Luray, Virginia said, “I wish to arouse some objections to the proposed Park by the citizens of the area and their sympathizers. In the first place to condemn our property so as to make its commercial value less is contrary to the fundamental principles of our government. … They take from us what they want, seek to make us helpless by enacting condemnation laws before they approach us as owners, which clearly shows that they are trying to get something for nothing at our expense.”

Robert Via, a landowner in Albemarle County, who lost his case in Virginia, appealed to the Supreme Court, challenging the blanket condemnation of properties. His lawyer said, “Whether Virginia has the power to condemn land with the sole purpose of making it a gift to the national government for national park purposes is the only question we are bringing before this Court.” On November 25, 1935, the Supreme Court dismissed the case, “declaring that Via had an adequate remedy at law.” Unfortunately, Via decided not to continue his fight, thus deciding the fate of future eminent domain cases, and “clearing the park’s last legal hurdle.”

According to the park museum, Herbert Melanchton Cliser, a third generation resident, and his wife Carrie, waged a six-year battle to keep their 46 acres farm, gasoline station, and lunch counter famous for its country ham sandwiches and homemade pies. They wrote letters of protest to local authorities, national park officials, Presidents Hoover and Roosevelt. In a 1929 letter to the Page News and Courier, Cliser said, “The fundamental principles of our government are to protect those who can’t protect themselves, and to restrain the rich and strong from oppressing the weak and poor… This thing of taking our property away from us is a pretty business…” Cliser refused the $4,855 payment for his property. Cliser and his wife were evicted in October 1935 by Page County law enforcement officials. During the eviction proceeding, while handcuffed, Cliser sang the National Anthem. (AP, October 3, 1935)

Landowners who were removed from the land received $1,850,000 for 958 tracts purchased in 1934. To get an idea of the purchasing power in 2009 dollars, multiply by sixteen. The park museum lists some of the many individuals who did not receive fair value for their land. One family got a check for $400 for a land that was worth almost $7,000. Other families were forced to go on welfare.

In December 1935, the federal government accepted title to more than 176,000 acres of parkland. Some residents were still living in the area with the understanding that they would be relocated. This relocation was completed in November 1938 when all but 78 residents with lifetime tenancy were moved outside park boundaries.

Currently, the controversy continues. Non-governmental organizations (NGOs) are luring farmers who hold property adjacent to the park to enter into “conservation easements” with “viewshed protection.” In exchange, high property taxes are lowered considerably. The farmers/owners cannot alter the landscape in any way or, if they sell (land values are rising), the new owners automatically sign on to the conservation easement in perpetuity or for the time specified in the easement contract. Local boards working with NGOs change zoning regulations to prevent any construction or alteration to the land that would interfere with the “viewshed” from the Shenandoah National Park.

3 thoughts on “Shenandoah National Park, A Storied Past”