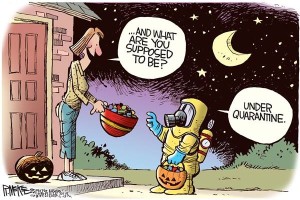 As the ISIS crisis is conveniently ignored right before the election, the main stream media is focusing on the next crisis, the Ebola spread and the schizophrenic response from the CDC. Meanwhile Congress is silent, waiting for guidance on what opinion they should form before they actually do the job they were elected to do, legislate to protect the best interests of the American people.

The Congressional Research Service has issued a report on October 9, 2014, RL 33201, outlining the federal and state quarantine and isolation authority. Jared P. Cole, Legislative attorney, overviewed the state and federal public health laws in regards to the “quarantine and isolation of individuals” when individual liberties will be restricted. http://fas.org/sgp/crs/homesec/RL33201.pdf

Cole describes two measures that can be undertaken by health authorities in order to prevent those infected with or exposed to a contagious disease from infecting others:
– Quarantine (separating individuals exposed to an infection but “not yet ill” from those who had not been exposed)
– Isolation (separating “infected individuals” from those who are not infected)
http://www.flu.gov/planning-preparedness/federal/pandemic-influenza-implementation.pdf

Who is responsible for preventing the outbreak and spread of an infectious disease in the U.S.?
The Secretary of Health and Human Services has the authority granted by Section 361 of the Public Health Service Act to make and enforce regulations “to prevent the introduction, transmission, or spread of communicable diseases from foreign countries into the States.” (RL33201, pp. 4-5)

The HHS Secretary has broad authority to “apprehend, detain, or conditionally release a person.” The Secretary can only do so with communicable diseases that are included in the Executive Order 13295 of April 4, 2003. The diseases listed are cholera, diphtheria, infectious tuberculosis, plague, smallpox, yellow fever, viral hemorrhagic fevers (including Ebola), severe acute respiratory syndrome (SARS), and influenza viruses with the potential to cause a pandemic.

The HHS Secretary transferred quarantine authority in 2000 to the Director of the CDC. Measures for interstate and foreign quarantine are now under CDC’s Division of Global Migration and Quarantine. http://www.cdc.gov/ncpdcid/dgmq/index.html.

Federal regulations authorize the “apprehension, detention, examination, or conditional release” only of persons coming into a state from a foreign country.” Ship captains and airline pilots are required to report immediately the presence of ill passengers on board their vessels. “If found to be infected, such individuals may be detained for such time and in such manner as may be reasonably necessary.” (Cole, p. 5)

If someone becomes violently ill on domestic and international flights, pilots are required to notify before arrival the CDC Quarantine Station closest to their destination airport. Twenty such stations are located at ports of entry into the U.S., assisted by DHS in “the enforcement of quarantine rules and regulations.”

Since we have not stopped flights originating from West Africa where Ebola has reached epidemic proportions, the probability of such infectious persons arriving daily is very real.

The Director of the CDC is in charge of preventing the spread of communicable diseases from state to state.

Cole said, “To prevent the spread of diseases between states, the regulations prohibit infected persons from traveling from one state to another without a permit from the health officer of the state, possession, or locality of destination, if such a permit is required under the law applicable to the place of destination. (RL33201, p. 7)

Cole added that the Secretary of HHS can bar the entry of persons from foreign countries if the “existence of any communicable disease” poses a “serious danger” of entering the United States. The “suspension of the right to introduce such persons and property is required in the interest of public health.” The 2005 proposed rule for this statutory authority was not adopted. (70 Fed. Reg. 71892)

Then there is the Do Not Board (DNB) list which was developed by DHS and CDC and made operational in June 2007. To make this list a person must be:
– Likely contagious with a communicable disease
– Ignorant or non-compliant with the recommended medical treatment (such as someone with antibiotic resistant TB)
– Likely to board a commercial aircraft or boat

At the state level, state police has the authority of quarantine and isolation; time and manner vary from state to state. Most quarantine state laws are 40-100 years old, lacking the contemporary scientific knowledge of communicable diseases. (RL33201, p. 10)

Can an individual have the right to challenge his or her quarantine or isolation?

Some courts recognize the petition for a writ of habeas corpus, to test the legality of the detention. “Often petitioners seek a declaration that the statute under which they were quarantined is unconstitutional.” (RL33201, p. 11)

Here are some legal challenges described in Cole’s report:
– Gibbons v. Ogden, 1824, the Supreme Court “alluded to a state’s authority to quarantine under the police powers”
– Compagnie Francaise de Navigation a Vapeur v. Louisiana State Board of Health, 1902, “addressed a state’s power to quarantine an entire geographic area” (even though commerce was affected, the quarantine was not unconstitutional)
– In another case, the court ruled that “it is ‘well settled’ that states may impose quarantines to prevent the spread of disease even though quarantines ‘affect interstate commerce’”
– Miller v. Campbell City (leaking methane and hydrogen gases prompted an entire area quarantine which was broken by a resident who tried to go home; the court decided that the quarantine was not in bad faith or malicious)
– U.S. v. Shinnick (a female passenger who could not prove vaccination after arriving from a smallpox-infected area in Stockholm, Sweden, was placed in isolation)
– People ex rel. Barmore v. Robertson (woman who ran a boarding house and boarded an infected person, was quarantined in her home as a carrier of typhoid fever)
– O’Connor v. Donaldson (man diagnosed with tuberculosis was hospitalized a few days in New York against his will; the court ruled that a “state’s police powers may confine individuals solely to protect society from the dangers of antisocial acts or communicable diseases”)
– Wong Wai v. Williamson (San Francisco Board of Health “ordered all Chinese residents to be inoculated against bubonic plague, restricting their right to leave the city, citing nine deaths allegedly from plague. The inoculations were tainted, causing severe consequences.”)
– Jew Ho v. Williamson (the quarantine was discriminatory since it applied only to Chinese residents, a violation of the Fourteenth Amendment; it questioned whether the plague actually caused the deaths)
http://fas.org/sgp/crs/homesec/RL33201.pdf

Cole raises the question of potential future legal challenges:
1. Eminent domain
– case of widespread domestic public health emergency, if the quarantine and isolation necessitate private facilities when medical facilities become overburdened
In August 2003, after a heat wave caused 11,000 deaths in Paris, the government took over refrigerated warehouses as temporary morgues.
The State of Washington, after a volcanic eruption, restricted access to a town near the volcano. The court declared the “exercise of police power permissible and did not require compensation.”

2. Self-imposed or home quarantines
– can a “state support a population asked to voluntarily stay at home for a period of time”
– can a state provide “legal immunity to businesses asked to provide facilities for quarantine”

We have the power and rules in place for quarantine and isolation in order to safeguard the health of the people of the United States from illegal immigrants’ communicable diseases like Ebola and the enterovirus D68 which has already killed several children. Instead, Congress is busy playing politics with people’s lives in order to win elections and to support this administration’s immigration policy. Scanning someone’s temperature at the airport is a sick joke.

We are not stopping flights from the affected Ebola zones, and illegal alien children from Latin America are still entering through our southern border, and are still being dispersed among our healthy children. Our soldiers, highly trained for war but sent to West Africa to play doctors, are going to be placed in quarantine in Liberia in the event they should become infected with Ebola, while potentially sick West Africans are still given visas every day to fly to the “racist” United States for first class treatment.

One thought on “Quarantine Quandary”