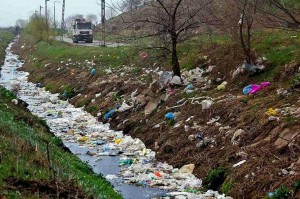 Refugee trash left behind on Europe’s highways
In case you were wondering about the planned invasion of Europe and other developed nations, including the United States, wonder no more. Today, The International Organization for Migration, a United Nations Migration Agency, funded partially and generously with your taxpayer dollars for 65 years, is holding an International Dialogue on Migration in New York, on April 18-19, with the theme, “Strengthening International Cooperation on and Governance of Migration towards the Adoption of a Global Compact for Safe, Orderly, and Regular Migration in 2018.”
I highlighted the words “regular, governance, Global Compact” to illustrate that this vaunted meeting of third world tin pot dictatorships aims to establish and control the global no-borders policy through an on-going flood of migrants to the west, destroying sovereignty and diluting nationality and citizenship. It is not about protecting migrants temporarily from tribal wars and conflict, it is about resettlement of huge populations and forcing multi-culturalism on those countries that resist and wish to maintain their “borders, language, and culture.”
There are millions of refugees around the world who are fleeing conflict in their nations and they must be helped in order to return them safely when the conflict is over. But the European invasion of mostly military age men from the Middle East contains only about 10 percent Syrians who are fleeing the seven-year civil war in Syria, the rest are economic opportunists on a “Hijrah” conquest in the senescent Europe, fast replaced by a fertile Muslim population.
U.N. plans to govern migration through a global compact, a sort of constitution for the rights of everyone to move across national borders unimpeded in another step towards spreading the wealth of a globalist commonwealth ruled by the few billionaire elites and their well-funded “civil society” lapdogs.
They are not shy or hiding the fact that their conference and efforts are part of U.N.’s Agenda 2030 for Sustainable Development, the very Agenda the MSM keeps telling us that does not exist and those reporting on it are conspiracy theorists:
“It is an opportunity for States and all relevant migration actors to frame the core objectives for the global compact, and ground it in the existing normative structures and the 2030 Agenda for Sustainable Development.”
Seeing this global migration as a human right, “the IOM Director General William Lacy Swing said in opening remarks today, “The Global Compact presents a historical opportunity to achieve a world in which migrants move as a matter of genuine choice rather than a necessity; a world of opportunity to migrate through safe, orderly, and regular channels; and a world in which migration is well governed and is able to act as a positive force for individuals, societies, and the States.”
If you want to keep your country and borders safe from unvetted invasion, you want to limit the number of economic refugees and illegals flooding your country, causing violence, rapes, and murders, too bad; the United Nations will override your President who has promised a check on unvetted refugees and a wall on the southern border. The almighty United Nations bureaucrats from New York will override him and the American people’s wishes.
The “needs, capacities, and contributions of migrants” will supersede your national needs because their safety, dignity, and human rights are more important than yours.
The four core elements of this compact, as presented by Ambassador Swing are:
1. Protecting the rights of migrants
2. Facilitating safe, orderly, and regular migration
3. Reducing the incidence and impacts of forced and irregular migration
4. Addressing mobility consequences of natural and human-induced disasters
Louise Arbour, the Secretary General’s Special Representative for International Migration, pointed out that “It is up to all of us to embrace human mobility, and recognize that good migration governance requires a commitment to genuine cooperation. People in transit and destination countries should not be made to look at migrants as burdens, or even worse as threats to themselves or their way of life.”
Perhaps Louise Arbour should pay close attention to the mayhem and violence caused by Angela Merkel’s flood of “rapefugees” in Europe who have destroyed cities and entire areas, raping, threatening, destroying property, harming the local population, and altering their way of life forever, while politicians and the main stream media are ignoring reality and covering up the often savage violence.
Arbour said, “Instead, we need collectively to strengthen the narrative – one which has the virtue of truth – that recognizes human mobility and diversity as a contribution to evolving societies and strong economies.”
The U.N. bureaucrats are not explaining why the male refugees cannot stay in their own countries, fight their tribal wars, end them with a lasting peace, and make their societies evolve and economies strong?
I am not sure on what virtual reality realm Louise Arbour’s version of truth resides, but the lying narrative keeps pushing diversity as a contributing factor of society and strong economies when in reality these migrants become wards of welfare as soon as they enter any country they plan to occupy and they never intend to work. Diversity and multiculturalism in Europe have proven to be utter failures; society has devolved into basket cases of areas that the police avoid at all costs.
As listed by IOM, the conference will be addressed by representatives of “governments, civil society, academia, and the private sector.” Among the speakers are:
– Amina J. Mohammed, U.N. Deputy Secretary General
– Peter Thomson, President of the U.N. General Assembly
– Louise Arbour, Secretary General ‘s Special Representative for International Migration
– Ahmed Hussein, Refugees and Citizenship of Canada
– Permanent Representatives of Switzerland and Mexico
This conference will be followed by the second Global Compact on Migration which will take place on July 18-19 in Geneva, “culminating in the stocktaking preparatory meeting in Mexico in December.” http://www.iom.int/idm-2017-global-compact-migration
The United Nations Agenda 2030 of Sustainable Development is not going away and its goals are relatively close to completion, now to include the forced flood of international migrants around the globe and the obliteration of national borders and sovereignty.