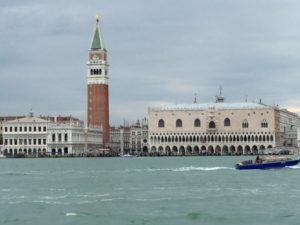 Venice, Dodge’s Palace Photo: Ileana Johnson 2016
During my twenty-two visits to Venice, I saw and heard the frustration and disdain locals have for tourists. We were not just an imposition in their daily lives, crowding their beloved city, their favorite restaurants, water buses, museums, operas, blocking their narrow alleys, their canals, and often entrances to their apartments. We caused wakes with our huge cruise ships and further destruction to their already fragile buildings, infrastructure, and eco-system.
But we were a necessary evil that helped many Venetians live off tourism. They complained about Americans who trekked yearly by millions to see La Serenissima, yet have allowed economic refugees to invade and take over their businesses. We were even blamed for their demographic suicide.
The group Italia Nostra (Our Italy) wants the Italian government to ban cruise ships in the harbor and to require large groups to book their visit ahead of time. Posters around the city make it abundantly clear that some residents do not welcome tourists at all. Academia predicts that “the native population could be zero as early as 2030.” Apparently cruise ship visitors increased five-fold and rents have increased accordingly, making it impossible for locals to afford a place in the city.
I know that apartments in Venice and elsewhere in Italy are passed on from generation to generation, few renters move away. Apartments are seldom available for rent and it has little to do necessarily with the influx of tourists. Perhaps this may be true for potential new Italian residents who wish to move into the city. Like any metropolitan area, especially one so desired, rent is going to be high no matter what the circumstances.
According to Condé Nast Traveler, the famous Santorini Island in the Cyclades began in 2017 limiting the cruise ship visitors to 8,000 per day during the peak season. https://www.cntraveler.com/galleries/2015-06-19/barcelona-bhutan-places-that-limit-tourist-numbers?mbid=social_facebook_aud_dev
If the United Nations succeeds in their desired control and implementation of “sustainable tourism” around the globe, Venetians may get their wishes sooner than they had planned.
And, like everything else the United Nations does very badly, the “sustainable tourism” control will wind up hurting Greeks or Venetians more than whatever damage Americans and Mother Nature itself may have caused to their fragile eco-system, waterways, and way of life.
If you have wondered if there is any area that the U.N. technocrats might not wish to control, the answer is no. They now want to control tourism by adding it to the U.N. 2030 Agenda as “sustainable tourism.”
In case you are wondering how the U.N. can do this, bypass the U.S. Constitution and Congress, how can they regulate and control tourism, remember how, at the local level and without any legislative input from Congress, United Nations has been able to implement its Agenda 21/2030 via property rights modifications at the local and state government level, using progressive realtors, architects, local politicians, “visioning” committees, ICLEI, other regional planning committees and the excuse of global warming, Smart Growth, Green Growth, and Sustainable Development, the lynchpin of U.N.’s 1992 Agenda 21.
From page 8 of the Sustainable Tourism document, “Governments need to enact laws to make the respect for human rights binding for companies and investors working nationally and internationally and to ensure access to legal remedies, as stipulated in the U.N. Guiding Principles on Business and Human Rights.”https://www.tourism-watch.de/files/2030_agenda_internet_en_0.pdf
The United Nations has found tourism as a novel way to milk the capitalist system of money. This 16-page brochure explains that tourism is “one of the most important economic sectors worldwide, with one of the highest growth rates.” Using globalism and environmentalism, U.N. and its third world affiliates in need of more free cash infusions, seek to control this resource as well because, in the process of tourism, first world travelers cause serious CO2 emissions, “with serious consequences for climate change.”(p. 5)
It does not matter that their half-baked scare-mongering theory and tactics have been proven wrong time and time again, they continue with the global warming alarmism, with no backing of real science, just “consensus.”
Companies, investors, governments, and World Tourism Organizations focus on the positive economic effects of tourism. “The 2030 Agenda, however, combines poverty alleviation and sustainability, economic development, environmental and social justice.” Tourists will be thus controlled and travelers will have to pony up more taxes to eradicate world poverty.
U.N. seeks to transform tourism by designing it at the local level in such a way that they can control anybody and any entity engaged in tourism, including the global strategy of emissions reductions, especially in international aviation and shipping. The bottom line, consumers will be picking up the tab and will be fleeced for their tourism. (p. 8)
U.N. aims to reduce carbon emissions by abolishing any “subsidies for climate-damaging means of transport and sources of energy and by forcing prices to reflect “the real costs, including social and ecological costs.” (p. 8)
According to A. J. Cameron, “they will use every means possible to achieve their selfish, unlawful, immoral, and inhumane agenda. They use market-tested verbiage to obfuscate their ultimate agenda. Erik Schmidt thinks most people are stupid, and, unfortunately, the majority of people prove him to be correct. There is nothing good about the U.N., yet it keeps advancing the agenda against little push back by Americans. Never underestimate the greed and lust some men and women have for everything everyone else has!”
Tourism is the new vehicle to swindle Americans and U.N.’s third world bureaucrats know this. Since 1992 Rio conference, technocrats from 178 countries have worked feverishly and tirelessly toward the goal of globalist control under the U.N. umbrella, in-between champagne and caviar dinners at conferences they attend regularly in the world’s most desired tourist destinations, flying in jets spewing their carbon footprint and CO2.