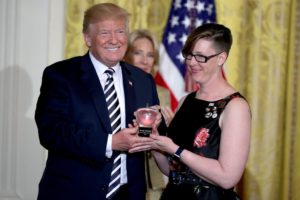 As a former teacher, I was annoyed but not at all surprised by the choice for this year’s Teacher of the Year Award. The recipient with a political agenda showed the nation what an “exceptional teacher” looks like. With her boorish and rude behavior during the ceremony at the White House, she bashed and disrespected our President in front of the entire nation and in front of school children who look up to teachers like her to be objective. Yet many indoctrinate their students into their twisted political world eight hours a day, not into the American-exceptionalism that they should.
President Trump, exhibiting class and respect, mentioned the “incredible devotion that has earned her the adoration, total adoration, of her students and colleagues, the school district, community, and the entire state.” https://www.facebook.com/ijrredpresents/videos/179722432727814/
The petty little ideologue was not just wearing an insufferable smirk the whole time, she was rude and ungrateful and refused to shake the president’s hand or clap when appropriate. Honored for her “adoration” in the classroom, she could not muster the slightest propriety for the moment and the place.
Her rudeness and lack of decorum are a disgrace to the profession. There are so many deserving teachers out there who work in the education trenches every day without being recognized for their work because their politics are of a different kind than the Democrat-sanctioned socialist plantation of Marxist adoration.
Selecting a Teacher of the Year begins at the local level and each school district has their own criteria that tend to match the national guidelines. You will be very surprised to know that parents and students have nothing to do with the selection process even though they say the nominee is adored and respected by the community which they serve. The high ranking administrators form a selection committee composed of administrators, teachers, educational service personnel, student support personnel, and past Teacher of the Year winners and nominees.
Some common denominators are membership in the National Education Association (NEA), American Federation of Teachers (AFT), with their financial support for the Democrat Party, and other university-sponsored organizations who are mills for future teachers.
Teaching awards are nothing but a Democrat popularity contest of who is the most progressive, outrageous, and anti-American progressive ideologues in good standing with the top administrators and other decision-makers who can send that person to the top of the heap.
“According to the criteria for the National Teacher of the Year Program, a Teacher of the Year should inspire all students to learn. Teachers who aspire to this award do not stick to the textbook or traditional methods of teaching.”
The nominees usually push the latest fad in education, currently the Common Core curriculum. The top nominees believe in global education, global citizenship, no borders, the anthropogenic global warming, the rights of the illegal aliens and refugees that trump those of American citizens, alternative lifestyles, Islam over Christianity, and deviant sexual behaviors promoted as the norm and introduced by force into the classroom as early as kindergarten in some states.
Mandy Manning, this year’s awardee, is an English teacher in Spokane, Washington, and teaches refugees and immigrant children from countries like Syria, Iraq, Afghanistan, Guatemala, Myanmar, Mexico, and Tanzania. It is no surprise that a political person like her would be chosen as spokesperson for an entire profession. https://www.yahoo.com/news/mandy-manning-teacher-handed-trump-080024349.html
No mention is made whether these immigrant children are legal or illegal as it does not matter to liberals if we follow the law as long as we have more future Democrat Party voters in our midst.
Is it any wonder that such “educators” are turning our children into communist agitators and snowflakes, with no allegiance to our country, our history, our sovereignty, our flag, our pledge of allegiance, God, and to a sound education?
This teacher of the year affronted our President the entire time. If she is the teacher of the year, the best and brightest that our country can produce, what must the rest of the teachers be like?
Based on the buttons she was wearing during the ceremony, a rainbow apple, Transgender Rights, Women’s March, and the letters she gave the President from her immigrant students, this person obviously puts the interests of immigrant children, refugee children, and a women’s movement that embarrasses at least half of this country’s female population ahead of America’s students’ interests.
Whatever happened to teaching reading, writing, American history, American exceptionalism, science, and American civics objectively, without the teacher’s political agenda being front and center eight hours a day?