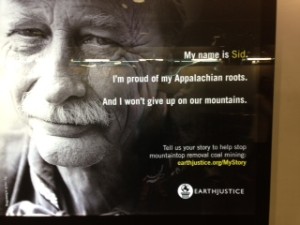 I was in a terminal at Reagan National Airport recently and an electronic ad drew my attention. It was the beautiful face of a middle aged gentleman creased by time, worries, and hard work. He introduced himself as Sid. “I’m proud of my Appalachian roots,” he said. “And I won’t give up on our mountains.” In smaller letters, at the bottom of the ad sponsored by Earth Justice, earthjustice.org/MyStory, was one sentence, “Tell us your story to help stop mountaintop removal coal mining.”

I became intrigued and decided to check this story out. After all, I want to keep mountain tops intact and our environment as clean as possible. I love nature and marvel at God’s magnificent creation. I also realize that nature can unleash so many disasters on our planet that land formations are forever destroyed and areas no longer look the same.

The issues she described involve both the critics and the proponents of this type of mining:
– Critics want it stopped entirely because the mining fills the valleys with tons of broken rocks and dirt, affecting stream water quality and the habitat of aquatic life and wildlife
– Proponents claim that it is not economically feasible to discharge the rock and dirt somewhere else and this type of low sulfur coal is needed
– Environmental groups were able to stop mountaintop mining project permits at the federal district court level, sometimes overturned on appeal, and then reversed again
– Environmental criticism caused “some regulatory changes” to reduce the harmful environmental impact from mountaintop mining in Appalachia
– Environmental groups were critical that the EPA’s restrictions did not go far enough with the enhanced permit review process
– The additional scrutiny has angered the coal industry; EPA has vetoed a mine permit in West Virginia, was overturned by a federal court, and that ruling was recently reversed on appeal
– 111th Congress sought to restrict the practice of mountaintop mining but also issued legislation to block the Obama Administration’s regulatory actions
– 113th Congress introduced bills to clarify or restrict EPA’s authority to veto Clean Water Act (CWA) permits issued by the Corps (H.R. 524 and S. 830)

According to federal law, the rock, broken with explosives and moved with massive draglines, a type of earth moving equipment, must be placed back in the mined areas, “returning the lands to their approximate original contour.” That is something hard to do since broken rocks take up more volume than the original intact boulders, and any pile of broken rock becomes unstable. Thus the excess rock is “typically placed in valley fills on the sides of the former mountain,” burying streams flowing through the valleys, stream chemistry is harmed, and aquatic life is impaired downstream.

Why is mountaintop mining then popular? According to the Congressional Research Service Report, there are three main reasons:

1. “There is a demand for the relatively clean-burning, low-sulfur coal found in Appalachia.
2. Coal supplies near the surface have been significantly depleted.
3. The development of large surface mining equipment (draglines) can move 100 cubic yards of earth in a single scoop.” (p. 1)

Section 404 permits are issued by the “Corps for the discharge of dredged or fill material, using guidelines promulgated by EPA in conjunction with the Corps.” Permits are issued for a “particular site and nationwide (general) for categories of discharges that are similar and have a minimal impact on the waters of the United States.” Enforcing the Endangered Species Act (35 U.S.C. par. 1531) and the Fish and Wildlife Coordination Act (16 U.S.C. par. 661) is the responsibility of the U.S. Fish and Wildlife Service (FWS) which considers how fish and wildlife are impacted and ensures that endangered species are protected. (p. 3)

I have seen a mountaintop mine in Pennsylvania and I can attest that it was unsettling to see a barren and dark grey area which used to be covered by lush forests and mountainous landscape. It reminded me of a lunar landscape.

At the same time, everything we do in our modern life involves the use of electricity which is primarily obtained from fossil fuels, especially coal. I don’t want to reverse our daily life back to early middle ages – I prefer a carefully managed middle of the road approach to “stewardship” of the environment, to use a word highly over advertised by Agenda 21 proponents. If we are not willing good stewards of everything, we must be nudged and forced by the deciders of what is good and proper – liberals, environmental NGOs, and the EPA octopus.

I am not sure environmentalists are willing to give up all their electronic gadgets, homes, cars, and everything else that is based on fossil fuels and electricity generated with fossil fuels, and move into caves. Renewables, at the current state, do not provide enough energy to supply over six billion people with their daily power needs.

Erosion of mountain tops occurs naturally over time due to wind, rain, ice, snow, avalanche, and deforestation from tree disease, unusual droughts, fires, earthquakes, volcanic eruptions; it is not solely caused by man-made activity such as tree cutting and coal mining.

The Earth Justice website paints a bleak picture of strip mining which has “devastated Appalachia,” claiming that “in the past few decades, over 2,000 miles of streams and headwaters that provide drinking water to millions of Americans have been permanently buried and destroyed. An area the size of Delaware has been flattened. Local coal communities routinely face devastating floods and adverse health effects.”

If so many miles of streams that provide drinking water to millions had been buried, how do these millions get their drinking water? I also wonder if the cancer rate and lung-related illnesses are higher in these areas and if so, do we have factual evidence?

The 13,000 plus people who added their signatures on the Earth Justice website are demanding an end to mountaintop strip mining. Beautiful, young, and smiling faces, writing from various campuses around the nation, add their support to the cause of protecting “the people, communities and waters of Appalachia.”

I pondered how many real miners and those employed in mining-support jobs are members of these environmentalist organizations (NGOs) and if they are on board with losing their jobs and their livelihoods derived from mining activities. I also wondered how many communities were actually relocated because of mountaintop mining. Come to think of it, was re-settlement of mass populations not one of the goals of Agenda 21?

I checked the website for links that connected to medical studies, CDC illness data, cancer rates related to mountaintop strip mining, but I must have missed them.

Southern Appalachian Mountain Stewards (SAMS) are “concerned community members and their allies who are working to stop the destruction of our communities by surface coal mining, to improve the quality of life in our area, and to help rebuild sustainable communities.”
The citizens are concerned about the new mountaintop coal removal project in Dickerson County, Virginia. SAMS, the Sierra Club, and allies have asked the EPA to deny permit for this mine because it “would destroy local communities, pushing people out, property values down, and hope for a better tomorrow away. This mine would poison local streams that provide an economic lifeline through growing eco and adventure tourism in the area.” I am not trying to diminish these grievances, but what is eco and adventure tourism? Is that euphemism for hiking? http://www.samsva.org/

The alternative proposed is to build U.N. Agenda 21’s sustainable communities. Agenda 21 advocates for solar energy, wind energy, biking, no cars if possible, walking, commune type living that does not harm the environment at all and leaves as little human foot print as possible. Exempted, of course, are the Hollywood types, politicians, billionaires, and elites in general who can own as many jets, McMansions, and expensive cars as they can possibly afford. Their use of fossil fuels is perfectly excusable; they are the all-knowing elites who tell us what to do.

Kentuckians for The Commonwealth are an organization formed by a “community of people, inspired by a vision, building new power and a better future for all of us. Together, we organize for a fair economy, a healthy environment, new safe energy and an honest democracy.” I’ve seen this word, vision, before, used in the “visioning committees” of ICLEI, the infiltrating agents among city planners who developed Green Growth/Smart City rezoning around the country in line with Agenda 21 goals, land owners be damned. If rezoning does not work, eminent domain is a powerful tool of land confiscation in the name of public good. Like the light purple rail being built in northern Virginia – a country club fought with developers and won some concessions because the rail was an ugly addition to their green grass golfing paradise. But 100 or so homeowners were not so lucky, they were bought out.

This particular organization’s vision involves “good jobs without damage to the water, air, and land,” “companies and the wealthy pay their share of taxes and can’t buy elections,” people have health care, shelter, food, education, and other basic needs,” “children are listened to and valued,” “discrimination is wiped out of our laws, habits, and hearts,” and “voices of ordinary people are heard and respected in our democracy.” I honestly don’t know what all the above community organizing/social justice/children belong to the community/election/progressive propaganda has to do with mountaintop strip mining and I am not sure that good jobs exist or any jobs without coal generated energy or jobs that don’t do any damage to water, air, and land. Even teaching, preaching, or indoctrination is not entirely environmentally damage free. They do exhale CO2 just for starters. http://www.kftc.org/about-us/mission-vision

At this point, I was tired of searching these propaganda websites. I did not see one miner who advocated for the loss of his job and of his livelihood in order to give these organizations and their supporters their pristine land back without any human footprint or coal exploration.

According to the Appalachian Regional Commission (ARC), mining is the most highly concentrated industries in Appalachia (1.58 times the national share) and mining had the highest job growth in 2000-2008 (39.7%). http://www.arc.gov/images/appregion/Sept2011/EconomicOverviewSept2011.pdf

The Kentucky Energy and Environment Cabinet (KEEC) reported that a total of 12,342 people are working in Kentucky coal mines, the lowest number on record since statistics were kept in 1927.

As the EPA bans the construction of new coal-fired power plants unless carbon capture and storage technology are used, an impossibility since capture and storage are not commercially available yet, more mines will be closed and miners will lose their jobs.

While denying that a “War on Coal” exists, the Obama administration provided $8 billion in loan guarantees to biofuels, carbon capture, and storage technology development.

The onerous EPA sent its Alaska Environmental Crimes Task Force dressed in full body armor to check water quality in Chicken, Alaska, a gold mining town of 17 full-time residents and dozens of seasonal miners. Sean Doogan reported that miners were surprised that such drastic measures were taken instead of just showing up and taking water samples. http://www.alaskadispatch.com/print/article/2013/gold-miners-near-chicken-cry-foul-over-heavy-handed-epa-raids
As I look back at the electronic ad in the airport, I wonder, what our green energy quota will be in this country, as utilities will struggle to meet the outrageous demands coming from the federal government, while more and more coal-generating power plants will be closed, and more miners will lose their jobs. Mining will become the elephant in the room relic while we will strain our eyes to read by an anemic CFL bulb mandated by the EPA, said bulb requiring a Hazmat suit to dispose of in case it breaks. Our nights will be very dark in the near future with less ambient light in the sky. What will happen to nightlife in Vegas? Will United States’ night view from space be like North Korea’s?

One thought on “Coal Miners and Mountaintop Strip Mining”