It’s five a.m. and the bright full moon is casting dancing shadows in the hawkish wind. The dense, tall trees are creaking in the back yard forest with giant limbs swaying. The air is cold and dry; it has not rained in several days.

It’s a far cry from the balmy Florida yesterday. We got up at 6:30 a.m. to watch the sunrise over the ocean. Joan’s cottage is five minutes from the beach. In the salty damp warm air, the street greeted us with pitch blackness. The island has no street lights. The only ambient light comes from the moon and the stars and they were not providing much brightness. Our eyes adjusted to the dark and we walked in silence. I could hear the small geckos scatter in front of our feet. They were everywhere, like tiny beige Velociraptors. The lush tropical vegetation, especially the clustered and dense palm trees secluded any possible light coming from homes nearby. Many were shuttered for the winter season.

I did not see any Palmetto Bugs, the lovely euphemism given by Floridians to huge cockroaches but I cleaned their unpleasant presence in the shower and in the kitchen. I was busy vacuuming for a little while when we first arrived. The cottage had been closed for five months. While in the back yard, I saw a beautiful green snake slither between the tall grasses and the crushed sea shells. I could not search anything to see if it was poisonous or not. We had no Internet, no radio, no television, and very poor phone reception. We were not cut off from the world but it felt this way, not being tethered to some instantaneous form of communication. After a while, we got used to it and enjoyed life more and each other’s company.

It is October but the temperature was 88 degrees every day in Siesta Key. The ocean water was a balmy 82 degrees. We made our way to the beach groping in the dark. The damp sand felt soft and velvety under our feet. There was not a soul anywhere, just the thunder of the waves crashing into the rocky pier nearby. Erosion is a problem – large boulders and a rocky pier control some of it. A curious and unmoving crane perched on a rock is peering at us in the darkness.

We started walking in silence along the shoreline; the sun will rise on the left at 7:24. It was pointless to shoot pictures – it was too dark. Here and there flocks of sea gulls were still nesting noisily for the night. They did not scatter when they saw our shadows approaching. Waves lapped at our bare feet – I was surprised by the warmth of the ocean so early in the morning.

The tides left pools of water on the beach during the night. They will evaporate when the sun comes up. Small globs of jelly fish pick up the light. A ring of newly abandoned shells follow the shore line. Sea weeds and curiously long cucumber-like plants are scattered along the way. We walked for a good half hour before a tiny sliver of light emerged. Slowly, the sky changed color, becoming a milky dark grey, then hues of dark blue, light blue, and finally rays of pink fanning across the sky, breaking through the dark blue like projector lights on nature’s stage. The ocean appeared bluer from its ominous navy darkness.

I imagined the ocean depths teaming with creatures large and small and felt a twinge of tightness in my chest visualizing how quickly a human would succumb to such a hostile environment. Yet it was so beautiful! The sand took on the color of pink. Behind the condos dotting the beach, a dark orange light emerged, mixed with darkness. At exactly 7:24 a.m. an intense orange orb appeared. I looked around and saw several people walking the beach, searching for sea shells and a lone fisherman, knee-deep in water. The waves were not too fierce. The sea gulls flocks took off now when more humans approached. The crane was gone. I took pictures of the beach saturated with color. The fascinating palette flooded my eyes with shades of gold, yellow, pink, orange, and blue. 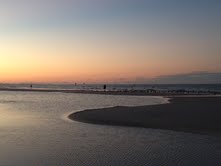 On our way back, we stopped at the Broken Egg, our favorite outdoor breakfast café, where they make the best omelets and a famous buttermilk pancake the size of a huge plate. If it is a place where locals line up to eat and have their favorite table, I know the food is delicious and cheap.

I must not forget Captain Curt’s crab and oyster bar, the first place winner for the best New England clam chowder competition that took place in Newport, Rhode Island. It was delicious! The place was hopping with locals and tourists every night.

The day before, while frolicking in the emerald green crystalline waters, I stopped in awe and fear when three small sting rays gently glided past me in the ocean. All I could think of was, please don’t flip your tails. I encountered fish of all sizes, glittering silver in the waves. One blue mid-size fish, resembling a marlin, swam slowly close to the surface; he appeared to let himself be carried by the warm surface currents.

I could not tell that thousands of miles away tropical storm Karen was brewing. Once in a while I felt a cold current bathing my feet. On our last day, the ocean became furious and agitated, the perfect time to surf on the tall waves. We were alone on the beach, a bit cloudy at first, a lone surfer watched like a hawk by the lifeguard on duty. A five minute quick rain drenched us while we sat in our chairs watching the surfer battle the waves. The sun came out, everything dried and the rest of the day was lovely, snoozing by the sound of crashing water with this paradise all to ourselves.

Siesta Key was voted number one beach in the country in 2011. Why travel to faraway lands when we have such a fantastic jewel in Florida?

Florida was the best acquisition to the United States string of pearls. According to the 1819 Adams-Onis Treaty, Spain ceded Florida to the United States for $5 million and the promise that America would renounce any claims to Texas that they might have had from the Louisiana purchase. Alternately, the Spanish, the French, and the British ruled over this strip of heaven.

But Sarasota and its keys, with the most beautiful beaches in the country are its Tahitian pearls. The dunes, the tall grasses, the sugar white sand, the emerald green waters, the balmy climate, and the lush vegetation blooming year round make it one of the best in the world.

According to some historians, conquistador Ponce de Leon named the peninsula in April 1513, La Florida (flowery land) because of the Spanish Easter Season named Pascua Florida (Flowery Easter). The lush vegetation was in bloom at the time when he landed. From 1630 through the 18th century, La Florida was also known as Tegesta, after the Tegesta tribe, as it appeared on a Dutch map of cartographer Hessel Gerritsz.

Sarasota is a retirement heaven judging by the numerous hospitals and clinics everywhere. It was not the height of tourist season, some stores were closed for fall, but many were empty, victims of the terrible mismanaged economy of the last four years.

The Lido Beach area in St. Armands Key was hopping with rich tourists, some speaking Arabic, and a wedding party; a lovely couple had just tied the knot on the beach at sunset. Year-round rich locals come out in the evening in the Harding Historic Circle for a promenade with their leashed dogs or in infant strollers and to have dinner at their favorite European style cafes. Our eating experience at the four-star restaurant Crab and Fin was a disaster.

St. Armands Key was an oval shaped, 150-acre uninhabited island when John N. Ringling (1866-1936) purchased it in 1923. Ringling planned a community of expensive homes with a central park. The Harding Park was named after his friend, President Warren Harding (1865-1923).

St. Armands was opened in 1923 when the bridge to the mainland was completed. Mediterranean and Spanish style homes were built after 1945 and more residential and shopping areas were developed later.

I learned that on January 16, 2001, Harding Circle with its associated medians and boulevards was placed on the Register of Historic Places for “its unique early planning and development.” The residents view this designation with pride and accomplishment.

The area is now dotted with lovely white marble statues, a stark white contrast to the green palm trees and flowering bushes. The Allegory of Sarasota, one cluster of statues representing the seven virtues “conceived and designed by Edward Pinto,” is looked upon with approval by the statue of a benevolent Michelangelo:

Downtown Sarasota proudly displays a huge statue called “Unconditional Surrender,” created by sculptor J. Seward Johnson, the anonymous kiss between a soldier and a nurse, a symbol of freedom, a celebrated moment in the history of our nation marking the end of WWII. Jack Curran bought the sculpture and, with the help of various Sarasota county veterans organizations, donated the sculpture to the city of Sarasota.

Sarasota was once the winter home of the Ringling Brothers and Barnum & Bailey Circus. The cultural attractions include the John and Mabel Ringling Museum of Art (1927), a 66-acre estate on Sarasota Bay, the Mote Marine Laboratory (1955), Selby Gardens (1975), Van Wezel Performing Arts Hall (1968), Florida West Coast Symphony (1949), College of Art and Design (co-founded by Ringling in 1931) and many others.

But for me, the salty ocean water, the spray, the breeze, the spectacular sunsets and sunrises, the pelicans diving for food, the majestic cranes, sand dunes with native grasses tall and willowy in the wind, the turtle nests, and the snow white sand are the main attraction. I cannot have enough napping by the sea, watching nature unfold before my inquisitive eyes, and playing like a kid in the ocean surf.