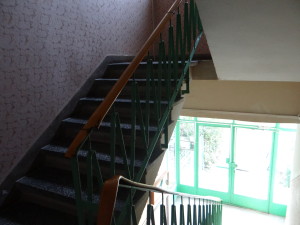 The stairs we climbed every day to our 5th floor, 400 sq. ft. apartment
The UN Commission on Global Governance reported in 1995, “The concept of national sovereignty has been immutable, indeed a sacred principle of international relations. It is a principle which will yield slowly and reluctantly to the new imperatives of global environmental cooperation.” (United Nations, Our Global Neighborhood, The Commission on Global Governance, 1995, Oxford University Press)
It seems that our national sovereignty is yielding quite fast on the southern border without Congressional input, under the guise of a socially engineered humanitarian crisis. They could not erase national sovereignty fast enough in the name of “environmental cooperation.”
The progressives’ social engineering projects implemented around the world are not limited to just destroying national sovereignty, language, and cultural identity. Those who grew up under communism are familiar with the Soviet style, mass movement of entire villages to high density urban areas.
Social engineers had decided that land was better used in co-operative farms owned by the communist government. Private homes located on farm land were bulldozed and people were moved into densely populated cities with grey concrete apartments of 400-500 square feet, mushrooming practically overnight. They could not build them fast enough. Often it necessitated moving two families into a 600 square feet apartment, sharing the kitchen and the bathroom.
The Chinese have embarked on large scale social engineering over the next ten years, in their quest to move 250 million people from rural areas into high rise, high density newly built ghost cities that are currently uninhabited; few citizens have purchased the tiny apartments and few stores leased the bottom floor spaces.
“The government, often by fiat, is replacing small rural homes with high-rises, paving over vast swaths of farmland and drastically altering the lives of rural dwellers. So large is the scale that the number of brand-new Chinese city dwellers will approach the total urban population of the United States — in a country already bursting with megacities.” http://www.nytimes.com/2013/06/16/world/asia/chinas-great-uprooting-moving-250-million-into-cities.html?pagewanted=all&_r=0
In this country, city planners who oppose urban sprawl and begrudge the average 2,300 square foot homes as environmental destroyers of the planet, have designed and built living units of 140-200 square feet, called aPodments in Sammamish, Washington. Resident Judy Green “shares the kitchen with seven other tenants on the second floor.” To get to her loft cubicle, she must climb six flights of stairs. Because of non-existent global warming, cars and elevators are not allowed. The “micro-units” are smaller than a hotel room and rent for $600-900 per month. I checked with my favorite hotel chain – their average hotel room is 375 square feet. The average jail cell is 6 feet by 8 feet. http://www.komonews.com/news/local/Tiny-aPodments-causing-big-controversy-in-Seattle–224002631.html
The “eco-progressives” use local government zoning to impose their ideas of “sustainable urbanism,” “sustainable communities,” and “equitable communities,” by changing the counties’ desired low density character and scale to high-density crime-ridden slums.
In Fairfax County, Virginia, the Board of Supervisors and the Planning Commission are crafting a plan to place Lilliputian slum dwellings in every area of the county. The Residential Studio Units (RSUs) will have a total surface of 220-320 square feet. Each high-rise will contain 75 such units and one parking space per unit. Locals object to the plan because it will reduce property values, change neighborhoods, increase population density, exacerbate the existing traffic congestion, and increase crime under the guise of “affordable housing” for the poor, low wage workers, and “diversity.”
“Social engineering is on the verge of being imposed on entire neighborhoods,” said Rush Limbaugh in a brilliant tirade. The Department of Housing and Urban Development (HUD) will dismantle local zoning and force people to move into certain areas in order to achieve what they consider “racial, economic, and ethnic diversity.” This is “nationalizing neighborhoods” on a grand scale for our “own good and to achieve utopia.” By obliterating zoning regulations, we will have neighborhoods by government quota. (Rush Limbaugh EIB monologue, September 12, 2013)
Reality television is now indoctrinating Americans into accepting the idea of micro-dwellings with the July 2014 debut of “Tiny House Nation” on the FYI channel. According to their website, “renovation experts and hosts, John Weisbarth and Zack Giffin, travel across America to show off ingenious small spaces and the inventive people who live in them, as well as help new families design and construct their own mini-dream home in a space no larger than 500 square feet. From a micro-apartment in New York City to a caboose car turned home in Montana to a micro-sized mobile home for road tripping – this is a series that celebrates the exploding movement of tiny homes.” http://www.fyi.tv/shows/tiny-house-nation/about/season-1
Perhaps “extreme downsizing” is the dream of retired people or the reality of young Americans who live with several roommates or in the basement of their parents because they cannot afford to buy a normal home on low wages driven by a mismanaged economy. What I do know for sure, this not an “exploding movement of tiny homes” and it has nothing to do with “financial independence.” Most Americans have never heard of such tiny dwellings, love their spacious homes, and are not remotely aware that they are an intricate part of a larger plan of social engineering people off the land, out of suburbia, and into inner cities. It is certainly not the new American dream; it is the new forced reality as envisioned and carefully planned by the elite’s UN Agenda 21.
Has anyone seen any influential people, CEOs, wealthy people, politicians, actors, Hollywood producers, radio and TV mouth pieces, lobbyists, corporatists, crony capitalists, who advocate that we live in spaces slightly larger than a jail cell and drive tin cans, give up their large mansions and multiple homes around the world, their jets and yachts?