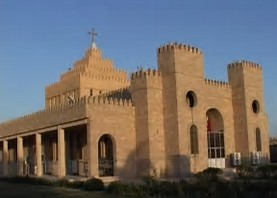 Photo: Wikiwand.com
As western civilization is on a quest of self-destruction, tripping over itself to move and distribute around the world millions of mostly military-age Muslim men categorized as “Syrian refugees” by the International Office of Migration, even though many are not from Syria, an underfunded organization, SaveTheChristians.com, is trying to save what is left of the Christians residing in the Middle East, particularly in Iraq.
These Muslim men seeking economic welfare and wealth redistribution have created havoc in Europe, rapes and crimes incomprehensible to the civilized world, and the elites who brought them in have turned a blind eye and deaf ears to the cries of their citizens who understood that these religionists of peace are never going to assimilate into our western culture, accept it, or even co-exist with Christians, they want Sharia Law and a world Caliphate.
Ezra Levant, in his crowdfunding letter, reminded us that “during the Holocaust, many righteous gentiles helped save Jews from genocide. As a Jew, I feel a special responsibility to do my part, now that Christians in the Middle East are facing their own genocide.”
Why would Christians not help their own Christian brethren in the Middle East? Why are westerners helping Muslims? Nobody is committing genocide against Muslims. Yet there are ancient Christians called Chaldeans in northern Iraq who are being systematically murdered for their faith.
Chaldeans still pray in Aramaic, the language of Jesus. As Levant described, “They’ve fled Muslim terrorists who kill Christian men and rape Christian women and girls as young as nine years old.”
To the question, why are these Christians not going to refugee camps, the answer is simple – those camps are dominated by Muslim radicals.
Ezra Levant continued, “Even in refugee camps, the Muslims attack the Christians. So the most vulnerable people never get help. And it’s why Syrian refugees to the west are overwhelmingly Muslim – they’re being chosen from these Muslim camps.”
Faith Goldy and a team of videographers are going to tell the story of the “deliberate ethnic cleansing of the oldest Christian community in the world, in the Biblical land of Nineveh.” Levant hopes that perhaps this documentary will bring awareness and alarm the rest of the civilized world.
The group will take with them enough food for 750 families – bottles of cooking oil, canned tomatoes, bags of sugar, and tea. “Staples like that will help a family for weeks, maybe a month,” said Levant.
The humanitarian mission hopes to raise $10,000, a modest sum by any measure. It looks like a drop in the bucket considering that the United Nations is spending one million dollars every two hours on Muslim refugees from the area and they are not threatened by annihilation.
Levant believes that “the Muslim refugees are well taken care of – by the U.N., by Angela Merkel, by Justin Trudeau, by the media,” but nobody takes care of the forgotten Chaldean Christians. The crowdfunded donations will be used for humanitarian relief in northern Iraq and for Chaldeans fleeing from the genocidal religionists of peace. https://www.therebel.media/savethechristians