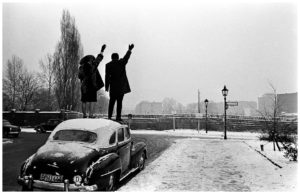 West Berliners waving to relatives across the Berlin Wall, Christmas 1961, Photo: Wikipedia
At the end of World War II, the victorious Allies divided Germany from 1945 to 1949 into four sections, each administered by a different allied country, in order to prevent the spread of Nazism (National Socialism). END_OF_DOCUMENT_TOKEN_TO_BE_REPLACED