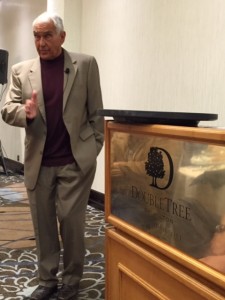 Jay Lehr, Ph.D. Photo: Ileana Johnson 2015
“It’s time for the national EPA to go. The path forward is now clear and simple: A five-year transition from a federal government bureaucracy to a Committee of the Whole composed of the 50 state environmental protection agencies.
To those who say this would fail to adequately protect the public’s health or the environment, I urge you to reflect on the poor job currently being done by EPA, and then to meet some of the men and women staffing state EPA offices and see for yourself the sophistication, commitment, and resources they have to do the job. You will not remain doubters for long.” – Jay Lehr, Ph.D. END_OF_DOCUMENT_TOKEN_TO_BE_REPLACED

Folsom Lake
Photo credit: KTVU Channel 2
Another co-founder of Greenpeace, Patrick Moore, a Canadian ecologist who was a member from 1971-1986, told the Senate Environment and Public Works Committee, “After 15 years in the top committee I had to leave as Greenpeace took a sharp turn to the political left, and began to adopt policies that I could not accept from my scientific perspective. Climate change was not an issue when I abandoned Greenpeace, but it certainly is now.” He said that environmental groups use “faulty computer models and scare tactics in promoting claims man-made gases are heating up the planet.”
END_OF_DOCUMENT_TOKEN_TO_BE_REPLACED