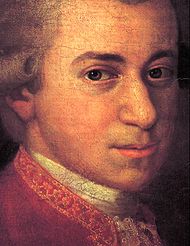 Wolfgang Amadeus Mozart
Photo: Wikipedia
The “enlightened” and multicultural” public from Cluj Napoca attended recently Karl Jenkins’ The Armed Man, a Mass for Peace, an “opera that included a Muslim muezzin chanting the call to prayer.” It was a thinly-veiled attempt to force Romanians to accept the Cultural Marxism agenda of the European Union which is implemented through the heavy islamization of Europe’s population. END_OF_DOCUMENT_TOKEN_TO_BE_REPLACED